Whether you find “Lovesong” refreshingly coy and teasing or frustratingly disingenuous and safe in its depiction of two longtime girlfriends whose attraction tiptoes beyond the platonic will likely be in the eye of the beholder.

On the plus side, the ladies who semi-lust are Riley Keough (Elvis Presley’s granddaughter and an ISA nominee for "American Honey") and Jena Malone ("Donnie Darko"), both stunningly watchable and talented actresses. This is one of those films that puts most of its trust in longing looks and knowing glances rather than idle chitchat and big confessionals to carry a story. And, for the record, that is fine with me. Thankfully, both of the leads possess intoxicating smiles and profoundly expressive blue eyes—Keough’s are a smoky marble while Malone’s are aqua-hued—that serve to fill in many of the emotional blanks that are left unsaid.

Director and co-writer So Yong Kim achieves a delicate, naturalistic tone both visually (many scenic outdoor settings involving rain, bodies of water or both) and melodically (a mostly soothing heart-fluttery soundtrack) that is underlined by handheld camera close-ups. For added interest, she splits her drama into halves, each focused on reunions between Keough’s Sarah and Malone’s Mindy that take place three years apart. The entangled thematic thread that connects the two appears to be the institution of marriage as it affects their own not-fully-defined relationship.

When we first meet 20-something Sarah, she is a rather listless and moody mother of Jessie, a curious and headstrong three-year-old (played by Kim’s same-named daughter with writing partner, producer and husband Bradley Rust Gray). In a remote home near Pennsylvania‘s Pocono Mountains, Sarah’s lonely solitude is briefly broken by a frustrating laptop video chat with her husband (filmmaker Cary Joji Fukunaga), who confirms that his current business trip won’t be ending any time soon.

Sarah’s dreary outlook brightens (she mentions she takes pills at one point, presumably for depression) and Jessie is delighted when free-spirited Mindy arrives from New York City bearing much needed moral support—as well as alcohol—as the trio take a road trip together. They go to a rodeo, where Mindy flirts a little too willingly with a cowboy, and later share youthful memories and details about their sex lives late into a booze-filled night. A touch lingers, a kiss is exchanged and then, just like that, it’s daylight, and we’re back in the car on the way to an amusement park. There, Kim makes the most of a Ferris wheel ride when Jessie urges her mom and Mindy to gleefully scream as they go round and round. But the fun is cut short when Mindy suddenly decides to buy a bus ticket back home.

Jump ahead and we are on another road journey, this time to the outskirts of Nashville. Mindy is about to be married and Jessie (now played by the director’s older daughter, Sky) is the flower girl. And this is where a female director comes in handy. I love that Kim smartly telegraphs the current status of her main female characters by the change in their hairstyles. Whereas Mindy’s earlier bleached-out bob had a waifish allure, she is now an intense redhead. And Sarah, who has rid herself of her always-absent spouse, is calm and confident—as emblemized by her sleek locks that were previously humidity-kinked and messily pulled back.

Clearly, they haven’t had much communication in the intervening years. But now it is Sarah who is steadfast and reassuring while the bride-to-be is a wreck, overwhelmed by her good-guy groom’s relatives and their friends as they gather for the weekend. She hasn’t even picked out her dress yet. Despite being all but ignored by Mindy, Sarah agrees to pitch in with flower arrangements and pick up her friend’s disagreeable estranged mother at the airport (Rosanna Arquette, who magnificently telegraphs everything you have to know about her woman of privilege by the testy way she complains about being forced to fly coach).

After being introduced to Mindy’s warm and nurturing future mother-in-law as she lovingly makes her famous sweet potato casserole for a rehearsal dinner, it is possible to surmise that she is looking for a family as much she is a husband. But at her pre-ceremony bachelorette party, Mindy seems more intent on drinking, dancing and making out in public with Sarah at a bar than she is in looking forward to what her future holds. When Mindy has a last-minute panic attack the next day, she takes off into the woods with Sarah—formal wear be damned—and an air-clearing of sorts as well as an admission of mutual devotion takes place. The image of Keough’s beaming face says everything we need to know before credits roll.

Some might accuse “Lovesong” of being slight while others will applaud its minimalism. But there is no disputing that Kim has wisely provided her two stars—both of whom she has worked with before—with enough breathing room to bring her movie to life. While both actresses have been lured by big-budget blockbusters in the past—Keough as breeder Capable in “Mad Max: Fury Road” and Malone as tribute Johanna Mason in “The Hunger Games” franchise—let’s hope they continue to choose to do these sorts of challenging roles in smaller efforts that provide the type of big-screen showcases they deserve. 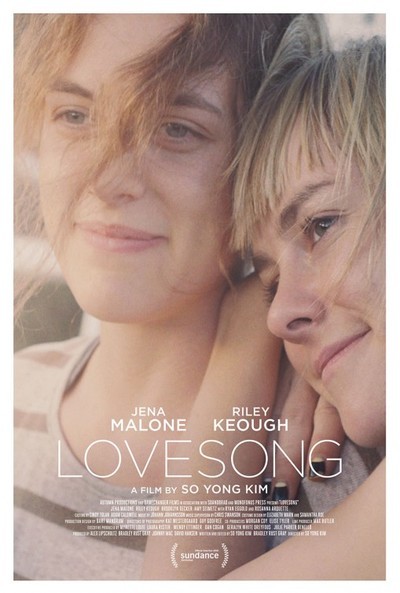