Winslet, Ledger: Who's supporting whom? 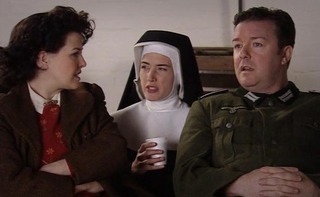 There are two main reasons I don't do Oscar predictions: 1) I'm bad at it; and 2) the Oscars take place in a corner of the cinematic universe that's only tangentially related to the movies I love. The Oscar ceremonies have been called the Gay Super Bowl and that's as good a characterization as any -- or at least it was, until "Crash" won.

But some peculiarities at the Golden Globules got me to wondering about the Academy rules. Although I remembered that Peter Finch had won a posthumous Oscar for "Network" in 1976, I didn't know for certain if the rules permitted a posthumous nomination -- like, say, for Heath Ledger, who won a Globule for best supporting actor as the Joker in "The Dark Knight." Turns out, nothing in the Academy's Rule Six: Special Rules for the Acting Awards prohibits it.

Perhaps a more pertinent question would be: Is it really a supporting role? Kate Winslet got her hands on two Globules this year -- one for lead performance in "Revolutionary Road" and another for supporting performance in "The Reader." Some have suggested that the latter is a little like considering Faye Dunaway's role in "Chinatown" a supporting one, but I figured the Hollywood Foreign Press Association just wanted to award Winslet a pair of Globulettes for reasons known best to themselves, so they went out of their way to nominate her in separate categories.

UPDATE: Indeed, Oscar voters have nominated Winslet's "Reader" performance in the lead category. She did not receive a nomination for "Revolutionary Road" -- even though she may well have received enough votes to qualify for both. At least, I think that's what this rule says:

5. In the event that two achievements by an actor or actress receive sufficient votes to be nominated in the same category, only one shall be nominated using the preferential tabulation process and such other allied procedures as may be necessary to achieve that result.

We had a similar discussion last year about the three main characters in "No Country for Old Men," played by Tommy Lee Jones, Josh Brolin and Javier Bardem. They were almost never on the screen at the same time, and various groups honored them as lead actors or supporting actors, however they saw fit.

For the record, the Academy's rules let the nominating voters (the members of the acting branch) decide:

3. A performance by an actor or actress in any role shall be eligible for nomination either for the leading role or supporting role categories. If, however, all the dialogue has been dubbed by another actor, the performance shall not be eligible for award consideration. Singing that is dubbed will not affect the performer's eligibility unless it constitutes the entire performance. The determination as to whether a role is a leading or supporting role shall be made individually by members of the branch at the time of balloting.

4. The leading role and supporting role categories will be tabulated simultaneously. If any performance should receive votes in both categories, the achievement shall be only placed on the ballot in that category in which, during the tabulation process, it first receives the required number of votes to be nominated. In the event that the performance receives the numbers of votes required to be nominated in both categories simultaneously, the achievement shall be placed only on the ballot in that category in which it receives the greater percentage of the total votes.

However, the Academy does not allow two performances by the same actor to compete within a single category. So Jason Statham cannot be nominated for best actor in "The Bank Job" and "Transporter 3."

UPDATE: Edward Copeland adds: "The most recent posthumous acting nomination was Massimo Troisi in 1995 for "The Postman (Il Postino)." Conrad Hall won cinematography posthumously for "Road To Perdition" in 2002 (Stop me before I spew Oscar trivia again :-)"

From "Extras" -- Oscar stuff begins about three minutes in: