A serviceable B-grade British heist movie, “The Bank Job” is no worse than its generic title. And no better. It front-loads the naughty sex and back-loads the plot twists (the titular crime takes place in the middle), but apart from the prominence of Princess Margaret in the subterfuge, it’s a pretty routine job, as the use of the hackneyed phrase “plot twists” earlier in this sentence should indicate.

“The Bank Job” begins with a quick time-shuffle of the sort to which modern audiences have become accustomed. It starts in 1970 in the Caribbean. Literally in it. Brief shots of sub-aquatic toplessness are followed by a quick-and-blurry tropical fornication montage and a little retro-voyeuristic shutterbugging. Next, it’s East London in 1971 and some hoods are making violent threats against a stubbly car shop dealer named Terry Leather (Jason Statham). Then it’s three weeks earlier and ...

You know the drill. At first you think Guy Ritchie might be rolling in his grave — only he’s not dead, just his career. That’s the kind of cheap shot you have plenty of time to think about as this movie grinds through its laboriously disjointed exposition.

It doesn’t stick to that approach for long, though. Once the picture gets its chronology sorted out (why did it employ flashbacks to begin with?), it eventually works up some downhill momentum near the end. But for a movie about royal scandals, spies, cops, villains (slang for crooks and thugs), prostitutes, pornographers, strip clubs, payoffs, radical-chic black-power celebrity gangsters, murder, torture, blackmail, double-crossings, extramarital temptations... you’d sure think “The Bank Job” would be more fun to watch. Instead, it seems a little distracted, continually glancing back over its shoulder at a few hundred other caper films and crime thrillers. Once it triggers memories of movies as diverse as "The Asphalt Jungle," “Rififi,” "Le Cercle Rouge," “The Italian Job,” “Reservoir Dogs,” “Ocean’s Eleven,” “Inside Man” — and how could it not? — you may realize that you’re not having quite as much fun watching this picture as you did watching those.

One semi-redeeming element is that the film was inspired by true events. The shocking 1971 Lloyds Bank robbery was a big story, until four days later when it suddenly wasn’t. The whole thing abruptly and mysteriously vanished from the papers, radio and television, reportedly due to a “D-Notice” issued by the highest authorities banning all press coverage.

But why? Did an opportunistic pseudo-radical black-power fascist who called himself Michael X really hide scandalous photographs of Princess Margaret in a London vault and then use the threat of exposure to blackmail the British government? Did Her Majesty’s Secret Service (“Spooks — MI5 or MI6, I can’t tell the difference,” a cop says) really engineer a bank robbery using small-time hoods to break into Pandora’s safety deposit box and retrieve the damning evidence before it escaped into the public domain?

Those are the premises of the script by Dick Clement and Ian La Frenais (“Across the Universe,” “Flushed Away”). But how much is truth and how much is inspiration? Nobody quite knows. A recent article about the infamous “Walkie-Talkie Bank Job” on the Web site of the British tabloid The Daily Mail (Feb. 16, 2008) reports:

“Speculation quickly arose that compromising sexual photographs of the queen’s sister, the late Princess Margaret, had been uncovered in the bank vault.

"It was rumoured they had been stashed away by well-known underworld figure Michael X. A drug dealer and Black Power leader, he was convicted of murder and hanged in Trinidad in 1975. A government file on him will remain closed until 2054. The Mirror can for the first time reveal that Fleet Street editors of the day were approached directly by senior government officials and told to drop the story.”

And it’s such a good story. What a shame it isn’t more memorably told. The director is the bewilderingly uneven Roger Donaldson (“Smash Palace,” “No Way Out,” “Cadillac Man,” “Cocktail”). The cast are fine (as British grammar would have it). Sorry there isn’t more to report.

Jim Emerson is the editor of www.rogerebert.com. 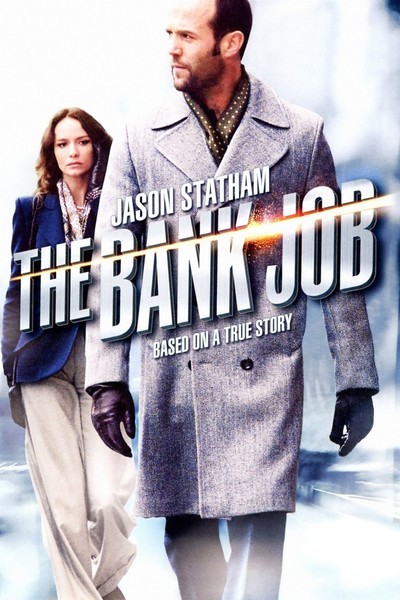