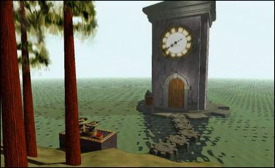 At last week's Conference on World Affairs, I was on a panel somewhat facetiously titled "An Epic Debate: Are Video Games an Art Form?" with Roger Ebert (whose answer to the titular question is, as you probably know, "no"). Sun-Times tech columnist Andy Ihnatko was supposed to join us, but at the last minute he couldn't make it. Fortunately, we were able to recruit author, brain expert and laparoscopic surgeon Leonard Shlain to join us.

Since the panel ended Thursday afternoon (April 13), I've seen a couple accounts of it on the web, including a speculation on the gamer blog Kotaku that predicted the whole thing was bound to be "a sham" because I was the editor of RogerEbert.com:

[H]e’s not just a film critc, no even that might offer too much possible contention for Ebert. No Emerson is also the the founding editor-in-chief of RogerEbert.com.

Wow, that must have been one heck of a debate. Ebert and his biggest fan. I’m sure a lot of interesting ideas were discussed, like how AMAZING Ebert is and how he is also so SUPER COOL.

Hey, I am a big "fan" of Ebert's, otherwise this job wouldn't interest me. Trust me, I wouldn't want to be the editor of michaelmedved.com or geneshalit.com. But, as actual readers of this site know, Roger and I don't always see eye-to-eye ("Million Dollar Baby," "Crash," "Fight Club," "Mississippi Burning," "Natural Born Killers" and so on) -- any more than any other two people on the face of the planet do.

Going in to the video game panel, I'd been hoping the audience (mostly students) would be fired up about the subject and challenge the panelists, but they were unfortunately pretty passive. Maybe they were intimidated by the rather formal (for Boulder) theater setting, I don't know. Ebert began by explaining why he felt a game (particularly the shoot-shoot, point-scoring kind) was not an experience equivalent to that of reading a great novel like, say, "The Great Gatsby," because games don't delve very deeply into what it means to be human.

Shlain countered that his son-in-law Ken Goldberg, an Internet engineer and artist, had created some interactive, multi-user web experiences (like one installation involving a robotic Ouija board that was selected for the 2000 Whitney Biennial) that were quite game-like and also considered "art" -- by one of the top art museums in America, at that.

Schlain also spoke about the less artistic pastime of repetitive game play and its effects in the brain. When you are first learning a game (or just about any task, from driving a car to playing the piano), many areas of the brain show electrical activity. But as you learn the "rules," the task becomes more autonomic and after becoming accustomed to the task, the brain shows stimulation only in one small area. That, he said, is how you can drive a car while listening to music or talking to a passenger without even being aware that you are driving.

For my bit, I began by reading a few selections from e-mails sent in by readers of RogerEbert.com on several sides of the issue, asking such questions as:

Why does a game have to be legitimized by calling it "art"?

Who can deny the artistry (graphical, musical, animation, narrative) that goes into making a video game? Surely these people are artists every bit as much as animators, composers and storytellers in film and literature.

If the game is simply a matter of hand-eye coordination or simple puzzle-solving, then is it art? Is a crossword puzzle art? Is chess art? Checkers? Ping-pong? Are athletic games art?

My feeling was (and is) that the panel's title question itself was kind of silly and oversimplified. It's the same as asking "Are movies art?" or "Are books art?" Of course, it depends on the individual movie or book. Are we talking "The Benchwarmers" or "2001: A Space Odyssey"? "The Bridges of Madison County" or "Emma"? Pac Man or Shadow of the Colossus?

Although I haven't played many shoot 'em up video games (I find them as dull as rote gunfights and car chases in movies), I have played open-ended narrative games such as Myst, which I consider to be an immersive experience that creates an artistic world in which the player is encouraged to explore. I compared it to entering and getting lost inside a David Lynch movie (think "Twin Peaks" or "Blue Velvet" or "Mulholland Drive" or "Lost Highway"). It's a mystery, and like any mystery it draws you in and you try to make sense of what you discover. That's just what we do, as pattern-seeking animals, and it's an essential aspect of how we respond to art. (I'd say The 7th Guest and The Residents' Bad Day on the Midway, both of which I've also played, fall into this category as well.)

Our curiosity is stimulated when we encounter pieces of information of any kind, and we invariably try to connect the dots and put them together into some kind of meaningful gestalt. It's at the root of everything we do -- from learning how to do new things, to creating art, to conspiracy theories, to positing the existence of a Creator. (Art and religion are very closely related in the brain.)

(Ebert said he'd also been intrigued by Myst, but that he'd wished it had just played itself like a movie rather than as a game where the user was called upon to unlock parts of the riddle in order to move on to the next level of the game.)

On the other hand, I've also watched friends play more simplistic, stimulus-response games such as Doom and, as a critic, that's where I draw the line. Sure, a lot of artistry and technical know-how goes into the creation of the game, but the experience of playing it is purely mechanical. Any emotional involvement is purely visceral and reactionary. There are movies like that, too (many of them directed by Alan Parker or Michael Bay) that do nothing but provoke knee-jerk spasms in the viewer, and I don't consider them "art," either.

Of course, there's so-called "highbrow art" and "lowbrow art" -- or elitist art and popular art, or formal and informal art -- in all media. You might put Bartok's string quartets and Shakespeare's "King Lear" and the films of Carl Theodor Dreyer in one camp and The Beatles' "Revolver" and Joseph Heller's "Catch-22" and the cartoons of Chuck Jones in the other. Or maybe not. Right now, games are generally considered to be popular entertainments rather than works with artistic ambitions. But, for what it's worth, we should probably remember that much of what we now call "classical" music -- like, say, Mozart -- was, in fact, the pop music of its time.

For many years I have had a rubber stamp that reads: "This is not art." I think it's hilarious, and I thoroughly enjoy stamping it on things, particularly when I can use it ironically. Video games are not just a new style (like abstract expressionism in painting, or Warhol's Campbell's soup cans, or Duchamp's Dada urinal -- all of which were not accepted as art by many). They are a new form, a new medium entirely. Movies are more than 100 years old; video games are still in their adolescence.

Some in the audience at the Flatirons Theater in Boulder seemed to feel that, even if games hadn't reached an artistic zenith yet, the medium holds promise, in the hands of sufficiently ambitious artists. Now, the bulk of games are just commercial product -- as are most movies and books in the marketplace. That's not to say that even some of these lesser games are not entertaining or involving, but they're not shooting for anything more than a quick buck. Some say the best Japanese game designers are already doing work that is light years beyond what American gamers are familiar with.

During the Q&A (and at the CWA, most of the 90-minute panels are spent in discussion with the audience; they are not formal "debates" by any stretch), some seemed to feel the validity of their gaming experience was being denied if it couldn't be called "art" -- and that was an unfortunate misunderstanding.

I look at it this way: Gamers are on the cutting edge of a new form of expression. I think a game like Myst qualifies as art, but any artwork can only be apprehended and evaluated one work at a time. So, even if games haven't achieved the highest levels of artistic expression yet, it's not up to them to conform to anyone's idea of what art is. They have the potential to expand the boundaries of what we consider art to be.

P.S. If you really want to hear this whole panel discussion -- or any of the others -- you can order them on CD for five bucks apiece from Tapes Again, a local company in Boulder.