“Emma” is the fourth recent version of an Austen novel, after “Persuasion,” “Sense and Sensibility” and the TV adaptation of “Pride and Prejudice.” (As a bonus, the Beverly Hills comedy “Clueless” was based on the same story.) It is not about very much--about the romantic intrigues of a small group of people who will all more or less have to marry one another sooner or later, if they haven't already.

Either you are in sympathy with this material or you are not. I had to smile at an undergraduate's review of the movie, posted on the Internet, which complains that “a parade of 15 or 20 or 8 billion supporting characters waltzes through the scenes. Each is called Mister or Miss or Mrs. Something, and each of them looks and acts exactly the same (obnoxious).” I am not sure you can look obnoxious, but never mind. It may be that young people in a permissive age do not have sympathy for a movie in which a busybody matchmaker spends her days trying to pair off unwilling candidates for matrimony. Yet in its high spirits and wicked good humor, “Emma” is a delightful film--second only to “Persuasion” among the modern Austen movies, and funnier, if not so insightful.

Gwyneth Paltrow sparkles in the title role, as young Miss Woodhouse, who wants to play God in her own little patch of England. You can see her eyes working the room, speculating on whose lives she can improve. She takes as a project Harriet Smith (Toni Collette), a respectable young woman of imperfect pedigree, insisting that she marry the Rev. Elton (Alan Cumming). Miss Smith would much sooner marry a local farmer, but Emma won't hear of it. When the poor farmer sends Miss Smith a letter of proposal, she shows it to Emma, who sniffs, “It is a good letter. One of his sisters must have helped him.” Miss Smith is so uncertain of herself that she turns down the farmer, only to discover that the Reverend doesn't love her--he loves Miss Woodhouse (“I have never cared for Miss Smith,” he tells Emma, “except as your friend”). This should be a lesson for Emma, but she'll need more than one.

Stories like this are about manners, nuance and the way that one's natural character tugs against the strict laws of society. In a time when most people traveled little and diversion was largely limited to local parties, three-volume novels and church services, gossip was the great pastime. Local characters were prized because they gave you someone to talk about, and “Emma” has its share, most delightfully Mrs. Elton (Juliet Stevenson), who praises herself incessantly by quoting others (of her musical talent, she says, “I myself don't call it great. I only know that my friends call it so”).

Other local color is provided by Miss Bates and her deaf mother, Mrs. Bates. (They are played by Sophie Thompson and Phyllida Law, who are Emma Thompson's sister and mother.) Miss Bates says everything three times and Mrs. Bates never hears it, and when Emma is unforgivably rude to poor Miss Bates it is the upright Mr. Knightley (Jeremy Northam), her brother-in-law, who dresses her down, giving her a stern lecture on her responsibilities under the class system.

Emma thinks of Knightley as a brother. She is interested in the Reverend not at all. There is a dashing young bachelor in the neighborhood named Frank Churchill (Ewan McGregor) who seems cast as her beau (he rescues her when her carriage gets mired in the river, and again when she is threatened by gypsies). But he has other plans, too, and in the fullness of time Austen sees that everyone gets what they deserve, or in Emma's case perhaps rather more. 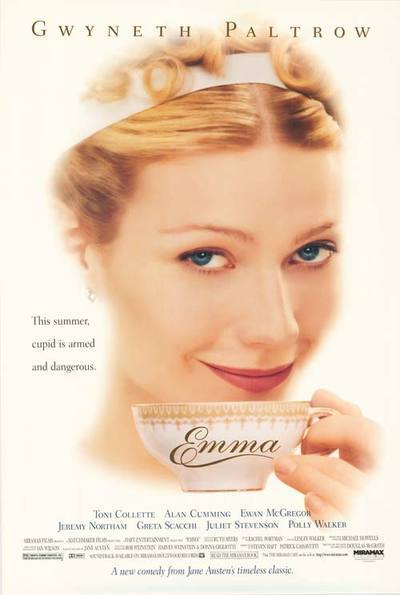