TIFF: Matters of Life and Death 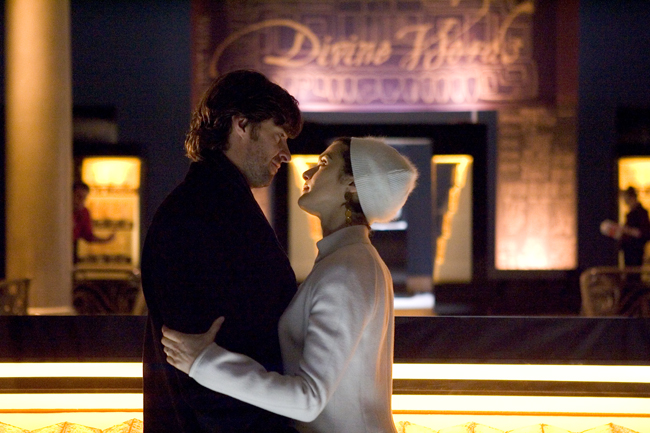 Three tales in "The Fountain": Hugh Jackman and Rachel Weisz.

There's nothing tepid about Darren Aronofsky, and I love him for it. "The Fountain," his grand mythical fantasy that interweaves three tales about the fear of death and the quest for eternal life, is a terrifically ambitious spectacle that Aronofsky commits to completely. I have no idea how critics and audiences are going to receive it (I never do), but it's exhilarating to see somebody go this far out on a limb for his vision.

Hugh Jackman and Rachel Weisz appear as versions of the same characters in all three narratives. Dr. Tommy Creo is research doctor studying brain tumors while his wife Izzy (or "Iz," as in "is") is dying of one; as Spanish conquistador Tomas Creo, serving Queen Isabella during the 16th century terror of the Inquisition, who is sent on a quest for the Tree of Life in a story called "The Fountain," written by Izzy; and as some kind of monk/space traveller hurling toward a nebula with the ancient tree in what looks like an interstellar snowglobe, haunted by the ghost of Izzy.

It could have been as silly as (again) "Lady in the Water," if Aronofsky had suffered the same kind of failure of nerve that afflicted M. Night Shyamalan. But never fear. As you might expect from the director of "Pi" and "Requiem for a Dream," Aranofsky goes all-out and damn those who don't want to keep up with him. You can feel the filmmaker's passionate commitment to every moment in the movie. This guy knows what he's doing, and he's trying to put it across, and he'll do absolutely whatever it takes. Maybe even more.

In its delirious momentum, "The Fountain" reminds me not only of Aronofsky's previous films, but of the Ken Russell of "Altered States" or the John Boorman of "Excalibur." Because he's not afraid to go "out there," and to risk looking ridiculous by grappling with gigantic philosophical concepts, the movie works. There are a few rough spots, but the energy doesn't flag and it carries you along. And, in the bargain, "The Fountain" serves up some resonant mythological imagery you won't soon forget.

It begins, and ends, with the simple idea of a tree over a grave -- an image that (to me) perfectly encapsulates the yin-yang nature of life and death. I won't say anything more about it for now, except that Hugh Jackman's career should be reborn; and Brad Pitt was a fool to abandon this film -- especially for "Troy."