“Altered States” is one hell of a movie -- literally. It hurls its characters headlong back through billions of years to the moment of creation and finds nothing there except an anguished scream of "No!" as the life force protests its moment of birth. And then, through the power of the human ego to insist on its own will even in the face of the implacable indifference of the universe, it turns "No!" into "Yes!" and ends with the basic scene in all drama, the man and the woman falling into each other's arms.

But hold on just a second here: I'm beginning to sound like the movie's characters, a band of overwrought pseudo-intellectuals who talk like a cross between Werner Er-hard, Freud, and Tarzan. Some of the movie's best dialogue passages are deliberately staged with everybody talking at once: It doesn't matter what they're saying, only that they're incredibly serious about it. I can tell myself intellectually that this movie is a fiendishly constructed visual and verbal roller coaster, a movie deliberately intended to overwhelm its audiences with sensual excess. I know all that, and yet I was overwhelmed, I was caught up in its headlong energy.

Is that a worthy accomplishment for a movie? Yes, I suppose it is, if the movie earns it by working as hard as “Altered States” does. This is, at last, the movie that Ken Russell was born to direct the same Ken Russell whose wretched excesses in the past include “The Music Lovers,” “The Devils,” and “Lisztomania.” The formula is now clear. Take Russell's flair for visual pyrotechnics and apocalyptic sexuality, and channel it through just enough scientific mumbo jumbo to give it form. The result may be totally meaningless, but while you're watching it you are not concerned.

The movie is based on a Paddy Chayevsky novel, which was, in turn, inspired by the experiments of Dr. John Lilly, the man who placed his human subjects in total immersion tanks floating them in total darkness so that their minds, cut off from all external reality, could play along the frontiers of sanity. In “Altered States,” William Hurt plays a Harvard scientist named Jessup who takes such an experiment one step further, by ingesting a drug made from the sacred hallucinatory mushrooms of a primitive tribe. The strange thing about these mushrooms, Hurt observes in an easily missed line of dialogue in the movie, is that they give everyone who takes them the same hallucinatory vision. Perhaps it is our cellular memory of creation: There is chaos, and then a ball of light, and then the light turns into a crack, and the crack opens onto Nothing, and that is all there was and all there will be, except for life, which has its only existence in the mind.

Got that? It hardly matters. It is a breathtaking concept, but “Altered States” hardly slows down for it. This is the damnedest movie to categorize. Just when it begins to sound like a 1960s psychedelic fantasy, a head trip, it turns into a farce. The scientist immerses himself in his tank for too long, he regresses to a simian state, physically turns into some kind of ape, attacks the campus security guards, is chased by a pack of wild dogs into the local zoo, and kills and eats a sheep for his supper before turning back into the kindly Professor Jessup, the Intellectual Hulk.

The movie splits up into three basic ingredients: The science, the special effects, and the love relationship between the professor and his wife. The science is handled deliciously well. We learn as much as we need to (that is, next to nothing) about total immersion, genetics, and the racial memory. Then come the special effects, in four long passages and a few short bursts. They're good. They may remind you at times of the sound-and-light extravaganza toward the end of 2001, but they are also supposed to evoke the birth of the universe in a pulsating celestial ovum. In the center of this vision is Dr. Jessup, his body pulsing in and out of an ape shape, his mouth pulled into an anguished "O" as he protests the hell of being born. These scenes are reinforced by the music and are obviously intended to fuel the chemically altered consciousness of the next generation of movie cultists.

But then there is the matter of the love relationship between the professor and his wife (Blair Brown), and it is here that we discover how powerful the attraction of love really is. During the professor's last experiment, when he is disappearing into a violent whirlpool of light and screams on the laboratory floor, it is his wife who wades into the celestial mists, gets up to her knees in eternity, reaches in, and pulls him out. And this is despite the fact that he has filed for divorce. The last scene is a killer, with the professor turning into the protoplasm of life itself, and his wife turning into a glowing shell of rock-like flesh, with her inner fires glowing through the crevices (the effect is something like an overheated Spiderman). They're going through the unspeakable hell of reliving the First Moment, and yet as the professor, as Man, bangs on the walls and crawls toward her, and she reaches out, and the universe rocks, the Man within him bursts out of the ape-protoplasm, and the Woman within her explodes back into flesh, and they collapse into each other's arms, and all the scene really needs at that point is for him to ask, "Was it as good for you as it was for me?"

“Altered States” is a superbly silly movie, a magnificent entertainment, and a clever and brilliant machine for making us feel awe, fear, and humor. That is enough. It's pure movie and very little meaning. Did I like it? Yeah, I guess I did, but I wouldn't advise trying to think about it very deeply. 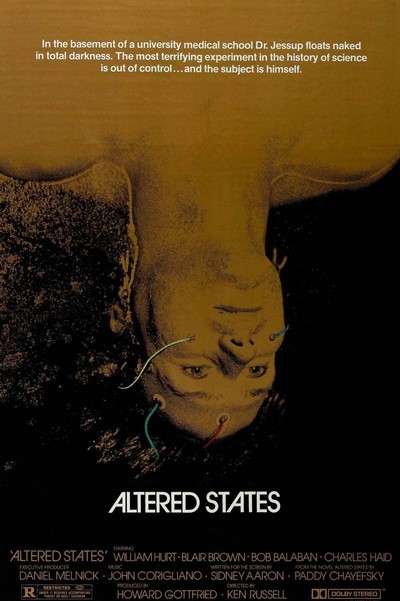