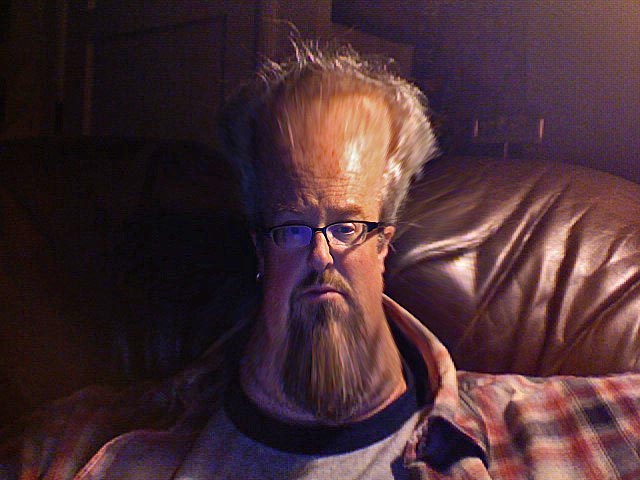 Me with post-festival headcold, after just getting back home and sinking into the comfort of my den-like Man Chair. (all photos by Jim Emerson, except as noted)

My taxi driver to the airport yesterday (he was Ethiopian, but had lived in Toronto for 18 years) asked me if I'd seen any "movie stars" at the film festival. I had to admit I hadn't -- although I've encountered people I consider to be movie stars on the street in past years: Luis Guzman, Liev Schreiber, Brian de Palma, Sarah Polley, Stephen Rea, Jean-Pierre and Luc Dardenne... 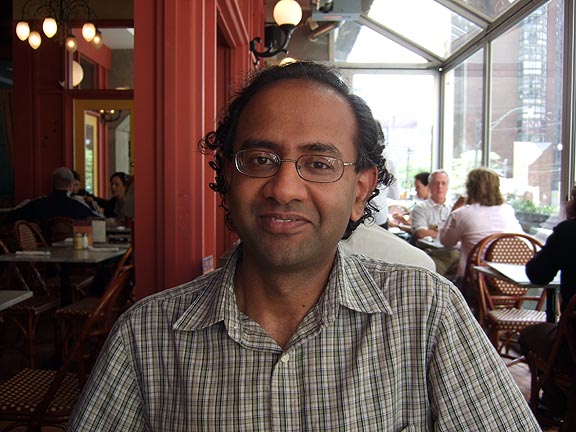 The ubiquitous (and deservedly so) Girish. A man with cinecurean tastes. (That's a neologism of my own invention that is related to "epicure" and has nothing to do with "sinecure," I don't think.)

Toronto, at least at festival time, is a celebrity-mad city like no place I've ever seen. Celebrities make the front pages of the newspapers just because they're celebrities and they're in Toronto. Rogers cable used to have a non-stop TIFF schedule of celebrity gossip, celebrity interviews, off-the-cuff "reviews," and celebrity press conferences. I don't know if they did that this year, because I never turned on the television in my hotel room. (Meanwhile, TiVo was covering other necessities for me at home.) 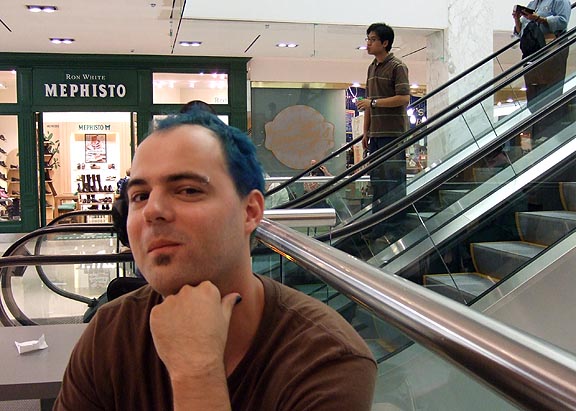 Andy Horbal plays Mephisto at the foot of the Stairway to Heaven (the escalator to the Varsity Cinemas). 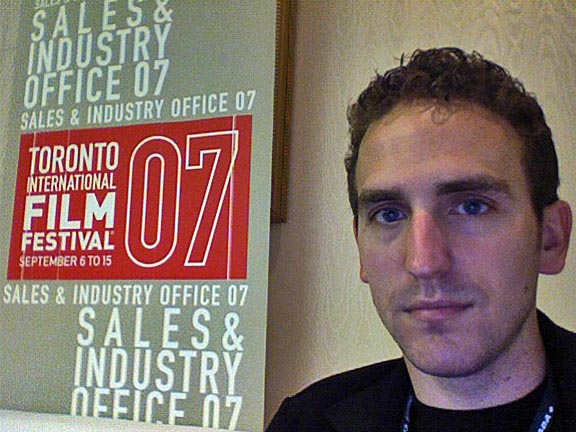 The House Next Door's Keith Uhlich took this shot of himself with his MacBook, outside the press office at the Delta Chelsea.

Some journalists and critics were doing celebrity interviews in addition to going to movies, with stars like George A. Romero (whose girlfriend was the bartender at my hotel!) or Jodie Foster or Brian De Palma or Bela Tarr -- in gang-bang roundtables or 15-30-minute individual sessions. The people I was most excited about getting to meet were my fellow movie bloggers. I had lunch with Girish Shambu between screenings in Toronto last year, and it was a pleasure to see him again, particularly since he enjoyed the oblique, androgynous eroticism of the luminous Eric Rohmer movie as much as I did. His highest recommendation was for Barcelona-born director Jose Luis Guerin's "Dans la ville de Sylvia" -- which, unfortunately, I missed. We also thought Lee Chang-dong's "Secret Sunshine" was among the very best things we'd seen. 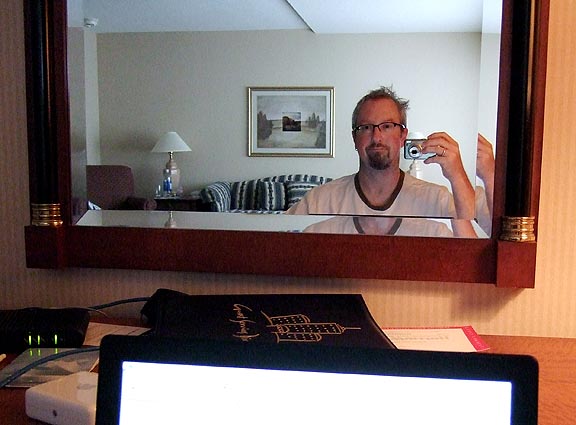 Keith Uhlich, editor of "The House Next Door," organized a mid-fest critics' roundtable podcast, 'round a tiny round table in Nathan Lee's hotel room with Nathan (whose byline should be familiar from the Village Voice, Film Comment, The New York Times), Torontonian eyeWeekly critic Adam Nayman, Keith, and me. It was too much fun -- we ran out of time long before we ran out of stuff we wanted to talk about. Of course, that was the morning I forgot to bring my camera. Too bad, because if you saw Nathan's new-mown haircut, you'd want to rub his head. It's that cool. (I'll post a link to the podcast when it's available, if you want to hear us go on about the trials of film critics filing reports and interviews from festivals, our indelible images from TIFF, Brian De Palma, Bob Dylan, Todd Haynes, semiotics [not much!], and I forget what else.) 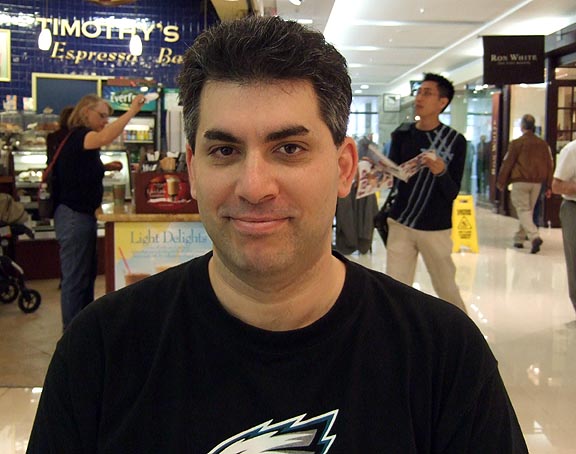 I also got to meet up with Christopher Long, a frequent and valued contributor to Scanners comments, and reviewer for DVDTown and other sites. Chris claims to loathe Paul Haggis's "Crash" (and Sam Mendes's "American Beauty" -- two peas in a pod) even more than me. I don't know if that's possible, but I found him convincing. They both do the same morally corrupt thing, anyway: taking grotesque clichés and then flipping them around so that that they are... even more insulting clichés. All in the name of "enlightenment." We had a nice talk about our mutual admiration for Divine, too. Don't recall how that one came up.

I'm delighted to have more faces to put with the words I've appreciated from these folks for so long. 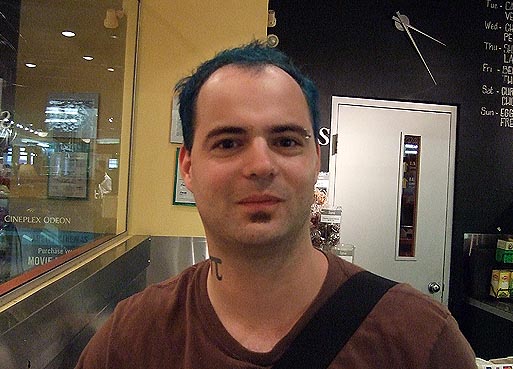 Another shot of Andy, so you can see the π tattoo on his neck. I have eight tattoos, which to me are like a living map of who and where I've been. The oldest of them is about 15 years, and I've never regretted any of them for even a second -- though I might like to retouch a couple... 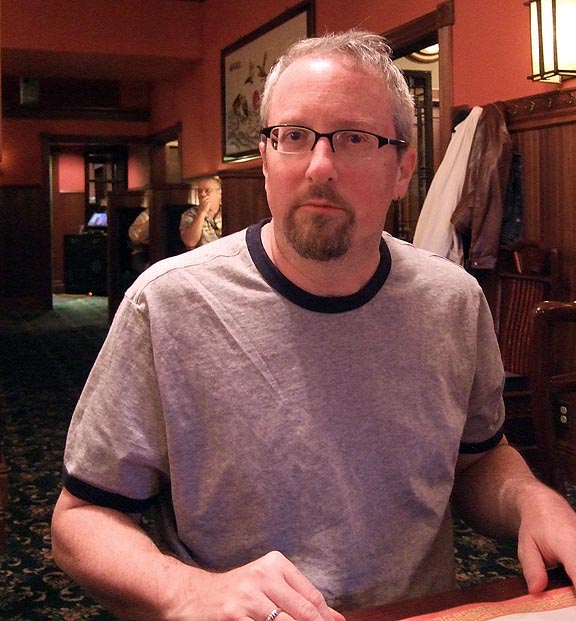 OK, I gotta get going if I'm gonna make it to the next screening... (photo by Tess Lemon)