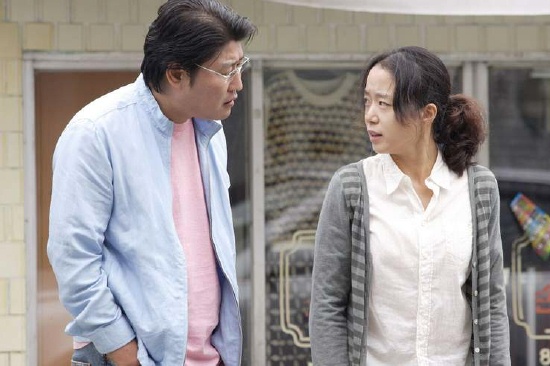 Lee Chang-dong's "Miryang" ("Secret Sunshine") begins with a CinemaScope view of a wide-open landscape beneath a big blue sky, and ends looking into the dirt of a tiny urban courtyard, in a corner with cement bricks, a discarded plastic bottle, a rubber hose, congealed muck and mud. How it makes that trajectory I am not going to say -- although, if you were unfortunate enough to read the Toronto Film Festival catalog entry about the film (say, with an eye toward making a decision about whether to see it), you'll find the film's single most shocking plot development revealed at the beginning of the third paragraph.

This is criminally unfair to the audience, and another reason why, as I wrote recently, I like to know as little as possible about films before I see them, and engage in my due-diligence research afterwards. You don't realize how much a film can be ruined even by seeing a few images in a trailer (or production stills) in advance. It's terrible. Somewhere in your memory, you keep waiting for the images or moments to appear in the film, and too often the stuff the distributor has chosen for public release is designed to sell the picture but not to serve the audience's appreciation or experience of it once they've bought a ticket.

"Secret Sunshine" is the meaning of the name of the South Korean town Miryang, to which Lee Shin-ae (Jeon Do-yeon, best actress at Cannes for this harrowing performance) and her son Jun are relocating in the first shot of the movie. That's all the story detail you're going to get from me. Like the first image (which suggests a road behind them that we only learn something about later), the final one indicates that the film is over, but that something continues. (It may also strike you as a miniaturized/essentialized recapitulation of a stunning shot of a lake from somewhere in the middle of the movie.)

The film is brave and unsparing (as is Jeon's performance) and asks some challenging and disquieting questions, among them whether human values such as love, mercy, morality, meaning and forgiveness still have meaning if we shift the ultimate responsibility for them away from human beings onto some (Christian, in this case) concept of God. What is the significance of these principles if they're viewed not in human terms but as supernatural absolutes? "Secret Sunshine" is film about hope and despair, about the stages of grief and several of the "Deadly Sins" (pride, most of all), and just how much a person can withstand (think Job) and still hang on to life, to meaning, to sanity.

It's a hard film to write about without using superlatives.