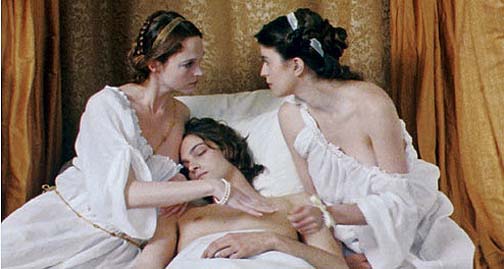 People. They can be quite beautiful.

"Love comes in at the eye." -- William Butler Yeats -- and David Cronenberg ("Videodrome")

Eric Rohmer has made a career out of chronicling the rituals of romance (and Romanticism), from the 6th century to the present, and from his celebrated film series, Six Moral Tales (1963 - 1972), Comedies and Proverbs (1981 - 1986), and Tales of the Four Seasons (1990 - 1998). And then there are those elegantly contrived period pictures that don't fit into the series, like "Perceval," "The Marquise of O," "The Lady and the Duke" (which I haven't seen) and now "Les Amours d'Astrée et de Céladon" (known in English-speaking Canada as "The Romance of Astrea and Celadon").

Two of my favorite Rohmer films (perhaps my two very favorites) seem to be among his least-mentioned: "Perceval" and "Summer" (aka "Le Rayon vert") -- the former completely artificial (shot on a painted soundstage) and the latter an equally charming portrait of a romantic klutz.

"Les Amours d'Astrée et de Céladon" is a Rohmerian delight, another ritualized romance (highly mannered behavior, poetic language) played out in a naturalistic pastoral setting (an unblemished slice of French countryside around the River Lignon). It's all an elaborate game of appearances, deceptions, seductions and betrayals -- about what is seen or not seen, what is said or not said, and how love comes in at the eye, but is sealed with the mouth. The characters -- high-born and common-folk; shepherds, shepherdesses, nymphs and druids -- intermingle in a realm of symbols and prophecies that is both fleshly and spiritual, earthy and philosophical. It's a moral tale, a comedy, a proverb, and a seasonal story (midsummer, I'd say) that toys enchantingly with the paradoxical nature of love, and the contradictory distinctions between the lover and the beloved.

I don't even want to try to describe the fantastical plot, but let it suffice to say that young lovers are separated by a misunderstanding, and they must cross the river that flows between them, and flirt with crossing sexual boundaries, in order to reunite as one. The teasing, seductive visual and narrative strategy (adapted from the 17th century novel "L'Astrée" by Honoré d'Urfé), is designed to teasingly delay gratification until it climaxes in a bedroom with three voluptuous women in loose white nightdresses sleeping in one fluffy feather-bed (two shepherdesses and one nymph), and a shepherd disguised as a druidess (but really the long-lost lover of one of the shepherdesses) across the room, alone, in another bed. The sexual tension is ripe and delicious... and as unbearably tantalizing for the audience as it is for the frustrated lover.

Rohmer loves to photograph the most beautiful creatures in the most luminous light, and at age 87 his eye and his sense of rhythm is faultless. Astrée (Stéphanie de Crayencour) is a fair and incandescent beauty, and the strikingly androgynous Céladon (model Andy Gillet) makes as lovely a druidess as he does a shepherd. Not really my type, but I wouldn't kick this Frog out of a Mistletoe Festival...