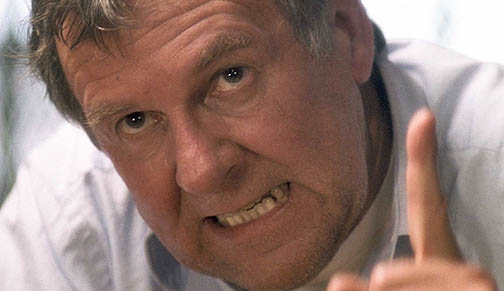 Tom Wilkinson has probably won an Oscar nomination for supporting actor in "Michael Clayton" before he ever appears on the screen. Or he should, anyway. But then, he should also be competing with (just to mention some of the other supporting male performances I've seen in Toronto thus far) the likes of Vince Vaughn, Hal Holbrook and especially Brian Dierker in "Into the Wild"; Tommy Lee Jones and Javier Bardem in "No Country for Old Men" (or are those leading actor performances?); Armin Mueller-Stahl and Jerzy Skolimowski (!) in "Eastern Promises"; and definitely Sydney Pollack in "Michael Clayton"...

Now, I am not one of those people who come to Toronto for Oscar-spotting purposes. But "Michael Clayton," written and directed by "Bourne" series screenwriter Tony Gilroy, is the kind of smart, crisp, "serious" mainstream entertainment that gives Hollywood (or the part of it influenced by George Clooney) a good name. I guess you could describe it as a Manhattan "legal thriller" -- most of the main characters are corporate lawyers -- that strikes a delicate tonal balance between the cynical political paranoia of the "Bourne" movies, the satirical paranoia of "Network," the corporate paranoia of "The Insider," and the legalistic paranoia of "Erin Brockovich." And, as in all these movies, when you're feeling paranoid, it doesn't mean somebody isn't out to get you.

Wilkinson finds that perfect chord, and establishes the tone of the movie, in his off-screen opening monologue, a breathless rant of a voice message left for his fellow attorney, the eponymous Michael Clayton (Clooney), the firm's "fixer" who is called in to take care of delicate "problems" for a rich and powerful clientele. Wilkinson's character, Arthur Edens, is a brilliant lawyer who's been working for more than a decade on a single case, involving a chemical manufacturer that, after the usual cost-benefit analysis, released an agricultural product with toxic effects on humans. (The company's earth-friendly TV spots will look painfully familiar to PBS viewers, where such underwriting entities are expert at peddling their green corporate citizenship.)

Arthur is also manic-depressive, and he's gone off his meds, and he's raving about the moment of clarity he's having about the dirty, soul-killing business he's in. He's like Peter Finch in "Network," only his volcanic monologues aren't quite so messianic. (But then, he's not working from a Paddy Chayevsky script, either. Actually, I think "Network" would have been a better movie if it had been written and directed more in the style of "Michael Clayton." That is, a bit more dryly.) 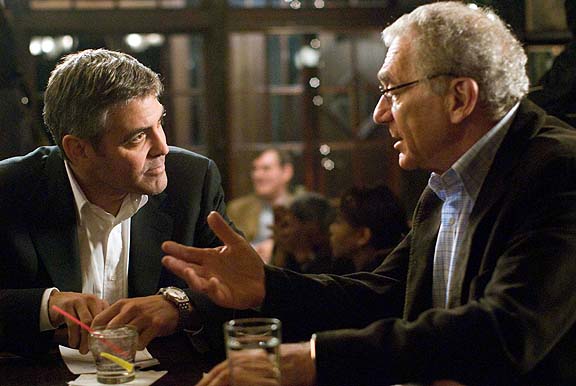 Clooney and Pollack: These guys are good. Really good.

The movie revolves around the title character's face, and its hard to think of another actor who could hold it together the way Clooney does. His eyes reveal a quicksilver intelligence -- always sizing up the situation, figuring out how best to play it, even when he's utterly lost -- that Clooney can do without looking like he's trying. He doesn't give things away, he just registers enough to for you to notice without noticing that you're noticing. And that's a considerable accomplishment (especially when you remember how broadly, goofily dumb he can also play with supreme confidence, as in the Coens' "O Brother, Where Art Thou?"). Equally adept, and really fun to watch, is Tilda Swinton as an ambitious corporate climber, who rehearses her every statement while nervously trying on the appropriate uniform for each boardroom crisis. (Look for Ken Howard and Miles O'Keefe in surprising roles as professional office politicians.)

And there's ever-reliable Sydney Pollack, who has become one of my favorite character actors ("Husbands and Wives," "Eyes Wide Shut," "The Sopranos"). The man is a consummate actor, so effortlessly natural he can make others look mannered next to him. That makes him the ideal foil for the comparably relaxed style of Clooney, and their scenes together are especially fun to watch. They also provide Wilkinson with something solid that he can bounce his wild, unpredictable serves off of. (I feel about Pollack the opposite of how I feel about Sean Penn: the former is a better actor than a director, and with the latter it's the other way around. Pollack is a producer on the film -- and Clooney, Steven Soderbergh and Anthony Minghella among the executive producers -- and I mean no slight when I say I found myself grateful that they decided to let, or enable, somebody else to direct this one.)

Gilroy does just fine in his directorial debut. His style suits his actors (and, for that matter, his leading characters): handsome, smart, economical. Three of the last four shots in the film (number three is simply a bridge between two and four) are quiet stunners, though I would have cut to black about two or three seconds earlier at the end. The first of these final shots sums up the virtues of the film ideally: While quite naturally following the trajectory of one character in the foreground, the fate of another is captured in the same frame, but out of focus and in the receding background. It's another perfect note, and it's handled so deftly you could almost miss it. You won't, though -- and the great thing is you'll feel like you discovered it yourself. Along with everybody else in the audience.