TIFF 08: The buzz and the poop 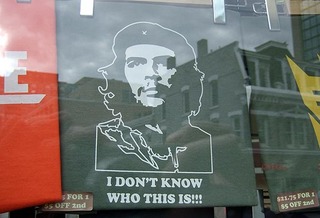 It's the question you dread, at least from total strangers, but it's unavoidable at a film festival -- kind of like "What's your major?" in college:

My dulled response while immersed in this cinematic maelstrom (my brain runneth over) is to say something like: "Yeah..." and then forget where the hell I am in time and space. But I like listening to other strangers trade views on what they've seen, whether I have a clue as to what they're talking about or not. (Yes, I like to eavesdrop: Film is a voyeur's medium.)

The other night at dinner, for example, some French (French Canadian? Belgian?) fellows were sitting behind us on a rooftop patio. A little mist was falling, but we were protected by table umbrellas. I turned just in time to hear one of them say, I a heavy accent, "Yes, but then the two protagonists..." I can't really tell you why I liked that so much, but I keep thinking (as I often do): "Oh, that would be so great to put in a movie!" I have loads and loads of fleeting images and snatches of conversation that need to be stuffed into some kind of Altmanesque tapestry someday.

Sometimes you wonder if the movies people are talking about are the ones you saw. Really, you can't tell. (And sometimes you wonder if the movies described in the catalog are the ones you saw.) Sometimes somebody hates something so much it makes you want to see it, or looooooves something so much (usually because it's "so beautiful" -- and you can tell they're either talking about its cinematography or its Pavlovian elicitation of pity) that it makes you want to stay as far away as possible. 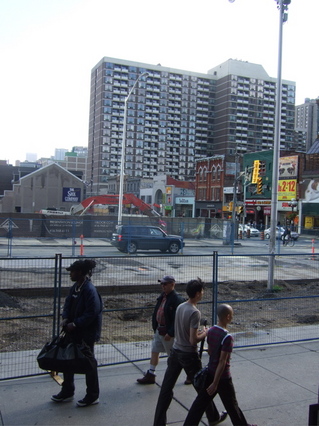 Quiz: What is missing from the picture at right? Dogs, that's what. Hot dogs! There used to be three 24-hour frankfurter-cart vendors on this stretch of sidewalk at Bloor and Yonge, over which I have rhapsodized in the past. Now they have been displaced for a construction project that will widen the sidewalk and add greenery. Which I'm sure will be nice. But now, except for the guy across the street from the ManuLife Center who's only open until 8 or 9 pm, that means no hot Italians, spicy Polish, etc., on Bloor this year.

Snatches of conversation, overheard in lines, lobbies and theater seats before the lights went down:

Caveat: I do not endorse any of the comments or opinions below except for the ones about the Coens' "Burn After Reading" because I haven't seen the other movies.

"I saw [garbled]. I was so disappointed. Unbelievably bad. Just pretentious garbage."

"I loved the Coen Brothers' movie, but I seem to be one of the few."

"I thought it was hilarious. I guess some people didn't like it because they thought it was too farcical or something. How can it be too farcical?!?! George Clooney was fantastic. He made himself totally unattractive -- just with his personality. And Brad Pitt -- hysterical! I don't care if he's good-looking, he's a serious actor!"

Between a white man and a woman of color:

"Passchendaele" was just a bad movie. I can live with that. But Spike Lee's movie ("Miracle at St. Anna") is the most racist film in the whole festival. A racist movie against black people! It has every bad platoon-movie cliche you can think of: The light-skinned guy who can't keep it in his pants, the dark-skinned guy who [garbled]... And every other word out of their mouths is 'nigger.' They constantly refer to each other as 'nigger.' "

"Didn't Spike Lee get mad at Quentin Tarantino and Samuel L. Jackson for the same thing in 'Jackie Brown'?"

"All this movie is about is saying: 'Look, Clint Eastwood, I can make a racist movie about black people!' "

"I went to a party last night. It was an OK party, but nothing great. I heard that after I left Martin Landau showed up."

"You know the ending [of "Burn After Reading"], where the guy says what they've learned? That was the best ending I've seen in a long time!"

NOTE: I took the photo at the top of this page last year, but this year Steven Soderbergh's 261-minute "Che" is screening, so it seemed a good time to resurrect it.