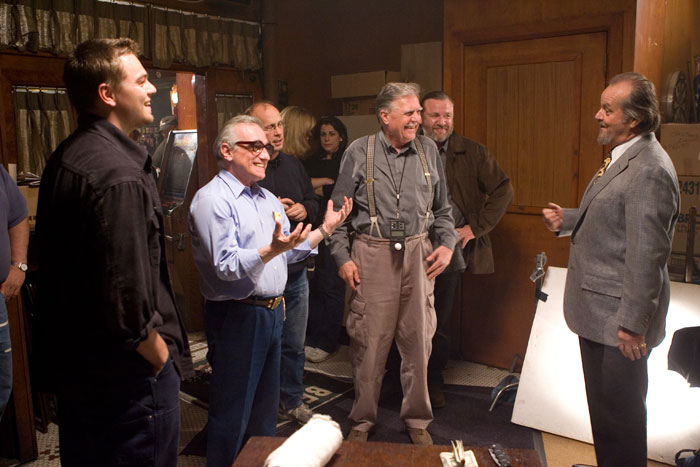 A number of times while watching Martin Scorsese's "The Departed" I was distracted by cuts that didn't match. I'm not one of those petty "gaffe squadders" who look for continuity errors -- but I was bugged by actors who shifted in space from shot to shot. Sharp-eyed David Bordwell is the first person I know of to have written about these lapses in traditional Hollywood standards of professionalism and craftsmanship -- and a lot more. Check out a series of related entries on From his blog:

Speaking of editing: It’s blasphemy, but I’ve been long convinced that Scorsese’s films aren’t particularly well-edited. Look at any conversation scene, particularly the OTS [over-the-shoulder] passages, and you’ll see blatant mismatches of position, eyeline, and gesture. Spoons, hands, and cigarettes jump around spasmodically. In "The Departed," Alec Baldwin somehow loses his beer can in a reverse shot, and in the swanky restaurant, it’s hard to determine if there are one or two of those towering chocolate desserts on the table.

This may seem picky, but craft competence is not for nothing. Current reliance on tightly framed faces tends to sacrifice any sense of the specifics of a place. In most scenes, actors are so overcloseupped that little space is left for geography, even the mundane layout of a police station. Choppy cutting also subtly jars our sense of a smooth performance. Why can’t our directors sustain a fixed two-shot of the principals and let the actors carry the scene -– not just with the lines they say but with the way they hold their bodies and move their hands and employ props? Scorsese, though always a heavy shot/reverse-shot user, held full shots to greater effect in earlier movies.

While others are applauding, Bordwell says this time he'll have to sit on his hands. He also presents an illuminating breakdown of shot lengths in Scorsese films here:

"The Departed" has calmed Scorsese’s urge to track a bit, but that’s balanced by its over 3200 cuts. The result is an average shot length (ASL) of about 2.7 seconds. Not unusual for an action picture nowadays, but consider where Scorsese started by conning these ASLs:

Like his contemporaries, Scorsese has succumbed to the fast-cut, hyper-close style that has made our movies so pictorially routine, however well-suited they may be for display on TV monitors and computer screens and iPods. In 1990 he seems to have realized that he needed to pick up the pace. Of "GoodFellas" (ASL 6.7 seconds) he remarked: “I guess the main thing that’s happened in the past ten years is that the scenes [shots] have to be quicker and shorter. ["GoodFellas"] is sort of my version of MTV...but even that’s old-fashioned? ("The Way Hollywood Tells It," p. 152).

Much more, including some revealing details about the film's production (and Hong Kong action cinema in general) at the always stimulating Bordwell/Thompson blog.