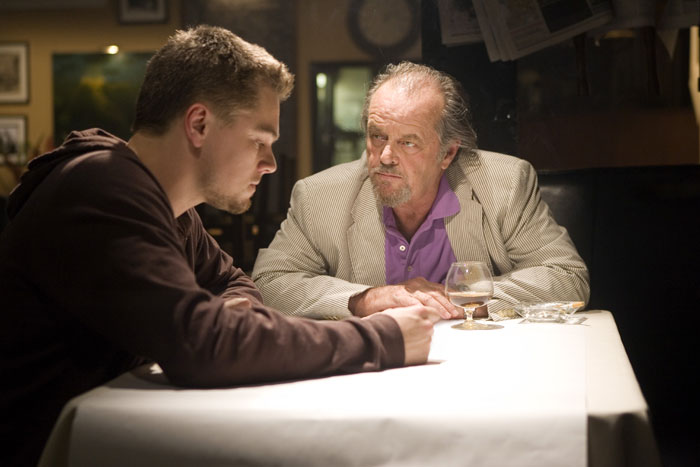 Jumpy: a scene from "The Departed."

I actually enjoyed the film more the next time around, and I think the usual forces are at work here: 1) since I already knew where it was going and how it was going to get there, I wasn't bothered so much by my memories of "Infernal Affairs" and how many sequences, performances and techniques I thought were more effective in the earlier movie; and 2) some of the rough spots often seem to smooth out a little once you've been over them before. I've always found this to be true with movies, and maybe even more so with music: the irritating things that stick out the first time don't seem quite as glaring with repeated exposure, if only because you already know they're there, and that makes them easier to accept, get past (and, perhaps, downplay).

Even Jack Nicholson's meretricious Jack-off performance seemed slightly less awkward, a little more nuanced (in spots) the second time. But I still think it's the movie's most conspicuously damaging flaw.

I took note of a couple scenes I thought were cut together in discontinuous ways that were particularly distracting and harmful to the performances. The first is in the seafood restaurant (with the nun and the priests sitting by the window). It's mostly a conversation between Frank (Nicholson) and Billy (Leonardo DiCaprio), intercutting two shots from different angles, one favoring Frank on the left and the other favoring Billy on the right. With both actors' faces fully visible in both angles (they're seated side by side), the challenges of matching shots is doubly difficult. DiCaprio changes expression or shifts the direction of his gaze -- sometimes dramatically -- from cut to cut.

Something similar happens in the scene in the bar between Frank and Billy, where Frank makes his rat face and lights the drawing on fire. Here, most of the discontinuity is in Nicholson's performance -- possibly because he reportedly improvised a lot of business for this scene. I suppose you could make an argument that the jumps and shifts space and demeanor indicate that Frank is coming apart at the seams (or splices).

But, again, it's a trade-off. Scorsese may have chosen these takes because he liked what the actors were doing in each of them and wanted those moments in his film. On the other hand, because the footage doesn't cut together so smoothly, some of us were thrown out of the picture by these jarring cuts.

The two scenes I found the most thoroughly enjoyable, aside from every minute Mark Wahlberg or Alec Baldwin were on screen, were (like those characters) newly created for "The Departed" and not in "Internal Affairs." The first is the charming encounter in the elevator between Colin (Matt Damon) and Madolyn (Vera Farmiga), where they spar and she gives him her card. The second is the one in Madolyn's office between her and Billy, as they try to out-psych each other.

Anybody else see things a bit differently upon watching "The Departed" for a second time? Got specific examples of what you thought worked or didn't work? This "Departed" topic (see below) and its follow-up have received the most comments of any postings in the brief life of Scanners!