Southland Tales: No sparkle, no motion 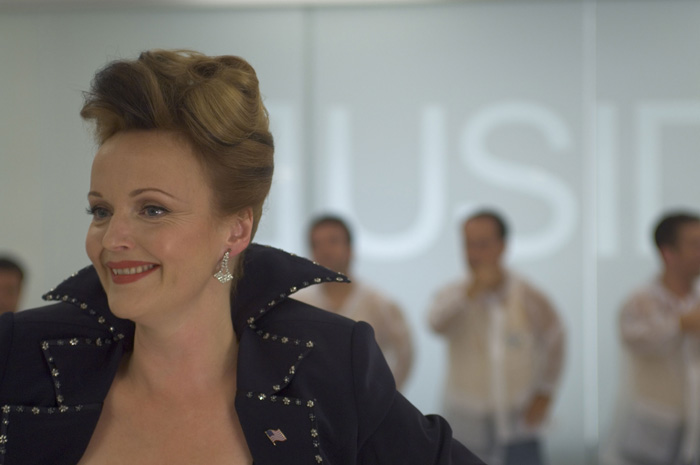 The evil queen and her dwarves. How clever. This was the shot that almost prompted me to walk out. I can't believe they used it for a production still. Yes I can.

Sometimes I doubt Richard Kelly's commitment to Sparkle Motion. The first time was the "Director's Cut" of "Donnie Darko," which de-emphasized all that was mysterious and exciting about the original film by insisting on a literal explication of the time-warp theories of Roberta Sparrow (aka "Grandma Death"). Huge mistake -- as bad as showing us the inside of the mothership in the "Special Edition" of "Close Encounters of the Third Kind." At least Spielberg knew that was an error, and removed it from his Director's Cut: He'd wanted to tweak things he'd had to rush in order to meet his deadline (after all, the fate of Columbia Pictures was riding on this picture), and to flesh out some character details. But Columbia let him go back and fine-tune his blockbuster on the condition that he show Richard Dreyfuss inside the ship -- something we really didn't want to see, because it ruined the uplifting momentum of the ending, and who wants to see Richard Dreyfuss crying over anti-climactic special effects anyway?

"Southland Tales" is the product of the same literalist sensibility that produced the second version of "Donnie Darko." Part of me questions whether it's even worth writing about, mainly because it offers so little of cinematic interest. It's fussy and inert, like Part 4 of a PowerPoint slide-show based on a set of elaborately drawn storyboards that explain in excruciating detail the minutiae of the mythology behind "Hudson Hawk." There's nothing close to a movie here.

There's an obvious channel-surfing aesthetic to mimic "information overload," but nothing's on, anyway. One shot could just as easily be followed by any other shot -- they aren't cut together with any verve or intelligence, so the effect is flat and linear. We flip by a beachside talk show ("The View" with porn actresses), and that's as sophisticated and penetrating as "Southland Tales" ever gets about sex, politics and media. (He said "penetrating"!) Is it hard to follow? Not really. The voiceover makes sure everything is explained (often more than once), but it could just as well not have been explained and it wouldn't matter, because nothing is illuminated in the explanation.

Like "Hudson Hawk," it's a bloated, white-elephantine vanity production (for the writer-director, not the star) -- a strained, deliberate, joyless, big-budget, star-studded Hollywood effort to manufacture a "cult movie" by pandering to what some studio execs probably consider to be "the comic-book youth demographic." It wishes it could be "Repo Man" (or "RoboCop" or "Starship Troopers") but it's not even "The Postman." Actually, "Southland Tales" -- co-financed by Universal, which is distributing the film internationally but dropped any domestic plans after the disastrous reception at Cannes -- isn't "big-budget" by today's Hollywood standards ($17 million). But the feeling of waste and desperation behind it -- "Let's throw money at the screen for big sets and unimaginative digital effects!" -- is not unlike that dead-lump-in-your-stomach feeling you get while watching your average Michael Bay movie. [Since writing this, I have learned that the time and (Sony) money spent re-tooling "Southland Tales" after Cannes has included cutting 20 minutes, adding to Justin Timberlake's too-literal voiceover, and beefing up the special effects. That's what I was afraid of. It shows.]

"Just because it's loud doesn't mean it's funny," says a character played by Amy Poehler, and the words land with a lifeless thud, as if everybody on the set were trying to pretend that wouldn't become the picture's epitaph. What's missing is resonance -- a quality that's hard to define. Will "Southland Tales" become another "Hudson Hawk"? "Howard the Duck"? "Spaceballs"? "Strange Days"? "1941" (1979)? "It's a Mad Mad Mad Mad World"? "Battlefield Earth"? "Brazil"? "Baby Geniuses"? Maybe, but I doubt it's memorable enough to make much of a lasting impression. (Mike Judd's virtually unreleased "Idiocracy" strikes me as a much smarter and funnier satire.)

Of course, every cult movie -- even a calculated one like "Southland Tales" -- has its partisans, who will say it's a mess, but revel in it as an ambitious mess. But is it a "mess," or is it exactly what it's meant to be? The more pertinent question for me is: What is the nature of its ambition, and how does it manifest itself? There's not an image or a joke or an idea that isn't hackneyed. The movie has already dated badly, and probably would have felt so in 1997, when it feels like it was conceived. (One character mentions a URL for an underground neo-Marxist revolutionary pirate web site and spells out the "WWW." Maybe that's meant to be funny. It isn't when it happens.)

My favorite joke, I thought, was a title that indicated the early part of the movie as episode "IV." You know, like "Star Wars." Then I find out at All Movie Guide that "director Kelly also created an accompanying series of three graphic novels which chart these events and characters prior to this story." See what I mean? The whole thing is so literal that everything has a banal explanation.

I don't want to pile on after the movie has flopped with audiences and critics, but let me describe one shot. It's the only one that sticks with me because it was the moment I felt I had to decide whether to walk out or not. (I'd checked my watch when I thought it was just about over, about an hour and 15 minutes in -- something I never do, but I was confident I wouldn't disturb the other guy in the theater because he was way up in the back on the left.) So: Miranda Richardson, as the Disney animated villainess at the headquarters of the government domestic surveillance agency, US-IDENT, leads her staff through office calisthenics. The camera dollies past the stretching employees in their cubicles and when it gets to her, she bends down to reveal... a line of exercising dwarves! (I know the proper term is "little people," but this picture treats them as a freakshow sight gag. If anyone ever spoke of them, they would probably be called "midgets." That's the movie's sense of humor.) Anyway, it was so pathetic it made me really angry. But I stayed through the whole thing. Let me tell you: Nothing else happened worth mentioning.

P.S. I did enjoy the performances of Cheri O'Teri, Sarah Michelle Gellar, Justin Timberlake, Seann William Scott, and Jon Lovitz, though. Their in-the-moment energy is what kept me watching.

P.P.S. Just found this paragraph, from Scott Foundas at the L.A. Weekly, that hones in on something I found annoying about the movie, which is its inability to absorb its own explicit references:

As I wrote from Cannes, Kelly seems to think that to merely mention Fallujah or global warming — or to name a bank after Karl Rove — is the same as actually having an opinion about them, and his all-you-can-eat buffet of cinematic in-references (to say nothing of his Bartlett’s-style quoting of Eliot, Yeats and the Book of Revelation) operates on pretty much the same superficial level. The movie’s frequent invocations of "Kiss Me Deadly" and "Mulholland Drive" have been much discussed, but in addition, "Southland Tales" pilfers large chunks of its plot and visual style from Alex Cox’s "Repo Man," Kathryn Bigelow’s "Strange Days" and Shane Carruth’s Sundance-winning "Primer," and unlike the makers of those films, Kelly hasn’t digested his influences and made them his own — he’s more like the slacker college kid who’s just enough of an intellectual poseur to bluff his way to an A.