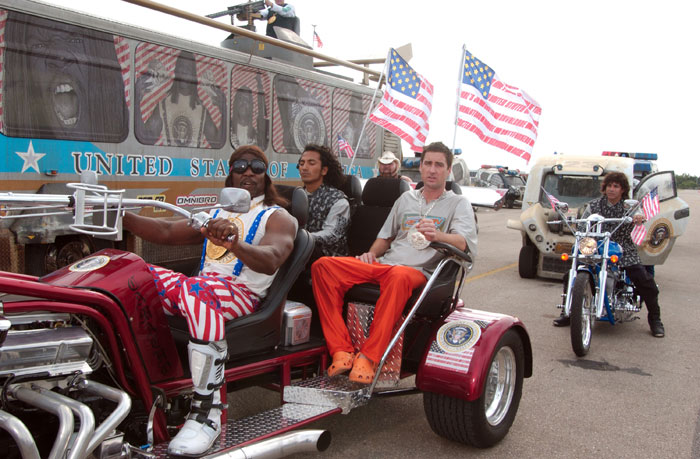 Imagine a country where, even at the highest levels of power, ignorance is flaunted and incompetence rewarded. OK, maybe that's too easy. Imagine a studio dumping a movie because it just doesn't know how to sell it. Well, that doesn't take any imagination at all, does it? "Idiocracy," the new film by Mike Judge ("Office Space," "King of the Hill," "Beavis and Butt-Head Do America"), opened in a handful of theaters in the United States while I was in Canada for the Toronto Film Festival. When I got back I learned that none of those theaters was in Seattle, so -- guess what? -- I haven't been able to see it.

But Dennis Cozzalio at Sergio Leone and the Infield Fly Rule reports that it's superficially dumb, deceptively smart -- and funny:

The groundwork for "Idiocracy" is laid in a hilarious parody of authoritarian educational films that exposes the roots of humanity’s slippery slide toward pea-brain-osity in the frigidity of intellectuals (or at least their yuppie subset) and the unchecked rutting of the uneducated poor. Smart folks are too selfish to procreate, while Li’l Abner and Daisy Mae can’t keep their genitalia to themselves.

Sounds simple enough, right? But by the time the movie really gets going Judge has laid culpability for the crumbling mental capacity of society at the feet of lawmakers, corporations and opportunistic politicians too. And let’s not forget the military—insofar as they represent by definition the aggressive arm of any government, Judge certainly hasn’t. A low-level army base slacker (Luke Wilson) and a randomly selected hooker (Maya Rudolph) are selected to participate in a military experiment, headed by an officer with more than just a little taste for the pimpin’ lifestyle—that’s how the hooker gets roped in. The experiment is designed to monitor physical changes in cryogenically frozen subjects over a period of a year. But when the officer’s illegal activities end up getting him imprisoned and the base bulldozed, Wilson and Rudolph are left on ice not for a year but for 500. The pair, barely three digits in the IQ department between them to start with, awaken to a world so battered and worn down by an abased pop culture, relentless corporate corruption and political ineffectuality that they are, by acidly ironic default, the smartest people on the planet.

I recommend checking out Dennis's essay about the film -- and what happened to it -- here. (BTW, as I write this, "Idiocracy" has a 71% rating on RottenTomatoes.com, compared to 43% for last week's box-office topper, "Gridiron Gang"; 31% for Brian DePalma's "The Black Dahlia"; and 17% for "All the King's Men," opening Friday.)