Scorsese at his best: "The Man Who Set Film Free" 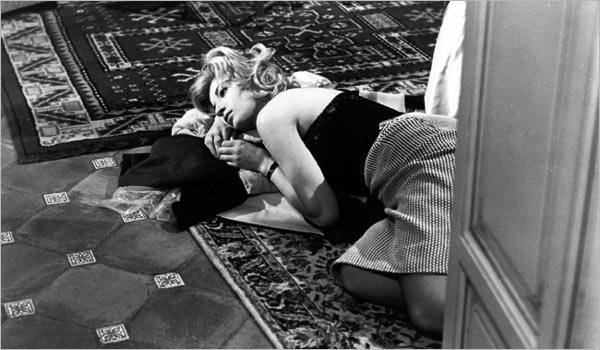 While I was gone, the New York Times printed a magnificent appreciation of Michelangelo Antonioni written by Martin Scorsese, called "The Man Who Set Film Free." This piece, which begins with Scorsese recalling the profound effect of seeing "L'Avventura" for the first time in 1961, is so moving, and so perceptive, that I think it ranks with the best work Scorsese has ever done in any medium. Reading it brings tears to my eyes -- like a great film does.

Scorsese traces how the film keeps redirecting, reshaping, and dissolving the narrative before our eyes. Is it an "adventure" or an intrigue, as the title suggests? Or a missing-person mystery? Or a detective story? Or a love story? Or a betrayal/revenge story?

But right away our attention was drawn away from the mechanics of the search, by the camera and the way it moved. You never knew where it was going to go, who or what it was going to follow. In the same way the attentions of the characters drifted: toward the light, the heat, the sense of place. And then toward one another.

So it became a love story. But that dissolved too. Antonioni made us aware of something quite strange and uncomfortable, something that had never been seen in movies. His characters floated through life, from impulse to impulse, and everything was eventually revealed as a pretext: the search was a pretext for being together, and being together was another kind of pretext, something that shaped their lives and gave them a kind of meaning.

The more I saw “L’Avventura” — and I went back many times — the more I realized...

... that Antonioni’s visual language was keeping us focused on the rhythm of the world: the visual rhythms of light and dark, of architectural forms, of people positioned as figures in a landscape that always seemed terrifyingly vast. And there was also the tempo, which seemed to be in sync with the rhythm of time, moving slowly, inexorably, allowing what I eventually realized were the emotional shortcomings of the characters — Sandro’s frustration, Claudia’s self-deprecation — quietly to overwhelm them and push them into another “adventure,” and then another and another. Just like that opening theme, which kept climaxing and dissipating, climaxing and dissipating. Endlessly.

Where almost every other movie I’d seen wound things up, “L’Avventura” wound them down. The characters lacked either the will or the capacity for real self-awareness. They only had what passed for self-awareness, cloaking a flightiness and lethargy that was both childish and very real. And in the final scene, so desolate, so eloquent, one of the most haunting passages in all of cinema, Antonioni realized something extraordinary: the pain of simply being alive. And the mystery.

“L’Avventura” gave me one of the most profound shocks I’ve ever had at the movies, greater even than “Breathless” or “Hiroshima, Mon Amour” (made by two other modern masters, Jean-Luc Godard and Alain Resnais, both of them still alive and working). [...]

The last seven minutes of “L’Eclisse,” the third film in a loose trilogy he began with “L’Avventura” (the middle film was “La Notte”), were even more terrifying and eloquent than the final moments of the earlier picture. Alain Delon and Ms. Vitti make a date to meet, and neither of them show up. We start to see things — the lines of a crosswalk, a piece of wood floating in a barrel — and we begin to realize that we’re seeing the places they’ve been, empty of their presence. Gradually Antonioni brings us face to face with time and space, nothing more, nothing less. And they stare right back at us. It was frightening, and it was freeing. The possibilities of cinema were suddenly limitless.

Since Antonioni's I've been making a few notes on how his films strip away the illusions of "meaning" we invent for ourselves -- from god to that most sacred of myths, storytelling itself -- for a future post....