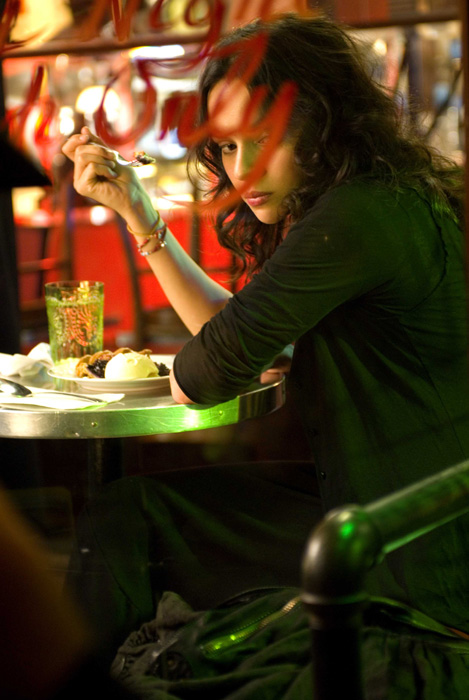 A graffito on Norah Jones.

It's confession time again here at Scanners: I've never gotten into Wong Kar-Wai (aka -wai, aka -Wei). I watched about half of "Chungking Express" and it seemed like better-than-average Tony Scott, but that didn't particularly interest me. (I guess I was hoping for something more like the hilariously deadpan first segment of Jim Jarmusch's "Mystery Train," which is what various descriptions had led me to expect.) So, while humming Peggy Lee ("Is That All There Is?"), I turned it off and vowed to give it another shot at some future date. Never happened. And I wanted to see "2046" (despite my, er, reservations), but when I found out it was a semi-sequel, I felt like I should first see its predecessor, "In the Mood For Love" and (although I have both saved on my TiVo -- in HD, no less) I've never gotten 'round to either.

Now my friend (and MSN Movies Editor) Dave McCoy, who's disliked more Wong than I've even seen (but likes "In the Mood for Love"), writes about the shade-sporting hypester's English-language "My Blueberry Nights" from Cannes. This would have been ideal for the Contrarianism Blog-a-Thon:

I'll admit it: I don't get Wong Kar-Wai. I don't get his movies, I don't get his silly dark glasses that everyone else finds chic and cool, and I especially don't get the universal adoration heaped upon him. It's one of those things I know I should probably appreciate more. Like Björk. Or Thomas Pynchon. Or golf. Or brussels sprouts.

When the Hong Kong (by way of China) filmmaker burst on the international scene with "Ashes of Time" and, more prominently, "Chungking Express" in 1994, he immediately became both a critical darling and cult fan favorite. I found both films boring stylistic exercises. Friends told me his next film, "Fallen Angels," would turn me around. "It's got multiple story lines; you like Altman!" they said. I couldn't make my way through it. "Happy Together," an emotionally brutal gay love story, won him Best Director at Cannes in 1997. I fell asleep during it. His last film, "2046," an experimental sci-fi/time-travel thingy was so pretentious and infuriating and laughable to me that I walked out of the press screening. Of course, it topped numerous critics' top 10 lists in 2004 and that's when I started referring to the director as Wong Kar-WHY? But what about "In the Mood for Love," you ask? OK, I'll give you that one, in that he toned down the "look at me" cheap theatrics and for the only time made me feel something for Kar-Wai's tragic characters. And Tony Leung's performance killed me. [...]

But here's the thing: I always give WKW another chance. I always feel like, yes, this is the one that will turn me around! [...]

Look folks, I tried ... but "My Blueberry Nights" flat blows.... It's atmospheric ... it looks cool, man. And all of his other showy, decorative tricks made the trip to America, as well: the lingering slo-mo shots of actors looking into space (soooo deep), the claustrophobic framing, the melancholy soft focus -- everything, we suddenly realize, to take our mind away from a thin story about lost love and shattered souls that we've seen hundreds of times.... It'll probably win the Palme d'Or.

My one consolation happened when I was sitting in a movie theater before the next screening. Two prominent critics were talking to one another. One asked how the other was doing, and he replied, with lovely sarcasm, "I just flew in today and had Wong Kar-Wai inflicted on me." Right on, my brother. You don't by any chance hate brussels sprouts, too?

1) Brussels sprouts are my favorite green vegetable. Steamed with butter, garlic and a little lime juice. I'm telling you...

2) Although Dave is perfectly correct to characterize lead actress Norah Jones as "the pleasant singer whose CD is found in every soccer mom's gas-guzzling SUV" (and, yes, she's probably been the subject of as much fashionably middlebrow hype as the Great Wong), she has achieved one moment of sublimity, a year or two before her rather bland debut album. Listen to her sing Roxy Music's "More Than This" on Charlie Hunter's "Songs From the Analog Playground." It's heaven.

3) Read the whole piece, with Dave's specific observations about "Blueberry Nights" (is that a wine spritzer?), and please feel free to rise to Wong's defense with your comments.

4) My advice: Beware of films bearing Natalie Portman, the Julia Ormond of the 00's. Or at least approach them with trepidation. (OK, I did think she was good in "Closer." So good I forgot it was her.)

5) Anybody feel similarly about other much-ballyhooed contemporary sacred cows (and Cannes winners) like, say, Abbas Kiarostami, or Lars von Trier, or Theo Angelopoulos, or Quentin Tarantino, or... ?