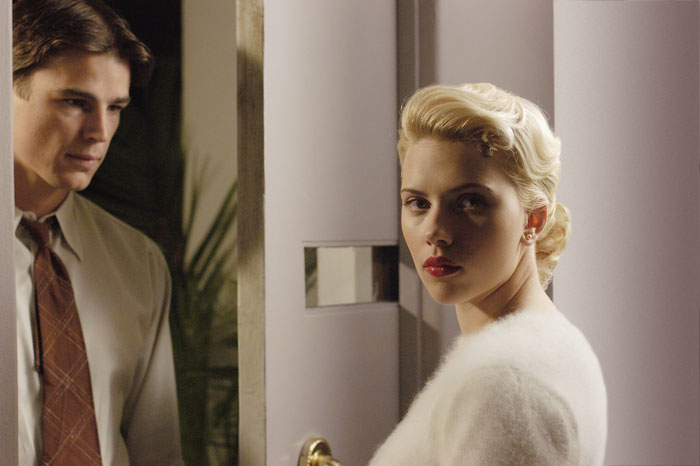 Look back in Angora: An Ed Wood moment between Josh Hartnett and Scarlett Johansson in Brian de Palma's "The Black Dahlia."

In anticipation of Brian de Palma's "The Black Dahlia," which premiered at the Venice Film Festival to bi-polar reviews and opens in the US September 15, a number of sites are celebrating the modern master of the rapturous moving camera. (See De Palma a la Mod for all the latest on De Palma and the Dahlia.) Dennis Cozzalio has an excellent round-up of who's doing what at Sergio Leone and the Infield Fly Rule, and adds his own illuminating thoughts to the heady mix. (And don't forget to check out his Opening Shots submission for De Palma's "Femme Fatale" here at Scanners.)

Peet Gelderblom also has some good stuff about the "unofficial De Palma blogathon" at Lost in Negative Space. And I finally took the advice of That Little Round Headed Boy and caught up with De Palma's much-maligned "Mission to Mars," which has moments of astonishing beauty and suspense, despite being hobbled by a terrible script (original screenwriters joined by an ampersand; re-writer Graham "Speed" Yost tacked on with an "and") and one of the most lifeless performances I have ever seen from Connie Nielsen. (How could she not have been fired after the first day? She's heavier-than-leaden in almost every single moment she has on screen -- except the marvelous weightless dance sequence to [and you have to appreciate the humor] Van Halen. Other than that, like a Martian tornado she sucks.) De Palma is a terrific director of women (Margot Kidder, Sissy Spacek, Piper Laurie, Betty Buckley, Amy Irving, Carrie Snodgress, Nancy Allen, Angie Dickinson...) but Nielsen is really Not of This Earth. (TLRHB also features some informative comments about "Mission to Mars," including a link to Matt Zoller Seitz's round-up of reviews, from pans to raves.)

I've said this many times before about De Palma, but give this guy a decent screenplay and he can work wonders. Look what he can do even when he doesn't have one. So, give the guy a good script, already!