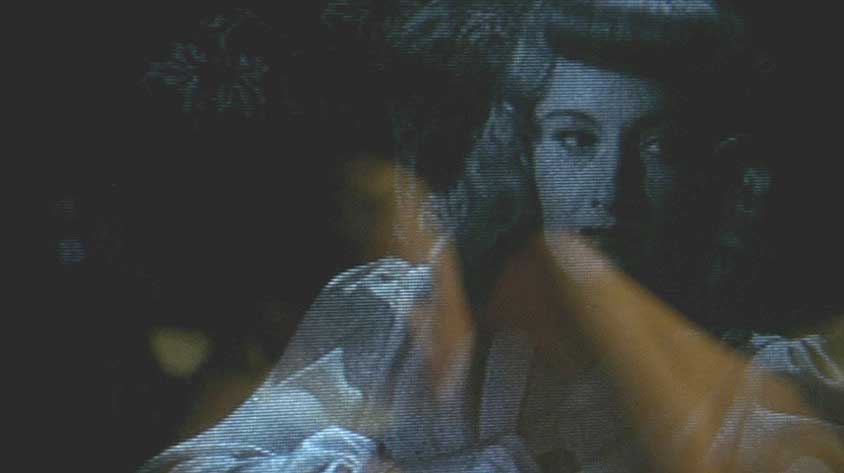 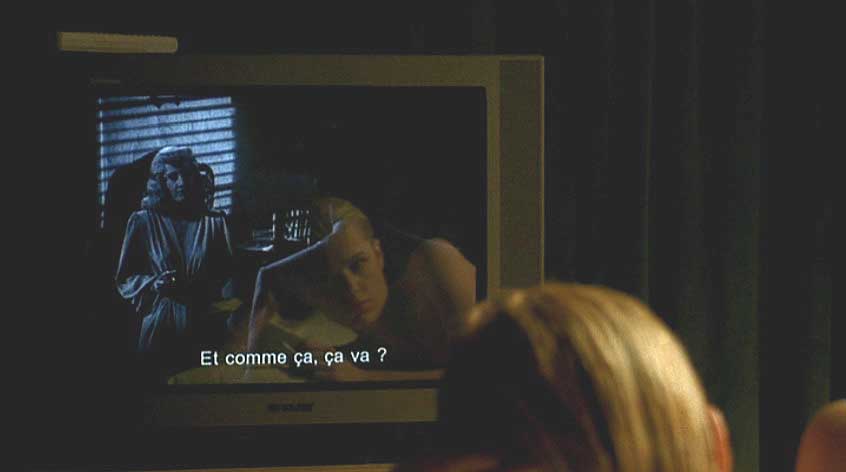 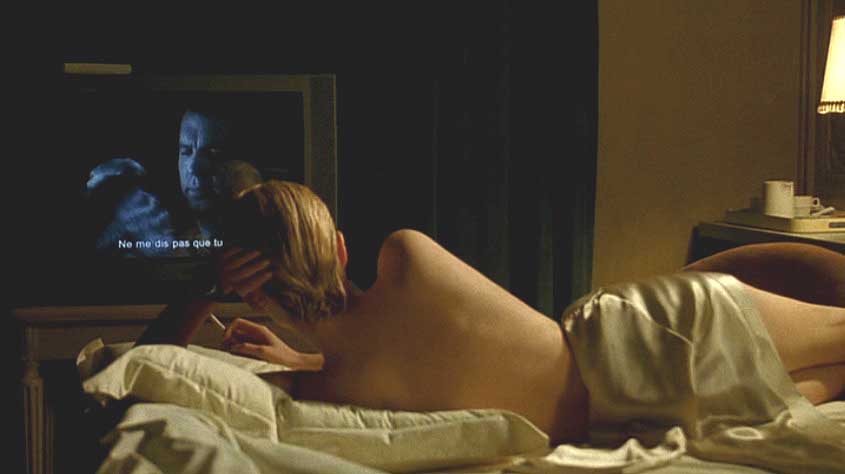 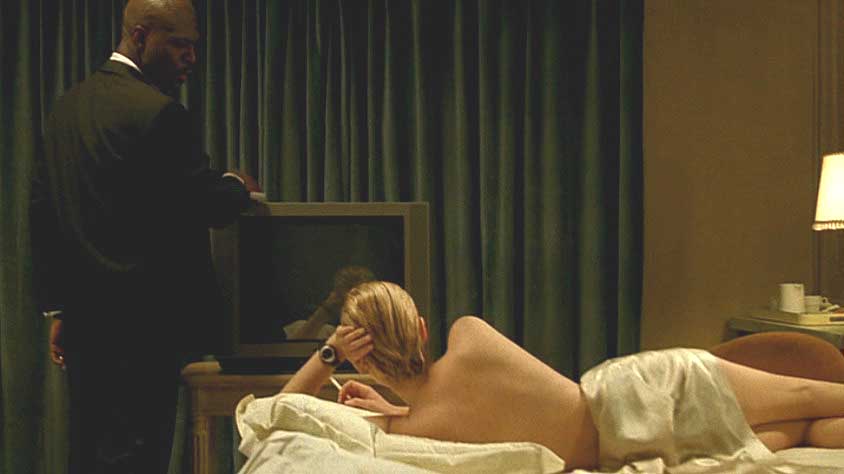 From Dennis Cozzalio, Sergio Leone and the Infield Fly Rule:

Brian De Palma’s exceedingly stimulating and sensational consideration of femme fatale iconography and the possibility of redemption within it begins with one of the director’s customarily brilliant, multilayered opening shots. Under the black of the producers credits, familiar voices are heard. It’s Fred MacMurray. Fade up on a shot of an extreme close-up of a TV. It’s MacMurray, 525 broadcast lines blown up to big-screen size, in "Double Indemnity." But a close examination of the image reveals a splash of color -- something else is visible here, contrasting with the black-and-white images of Billy Wilder’s film. It’s a reflected image of a half-naked woman stretched out perpendicular across the TV screen. She is watching "Double Indemnity," and we see her watching the movie in her reflection off the glass TV screen. "Double Indemnity" continues to play out, crosscutting between MacMurray and the original femme fatale, Barbara Stanwyck (as Phyllis Dietrichson).

The image of the young woman becomes clear, yet remains slightly ghostly, as the image in Wilder’s film darkens. MacMurray moves to close a window, when a shot rings out. Stanwyck has betrayed him with a bullet, and the title credit "Femme Fatale" pops on screen at the same time, as the ethereal image of the woman, reclining on her side, dispassionately watching the movie, lingers. (The title credit “A Film by Brian De Palma" was earlier synchronized with Stanwyck’s first appearance on the TV.) Now De Palma’s camera begins to pull back. We see the cabinet of the TV, and we can now also observe that there are French subtitles superimposed on Wilder’s film. The image of the woman reflected in the TV seems even clearer now, as we continue to pull back, seeing her much more clearly in the flesh, gray tendrils rising from the cigarette she’s smoking while watching the TV. At this point there is double layering of the woman’s image, the reflection and the person being reflected, over the image of Stanwyck, who has taken a dominant position over her wounded lover as she confesses her machinations against him. 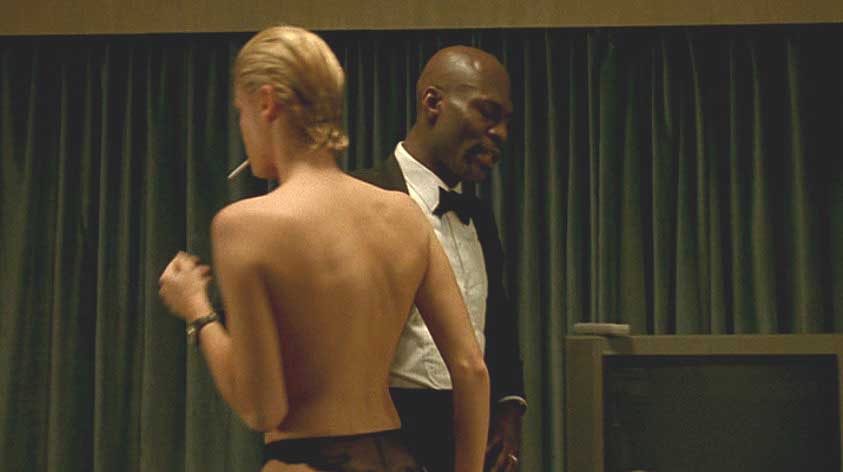 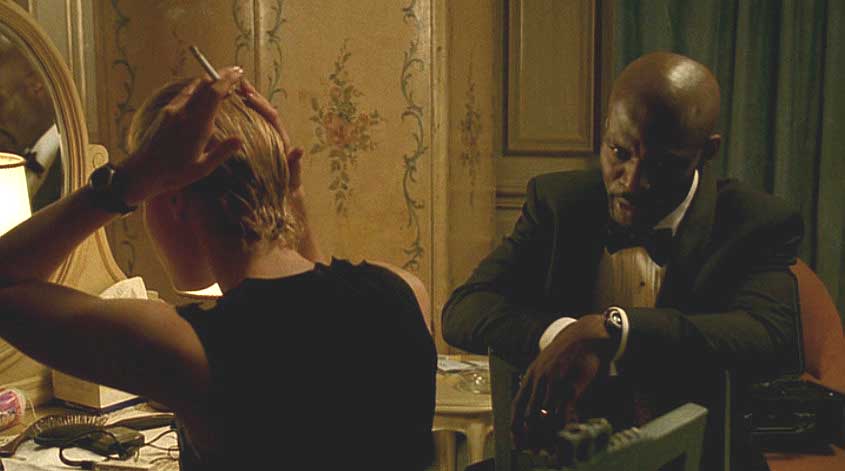 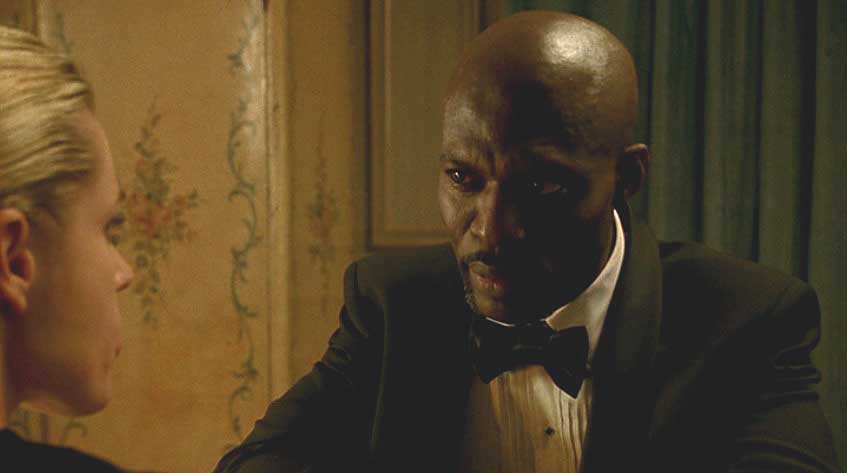 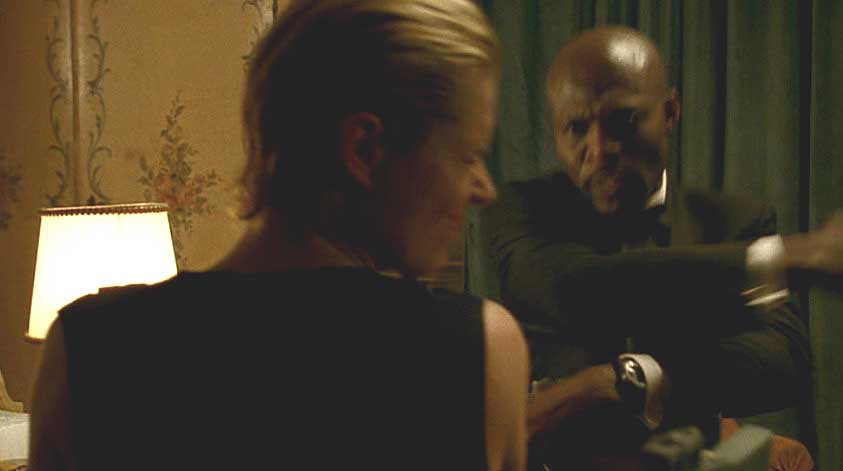 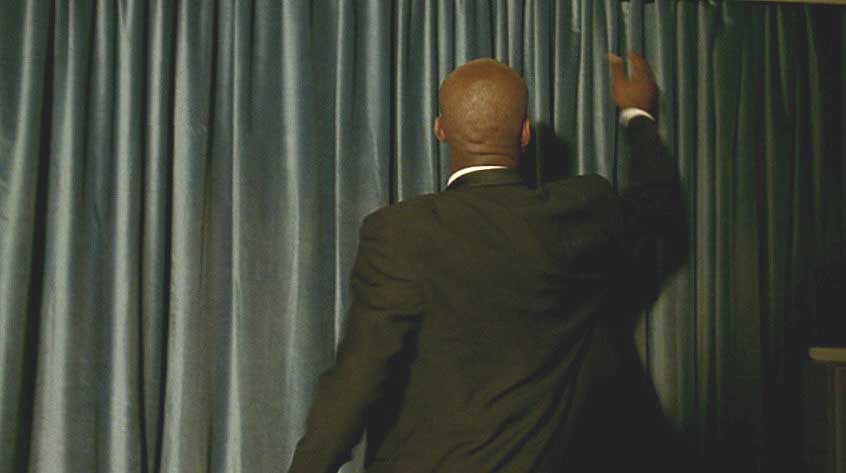 The camera pulls all the way back to reveal that the woman watching is nude, her ass covered by a sheet, her bare back and legs exposed to us. Like the samurai in "Yojimbo," we’ve not had a clear look at her face, except for what we could discern in the reflection on the TV screen, and we’ll be denied one for the length of the shot. Suddenly a door opens (off screen), outside light briefly streams in and the door closes, as we hear a man’s voice say, “What the fuck are you doing?" A black man in a tuxedo enters the frame from the left and turns off the TV. The woman has not moved, not acknowledged his presence, not said a word. The camera begins moving in on him as he begins to quiz her. “Do you know what time it is?" She gets up off the bed, revealing that she is at least wearing black panties, but totally unself-conscious in this man’s presence in the fact that she is otherwise naked. She stands and moves across him to the left, still smoking. She begins to dress and he continues in what seems at first to be a parody of the hardboiled language we’ve just heard and seen on the TV: “Listen up. At 2200 Wetsuit’s down the hole when the snake hits the carpet. Security lifts the key. I terminate the torpedoes." The woman has now put on her top and moved completely out of frame to the left. “Charm the snake into the stall. Bait and switch. At 2220 Wetsuit turns out the lights. Glasses on. I bag the snake." The camera is now pulling back as he moves left to where she is. “Key in the bag. Bag to the boat. No radio unless absolutely necessary." The man has now seated himself next to the woman backward on a chair, as she continues to prepare herself at a vanity. She has still offered no response to what he is saying, or even really acknowledged his presence, or whether she is even hearing what he is saying or not. She tamps down her slick, short, dyed blonde hair with both hands, still holding a cigarette in the left. “Code red, five minutes to blackout. Drop everything. Walk away. If the cops catch you, tell them the truth. You know no one. Got it?" By now the man has begun staring at her intensely, looking for some hint that she is processing what he is saying to her. “Got it?" She leans into the frame, looks directly at him, coolly blows smoke in his direction, and nods. “You have your passport?" She flicks it into frame very casually. He peruses the document and continues: “The plane leaves tomorrow at 0700." She flippantly offers a mock salute, as if to say, “Yes, sir, sir!" He smiles. “And remember, no names and no guns." Suddenly there is the sound of a crowd chattering and milling about outside. The man acknowledges it with a cursory glance, but before we have had the chance to really process it ourselves, he leans forward slightly and slaps the woman hard across the face. She leans back, absorbs the blow and then slowly leans forward into a straight-up sitting position, her face still turned away from us and toward him, never taking her eye off of him. He continues: “Are you high?" She shakes her head slowly. “Then stop dreaming, bitch. This isn’t a game tonight. People can die. Now get moving." He places the passport in his jacket pocket, rises up off the chair and moves away from her, toward the drawn curtain at the center of the room (and the frame). We become aware again of the sound of that mysterious crowd outside. He turns to her again, bends down out of frame and retrieves a headset, holds it up to her and says, “You forget something?" The woman emerges from the left, walks up to the man, never taking her eyes off his face, and grabs the headset from him. The producer’s credits are superimposed on the man as he rubs his hands together and considers this unflappable, impossibly cool woman. He adjusts his tie and his lapels, and light once again floods the room as the woman opens the door off screen. He turns sharply toward the window, reaches up and throws open the shade. Cut to a long shot of the red carpet on closing night of the Cannes Film Festival. The credit is superimposed over the scene of the festivities: Directed by Brian De Palma.

JE: You picked a doozy here, Dennis! And there's so much communicated in this shot beyond the dialogue and the details of the caper, too. First, there's "Double Indemnity" -- the climactic scene of "Double Indemnity," after MacMurray's plans have gone awry and he's wised up to what a sucker he's been -- with French subtitles. Well, the movie is called "Femme Fatale," a French phrase, and now we assume we're probably in France. Visually, with that reflection/superimposition, De Palma transfers the title from Stanwyck to his "femme fatale" -- and, in movie terms, updates her in the process: She's still a blonde, but she's got a modern androgynous haircut... and she's nude, which is not something you would have seen in a 1944 Paramount Picture. (Also, something tells me this woman is not watching "Double Indemnity" for the first time; if anything, she's refreshing her study of it for her role in the movie we're about to see.)

I love the way De Palma compartmentalizes screen space here, too, using frames within frames. (Remember, this is a guy who loves split screen: "Sisters," "Carrie"...) First there's the TV screen (which is also a mirror), then the window that is obviously behind the drapes, and which will be used for the final reveal you describe. As you say, the journey is from a film ("DI" on TV) ... to a film festival (outside the window). De Palma keeps composing and re-composing -- and I think my favorite little moment is when she thrusts her head into the left edge of the frame (this profile is the closest we get to seeing her non-reflected face) to defiantly confront the man, coordinator of the unfolding plot, who is there to keep her in line. At the mirrored vanity, we have more frames-within-frames, but De Palma keeps us craning our necks to see more (kind of like Polanski's famous doorway shot of Ruth Gordon on the bedroom phone in "Rosemary's Baby"). He never actually shows us a clear reflection of the woman in those mirrors, frustrating our expectations. At the end of the shot we don't see her leave, but the light from an opened door (to the bathroom? hallway?) spills into the room. The movie's visual strategy has been beautifully set up now: We will be seeing pictures within pictures, one part of the whole but never the Big Picture... until the end of the picture.