The Ultimate Review of "The Departed" 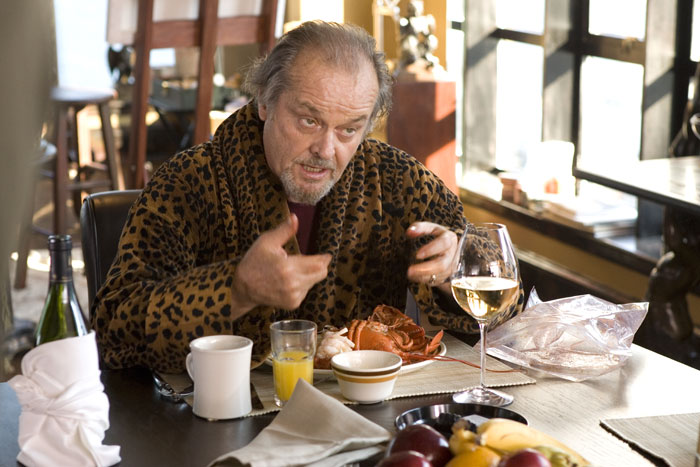 Everybody's saying "The Departed" is Martin Scorsese's best picture since "Casino" -- or even "GoodFellas." And some of the (over-)praise has struck me as pretty condescending to Scorsese: "Good boy. You stick to your mobsters now, won't you?" I'll go out on a limb and say I think it's his best picture since "The Aviator."

Adding almost an hour to the running time of "Infernal Affairs," the film on which it's based, "The Departed" does indeed fill in some of what one critic called the "ellipses" in the plot of the original film (and opens up at least as many other holes in the process). And yet, as others have also observed, Scorsese's movies have never been driven by plot but character -- and, in "The Departed," the characters, performances, moral ambiguities, and even the filmmaking prowess itself (all the things we treasure in A Martin Scorsese Picture) are not as rich or developed as those of its 2000 Hong Kong predecessor, much less Scorsese's own best and most personal work. (And let me add that this is not a knee-jerk response; I'm no big fan of Hong Kong action films. What I liked about "Infernal Affairs" was that there was more going on than in most of the HK crime movies or policiers I've seen, which I thought were bursting with empty action and little else.)

I'm going to write more about "The Departed" next week (to continue what I began in my MSN Movies essay, "GoodFellas and BadFellas", but in the meantime, I've patched together some of the critical observations from others that made me go "Yes! That's it!" -- either because I felt the same way, or because they expressed something I hadn't been able to formulate for myself in my initial thinking about the movie.

Meanwhile, after taking a look at these critical observations, please weigh in with comments of your own. (Just remember, it may take a while for comments to actually show up on the site.)

Martin Scorsese’s return to the contemporary gangster genre — via a remake of Andrew Lau and Alan Mak’s glossy, stylized Hong Kong film of 2002, “Infernal Affairs" – has a bored, dutiful feeling, as if Woody Allen had been forced to remake one of his “early, funny ones." The plotting is completely artificial, and makes sense only within a context of self-conscious formal play: a junior member of Boston’s Irish mob (Matt Damon) is assigned by his eccentric godfather (Jack Nicholson) to infiltrate the ranks of the Massachusetts State Police, at the same time a dutiful police cadet (Leonardo DiCaprio) is assigned by his boss (Martin Sheen) to ingratiate himself with Nicholson’s gang. For the first hour or so, Scorsese and his editor, Thema Schoonmaker, treat the material as a premise for a virtuoso exercise in parallel montage; the film achieves a fugue-like structure at times, as Scorsese and Schoonmaker move through three or four levels of simultaneous action at once, finding creative and sometimes quite beautiful transitions based on matching rhythms, textures, movements, and shapes.

The movie works smashingly, especially if you haven’t seen its Hong Kong counterpart and haven’t a clue what’s coming. But for all its snap, crackle, and pop, it’s nowhere near as galvanic emotionally. The star of "Infernal Affairs," Tony Leung, had the stillness of a volcano; in the film "Hero," he made practicing calligraphy seem fiery. DiCaprio, as good as he is, is on the lumpish side. He has a wide face and lots of brow to furrow, but Scorsese doesn’t linger on him long enough to help us connect with his feverish alienation. It’s easier to read Damon, with his darting little eyes and slippery-squirt smile, but we don’t give a fig about him. [Screenwriter William] Monahan has made the character more of an out-and-out villain—a conscienceless opportunist—than he was in the original. Sullivan hungers for a career in politics. He has no loyalty to anyone, not even his surrogate-father crime boss, and so he has no dramatic stature. Plus, he’s lousy in bed.

...[In] moral terms it may be the least involving story that Scorsese -- an artist much preoccupied with morality -- has ever taken on. Costigan [DiCaprio] spends years working for Costello [Jack Nicholson], unencumbered by the legal restrictions of being a sworn policeman, but he's never forced to do anything that truly repulses him; his only on-screen transgressions are a few beat downs of scumbags who have it coming anyway. Sullivan [Damon] takes advantage of his badge to romance a lively police psychiatrist (Vera Farmiga), but the relationship never prompts him to examine what he's doing with his life. The mentors are comparably one-dimensional...

Predictably, the dirty cop is having no trouble pretending to be clean, but this very ease is problematic. Sullivan remains a cipher, leaving Damon with precious little character to develop. He relies on his screen charm, which can be considerable, and his "Good Will Hunting" accent, which is formidable, yet it's just so much dressing on an opaque window.

JE: I want to mention here that I think all the performances (except Nicholson's) are terrific, especially Mark Wahlberg and Alec Baldwin, who are very funny. It's just that, as these critics have noted, the actors aren't all given full characters to play. The roles played here by Damon, DiCaprio, Nicholson and (especially) Martin Sheen were much more fully developed (and morally conflicted) in "Infernal Affairs."

"The Departed" isn't the masterpiece I have the feeling some may hail it as. It feels like the kind of movie critics might overpraise, if only because it's nice to see Scorsese back in the saddle and a treat to find a cops-and-robbers thriller with some energy and wit. [...]

In "Infernal Affairs," every plot twist clicked satisfyingly into place as the fate of the two leads converged inexorably toward a central vanishing point. The good guy pretending to be bad and the bad guy pretending to be good: What better setup for a classic existential and moral riddle? But here, for every "aha!" moment, there's an equal and opposite "ouch." It's hard to get into details without spoiling something in a movie this rife with double agents and triple fakeouts, but much of the two informants' surveillance—conducted by means of text messaging on barely concealed cell phones—is implausible to the point of absurdity, and the ending leaves several red herrings flopping on the deck. [...]

Yes, what with bullets fired between eyes and bottles smashed to faces and severed hands encased in zip-locked bags, there's gore aplenty here — another Scorsese trademark from his vintage years. But, back then, the violence arose naturally (and thus frighteningly) out of the characterizations — out of a raging bull's jealousy, or a goodfella's temper, or a taxi driver's pent-up ennui. This violence, however, jumps haphazardly out of the twitchy plot (courtesy of William Monahan's erratic script), and so it often seems gratuitous, inorganic, just splatter for splatter's sake.

Speaking of gratuitous, check out Nicholson, who, apparently channelling The Joker, mugs and rolls his eyes and delivers a performance as slovenly self-indulgent as his greasy comb-over. Astonishingly, Scorsese not only does nothing to rein him in, but occasionally adds an out-of-left-field sequence (the mobster in a literally operatic tryst with a couple of coke whores) that only encourages the guy's theatrics. The result? Rarely has a star's look-at-me turn so completely torpedoed a project. Whenever the picture threatens to gain some momentum, up pops Jack to stop it dead in its tracks.

J. Hoberman, The Village Voice (at least I hope he's still at the Voice, which has cut loose some very good critics in recent weeks):

Towering over both youngsters, Jack Nicholson has the meaty—and here vastly inflated—role of the patriarchal crime boss. Eric Tsang stole "Infernal Affairs" with his high-spirited moonfaced malevolence; Nicholson is handed the keys to the kingdom in his first scene. [...]

Neither a debacle nor a bore, "The Departed" works but only up to a point, and never emotionally—even if the director does contrive to supply his version of a happy ending. "I don't want to be a product of my environment," Nicholson boasts at the onset. "I want my environment to be a product of me." Yeah, yeah, and that's the problem. Overwrought as "The Departed" may be, it's nothing that wouldn't have been cured by losing Jack (and maybe half an hour). Too bad the bottom line meant Scorsese had to sell that hambone Mephistopheles his soul.

Mr. Damon enters the story about the same time that Mr. Nicholson exits the shadows. Too bad he doesn’t stay there until the final credits. This Janus-like actor has long presented two faces for the camera, the jester called Jack and the actor named Nicholson. He has worn both faces for some of his famous roles, but over time he has grown fond of the outsize persona called Jack, with his shades and master-of-ceremonies sneer, and it’s hard not to think that the man has become his mask. Mr. Nicholson has some choice moments in “The Departed": he owns the thrilling opening minutes and is persuasively unnerving in his early scenes with Billy, whom he only knows as a neighborhood loser ripe for the plucking.

But as the story twists and twists some more, Mr. Nicholson begins to mix too much Jack into his characterization. In Alexander Payne’s “About Schmidt," he plays a man whose tamped-down disappointment meant that he had to pull the performance from deep inside; he committed to the part without the help of his sidekick persona. In “The Departed" he’s playing bigger and badder than life with engines roaring. It’s a loud, showy performance. Frank even comes equipped with a trove of gaudy accouterments: a goatee like an arrow, a leopard-print robe, a bevy of babes, a severed hand and a ridiculous fake phallus. Another actor might wear these accessories; Mr. Nicholson upstages them.

Nicholson is often hilarious here, but I would have liked to see him mute the wackiness a little in the interest of the movie's overall tone. The cutesy last shot, which I'll leave as a surprise for the viewer, seems complicit with the jokiness of Nicholson's performance, and it does a disservice to the seriousness (not to mention gruesome violence) of much of what's gone before. Though "The Departed" has flourishes of black comedy throughout, it's not "Prizzi's Honor"; it's a truly dark movie in which many people die horribly, and ending on a goofy visual pun makes fools of the audience for caring.