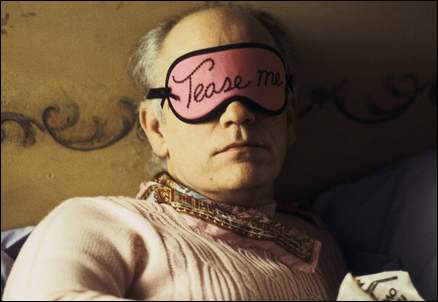 My review of "Color Me Kubrick" at RogerEbert.com and in the Chicago Sun-Times:

John Malkovich is a terrible Stanley Kubrick. In "Color Me Kubrick" he plays the director of "Dr. Strangelove," "2001: A Space Odyssey," "A Clockwork Orange," "Spartacus" and "Judgment at Nuremberg" as a multiple-car collision of Peter Sellers' Inspector Clouseau, Miss Kirk Douglas, Quentin Crisp and Tony Soprano. Sometimes all in the same scene.

What, you say? Kubrick didn't direct "Judgment at Nuremberg"? Well, right you are, and Malkovich isn't playing Stanley Kubrick, the renowned film director. In "Color Me Kubrick," billed as a "true-ish story," Malkovich plays Alan Conway, the fittingly named con artist who improbably impersonated Kubrick -- well, not so much impersonated him as simply claimed to be him -- around London during the making of "Eyes Wide Shut."

The movie is structured as an episodic farce and a showcase for bad acting. As the cons get increasingly outlandish, so does Malkovich's Conway's Kubrick, who tries on more accents than all the characters in all of Stanley Kubrick's films put together, and gets them all wrong, too. He name-drops incessantly, and insists on referring to the star of "Paths of Glory" and "Spartacus" as "Miss Kirk Douglas," and the star of "Eyes Wide Shut" as "Little Tommy Cruise."