John Malkovich is a terrible Stanley Kubrick. In "Color Me Kubrick" he plays the director of "Dr. Strangelove," "2001: A Space Odyssey," "A Clockwork Orange," "Spartacus" and "Judgment at Nuremberg" as a multiple-car collision of Peter Sellers' Inspector Clouseau, Miss Kirk Douglas, Quentin Crisp and Tony Soprano. Sometimes all in the same scene.

What, you say? Kubrick didn't direct "Judgment at Nuremberg"? Well, right you are, and Malkovich isn't playing Stanley Kubrick, the renowned film director. In "Color Me Kubrick," billed as a "true-ish story," Malkovich plays Alan Conway, the fittingly named con artist who improbably impersonated Kubrick -- well, not so much impersonated him as simply claimed to be him -- around London during the making of "Eyes Wide Shut."

The movie is structured as an episodic farce and a showcase for bad acting. As the cons get increasingly outlandish, so does Malkovich's Conway's Kubrick, who tries on more accents than all the characters in all of Stanley Kubrick's films put together, and gets them all wrong, too. He name-drops incessantly, and insists on referring to the star of "Paths of Glory" and "Spartacus" as "Miss Kirk Douglas," and the star of "Eyes Wide Shut" as "Little Tommy Cruise."

The idea that anyone could sashay around town with such flamboyant silliness, in outfits that would make Stevie Nicks blush (head scarves, fingerless black lace gloves, brown and orange-striped drawstring pants, green socks with white polka dots), while claiming to be Stanley Kubrick, is patently ridiculous. And, yet, people did believe him. They wanted to believe him, and to feel that the great film director had taken a special interest in them: cab drivers, artists, investors, ambitious rockers, aging lounge singers ...

Even Frank Rich, the former theater critic of the New York Times, wanted to believe he had actually spoken with the director of "2001" and "Barry Lyndon". Rich wrote an article about meeting the gay imposter at a Joe Allen's restaurant in Covent Garden:

Then he was gone, leaving us to celebrate our chance encounter with the great man, a meeting as brief and disjointed as a dream. ...

" Kubrick is gay?" someone else asked, taking note of the director's entourage.

"Everyone always thought HAL the computer acted like a jealous gay lover in "2001," I said.

"And 'Full Metal Jacket' was full of homoeroticism," Larry said.

Some of the above dialogue is put into the mouths of other characters in "Color Me Kubrick," which was directed by the real Stanley Kubrick's longtime assistant director Brian Cook, and written by Kubrick's researcher Anthony Frewin -- based on the research Frewin did on Conway at the real Kubrick's behest, when stories about the imposter started getting around.

Though Conway was a lousy impersonator (somehow able to count on his marks' unfamiliarity with the likeness of famous director), he was a fairly savvy con man -- gaining people's confidence by appearing to let them in on little "secrets" about himself. His victims would feel privileged that he felt comfortable enough with them to be so openly gay (something unknown to the general public -- mostly because Kubrick himself wasn't), or that he would invite them into his tiny, overdecorated and underwhelming private flat, which he pretended was his clandestine city hideout, a place to cogitate on pending projects, away from all the trappings and distractions of being a world-famous filmmaker.

And, of course, he would ultimately persuade them to offer to do him favors -- a little money, a meal, a few drinks, a sexual liaison -- by pretending to find them and their work fascinating, and envisioning a fantastic personal and professional partnership ahead. Whether it's an aspiring fashion designer or a heavy metal band, his prey invariably has just exactly what he's been seeking for his next film.

"Color Me Kubrick" is a little bit like a coloring book -- flip the pages and each is pretty much like the one before, escalating variations on the same scam, with Malkovich filling in the cartoonish shadings, and occasionally going way outside the lines. It's an entertaining diversion on a rainy afternoon, but not something you're likely to still be thinking about a week from Thursday. 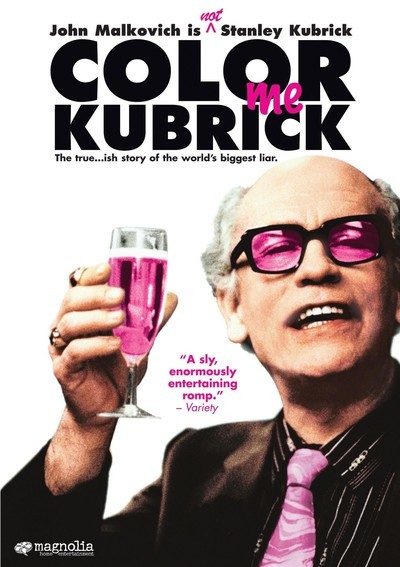