Write When You Get Work

Jonny Collins (Finn Wittrock) and Ruth Duffy (Rachel Keller), who grew up in some unnamed outer borough of Manhattan, were high school sweethearts, although "sweet" isn't exactly the right word, as seen in the prologue of Stacy Cochran's "Write When You Get Work." Shown in an opening montage, their romance is mostly outdoor sex (dogged by cops) and shoplifting, a lot of laughing and sneaking around. When she steals a pregnancy test from a local convenience store, he loiters outside, waiting for her. Nine years later, the two have long parted ways. Unraveling what happened to them—and their baby—is the background noise of "Write When You Get Work," Cochran's first film in 18 years (since "Drop Back Ten" in 2000). There are some interesting things going on, and some insight into New York's economic hierarchy, but the film veers off into a hard-to-believe crime heist, and, ultimately, none of it really hangs together.

When we pick up with Jonny and Ruth after the prologue, he's still living the same aimless life he was as a teenager, always on the lookout for some big score, never able to keep a job. He's a natural criminal. It's hard to picture him not taking advantage of people and situations. Ruth, meanwhile, has left her old neighborhood, and works as "interim" head of admissions at a tony private school in Manhattan. She has not revealed to her employers her working-class background, or her past convictions for breaking and entering. "Write When You Get Work" is filled with people who are up to no good and who should never be trusted, not with secrets, not with your life savings, not with 10 bucks. Ruth tries to go straight, live quietly, with a clean slate. All of that changes when she runs into Jonny at a funeral of a beloved baseball coach from high school. Jonny insinuates himself back into her life (by breaking into her apartment). He's got an idea for a big score, maybe through targeting one of the more vulnerable parents whose kids go to Ruth's school.

Enter Nan Noble (Emily Mortimer), a rich woman whose husband is under investigation for sketchy business practices. Jonny begins a campaign to infiltrate Nan's world, ignoring Ruth's panicked attempts at intervention. If you think about Jonny's plan for more than two seconds, it makes no sense whatsoever. Why exactly Nan is a good target is also not clear, nor is the insanely elaborate heist set up in the second half of the film. There's a double-cross, which then triple-crosses, and there may even be a quadruple cross in there somewhere. I lost track.

Finn Wittrock is very good as the charming amoral Jonny. Wittrock has been typecast early on as a good-looking prep school kid, but he's chosen very interesting projects thus far ("The Normal Heart," "The Big Short," "La La Land"). In Barry Jenkins' "If Beale Street Could Talk," opening in December, he plays a character who could not be more different than Jonny, and yet he is completely believable in both. As Jonny, he's a guy who's gotten by on his wheedling smile and good looks. Watch how he doesn't take "No" for an answer, ever, from his friends, his boss, from Ruth, from Nan. He's like an octopus squeezing through a tiny space. Open the door to him a sliver, and he takes over the whole room. Mortimer, a jangly mess of nerves and irritation, plays so compellingly terrible a character—filled with the self-pitying rage of the rich—that she is the most watchable thing in the movie. Nan is not a stereotype.

"Write When You Get Work" is a visual feast, shot by the frequent Paul Thomas Anderson collaborator Robert Elswit ("Boogie Nights," "Magnolia," "Punch-Drunk Love," "There Will Be Blood," "Inherent Vice"). He also shot "Nightcrawler," a masterpiece of moody urban cinematography. In "Write When You Get Work," Elswit captures New York's mercurial personality, how it changes in different lights, be it harsh morning light or the monochromatic blues of dusk. Sometimes the streets feel expansive, sometimes they feel desolate and empty. It's a great-looking film, entrenched in a specific sense of place.

The gap between the haves and have-nots has always been huge in New York, and "Write When You Get Work" makes it palpable, with Ruth answering a snooty person's question "Where are you from?" with the vague, "Close to here. Near the water." These moments in "Write When You Get Work," and there are many, feel very real. The characters commute into Manhattan from Staten Island, Brooklyn, the Bronx, to wait tables, open doors for millionaires, check the coats of supermodels who don't tip. These people are invisible to someone like Nan Noble, who expresses open dismay at the thought of the school allowing in scholarship kids (meaning black and brown kids). She doesn't try to put a nice face on her racism. She doesn't have to, because in her world everyone agrees with her. Unlike most of "Write When You Get Work," this aspect has a real electric charge. 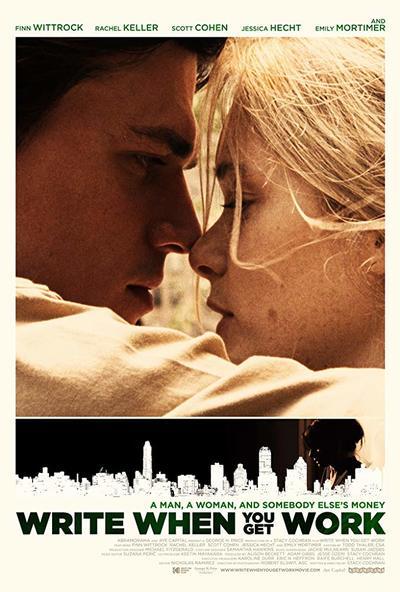