"Inherent Vice" is a film about a stoner which itself seems stoned. This is just one small part of what makes it distinctive.

Adapted from Thomas Pynchon's 2009 novel, the movie has been compared by many to the Coen brothers' "The Big Lebowski," a drug-fueled LA comedy with a similarly labyrinthian mystery (or "mystery") and some shared themes. But "Vice" is a richer, deeper, sweeter, equally funny movie. It owes a great deal to laid-back, character-and-atmosphere driven 1970s L.A. films such as "The Long Goodbye" and "Cisco Pike," but it never makes too big a deal of that lineage. As adapted and directed by Paul Thomas Anderson, it's a historical and political picture about The American Soul, though not too strenuously so. Mostly it's a long, shaggy, knockabout comedy about eccentrics who pursue their own appetites and manias and indulge their private demons while remaining oblivious to their effect on others. As such, it's a great people-watching film, showcasing a diverse cast whose performances are the acting equivalent of self-caricatures rendered under the influence: the line goes where it goes.

The phrase "Inherent Vice" refers to "the tendency in physical objects to deteriorate because of the fundamental instability of the components of which they are made, as opposed to deterioration caused by external forces"—a mouthful that refers simultaneously to the characters, their city, their nation, and the particular historical period that has defined all of it, and that is already passing into memory when "Inherent Vice" begins. (Exhales smoke rings.) It's set in Los Angeles circa 1970, after Tet and Altamont and Manson so many other time-and-place names that viewers of a certain age will recognize as markers of the point where '60s Utopianism morphed into '70s numbness. In his gonzo epic "Fear and Loathing in Las Vegas," Hunter S. Thompson referred to the Summer of Love in 1967 as, in retrospect, the point where the great wave of the counterculture "broke and finally rolled back."

The film's hero, the pothead private investigator Larry 'Doc' Sportello (Joaquin Phoenix), is standing on the beach waiting for the tide to return. He's a shaggy-haired, mutton-chopped man-child, a little bit piggish in the way that a lot of hippie guys were then, but basically decent; he wouldn't hurt a fly unless he thought the fly was bogarting his joint, maybe not even then. He blurts out sentences that are non-sequiturs to everyone but him, and makes high-pitched strangled sounds, a la Ben Braddock in "The Graduate," when he's frustrated. He's the kind of guy who might preface an important fact with "dig this," and who can say "right on" in response to any statement, varying the inflection so it always seems an acceptable answer. He solves cases intuitively, reading life as others might read tea leaves. The closeups of his detective's notepad reveal such phrases as "Paranoia alert" and "Something Spanish." It's a method, a process; it's his way, man. Yeah, fine, it doesn't often seem to yield visible results. But that's all part of it, you know? Because we're all too obsessed with results, with solving for "X," with explaining things and answering things. Right?

Oh—you want to know what the movie is about? Dig this: "Vice" is not the kind of movie whose plot you can flow-chart, or that will benefit terribly much from the inevitable click-baiting "explainer" pieces that are sure to be written about it in the coming months. The movie starts with Doc being visited by his ex-girlfriend Shasta Fay Hepworth (Katherine Waterston), now the girlfriend of local real estate bigwig Mickey Wolfmann (Eric Roberts). She wants Doc to thwart plans by Mickey's wife and her lover to have Mickey committed to a mental institution. Around the same time, coincidentally and strangely, a brother named Tariq Khalil (Michael Kenneth Williams, right on) visits Doc at his medical office (he's some kind of physician, seemingly?) and asking if Doc can help find one of Mickey's bodyguards, Glen Charlock, a white supremacist who did time with Tariq. Because Doc can't seem to walk down the street without being handed a case or a mission or asked for a favor, he also tries to locate the disappeared jazz saxophonist Coy Harlingen (Owen Wilson, who seems born to hold a sax, if not necessarily to play it) on behalf of Coy's wife Hope (Jena Malone).

Everything ties together, and yet it doesn't all tie together, or maybe "Vice" is one of those films where it kind of doesn't matter whether it ties together, and if so, to what degree; and it's fine, it's intentional, it's part of it, maybe. As I said up top, the film itself seems to be stoned, and to have trouble keeping track of itself. Images repeat, situations repeat. Sometimes the movie tells you things you already know, or refers to things it never mentioned before as if you're intimately familiar with them. It's all over the place.

There are long sections—notably Doc's encounter with coke-addled dentist Dr. Rudy Blatnoyd, played by Martin Short, who deserves a special Oscar for his slinky crab-walk—where the plot, such as it is, gets put on hold, so that the movie can luxuriate in people and places and vibes. Reese Witherspoon plays an assistant D.A. named Penny Kimball who disapproves of Doc on at least five levels but adores him and sometimes sleeps with him; with maybe thirty minutes to go, "Vice" takes time out to observe the two in a post-coital moment, Witherspoon lying on a bed, smoking a joint and laughing. The signature moment might be where Short's dentist asks Doc to please repeat where he told the secretary he was from, and Doc just stares and stares.

The movie is narrated in third person by Doc's associate Sortilège (Joanna Newsome), who I am about 90 percent certain is not a figment of anyone's imagination.

Anderson—who's become even more of an actors' director in his last few films than he was already—is at the peak of his powers here, ironically but appropriately directing "Vice" in such a way that phrases like "peak of his powers" (and other language connoting masculine swagger or preening mastery) seem contrary to the spirit of the thing. "Vice" impresses by seeming uninterested in impressing us. Anderson shoots moments as plainly as possible, staging whole scenes in unobtrusive long takes or tight closeups, letting faces, voices and subtle lighting touches do work that fifteen years ago he might've tried to accomplish with a virtuoso tracking shot that ended with the camera tilting or whirling or diving into a swimming pool. There's a long, teasing, frankly sexual scene that plays out for five or six minutes without a cut. There are entire scenes where one character walks into a room and starts talking to another character and the rest of the scene plays out alternating shots of the actors' faces (which seem to eschew makeup and draw attention to actors' freckles and moles and other "blemishes") and in cinematographer Robert Elswit's creamy '70s-style lighting. There's so much going on in those shots that you might not mind spending another ten minutes with those people, or an hour, or going for another drive with that dentist I mentioned earlier, whatever his name is.

Anderson's second and third features, "Boogie Nights" and "Magnolia," got compared to Robert Altman, but this one is way more Altman-y, if that's a word. It seems to be unfolding, as per a line in the novel and the script, on "Uranus, the planet of rude surprises." At times Anderson's script seems to have taken its cue from that film buff-beloved anecdote about the time Howard Hawks called Raymond Chandler while adapting Chandler's novel "The Big Sleep" to say that neither he nor any of the screenwriters could figure out who killed the Sternwoods' chauffeur, only to have Chandler admit that he didn't know, either. The Coen brothers obliquely allude to this anecdote near the end of their gangster picture "Miller's Crossing," when the hero asks the scheming accountant Bernie Birnbaum (John Turturro) who killed a third character, and Bernie replies "That was a mistake" but does not elaborate.

And, and, and: the whole time, Doc is followed and vexed by a right-wing, hippie-hating cop named Christian "Bigfoot" Bjornsen (Josh Brolin, whose beef-slab physique and woodblock head suggest that Nick Nolte and Kurt Russell somehow managed to have a son together). Like some other characters in "Vice," Bigfoot is an emblem of received Establishment values and handed-down "wisdom" about the proper way for 'Murricans to behave. ("Any gathering of three or more people constitutes a possible cult," he informs us.) But like Oliver Stone adapting the life of Richard Nixon and somehow ending up feeling for the guy, Anderson, who's never given any public indication of sharing Bigfoot's values, seems to treasure him as a human being, a lost soul.

Dig: there are moments wherein Bigfoot—who at every turn trashes Doc's body, property, feelings and values—seems to be in the grip of forces beyond his or anyone else's understanding (maybe like Jonathan Winters destroying that gas station in "It's a Mad, Mad, Mad, Mad World"). Something in the way Phoenix regards Brolin during these scenes suggest an addled yet fathomless empathy. They get each other. In its way, the relationship between the stoner "detective" who pretends to be a master crime fighter and the meathead cop who sometimes moonlights as an extra on "Dragnet" is the film's real great love story, an accidental metaphor for the liberal/conservative, dungarees/suits, blue state/red state divide that's defined U.S. politics since the Civil War. If you don't believe me, keep an eye out for the wordless scene where Doc watches Bigfoot absentmindedly fellate a frozen chocolate banana.

Beyond the goofy humor and loopy digressions is a tremendous feeling of yearning, of sadness over undefinable loss. The foggy sunlight that illuminates so many "Vice" scenes matches the fogginess of the hero's perceptions, which are rooted as much in nostalgia as in drugs (nostalgia is itself a kind of drug). Nearly every major character is haunted by roads not taken, or less traveled, by loves not pursued, days not seized. They wonder where the time went. They wonder what they're doing here. They just walk and talk, eat and screw and smoke, and the sun goes down and the tide goes out. What is there to life?

Beauty. So much beauty.

You can see it even in silliest images, such as the tableau of Wilson's Coy Harlingen taking part in a Last Supper-styled pizza dinner/photo shoot. You can see it in the momentous images, like the dusky opening shot of the sea as viewed from between two rickety houses. You can see it in a flashback of Doc and Shasta, done in a single long take: just a shot of them walking up and down a street past a chain link fence and huddling in a doorway while storm clouds gather and Neil Young plays on the soundtrack. The wave rolls out, the wave rolls in.

What were we talking about? 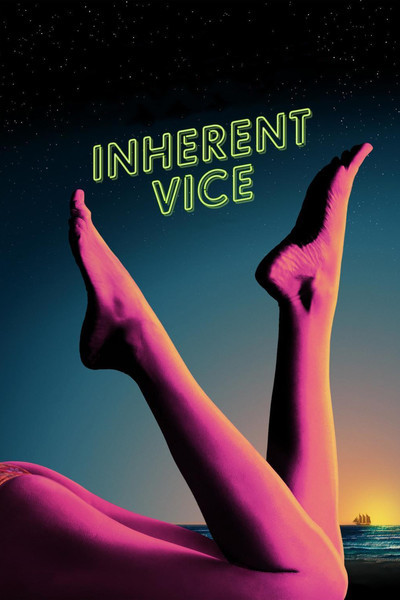 Rated R for drug use throughout, sexual content, graphic nudity, language and some violence