What She Said: The Art of Pauline Kael

Steven Spielberg sent a telegram to New Yorker film critic Pauline Kael to tell her that she was the only critic who understood "Jaws." George Roy Hill, furious about her review of "Butch Cassidy and the Sundance Kid" began his letter to her, "Listen, you miserable bitch." Ridley Scott was so shaken by a Kael comment he said he never read another review—from anyone. Marlene Dietrich wrote from Paris to make sure she could continue to get the New Yorker in France, telling Kael, "I am quite lost without your opinions on films."

From 1968-1991, Pauline Kael reviewed movies for the New Yorker, and her writing was an art form of its own, passionate, visceral, voracious, fearless, and utterly singular. She "brought a rare exhilaration to movies," one commenter explains in "What She Said: The Art of Pauline Kael," a biographical documentary/appreciation, from first-time feature writer/director Rob Garver.

Between sense and sensibility, Kael would always choose the latter. She engaged with film like "The Revenant"'s Leonardo DiCaprio engaged with the bear, as though she and the film were trying to rip each other apart. But she also engaged with it like DiCaprio and a horse in that film, ripping it open to huddle inside for warmth. The titles of her books about movies were overtly sexual: I Lost It at the Movies, Deeper Into Movies, Taking It All In.

Kael was among the first to treat films like Martin Scorsese's "Mean Streets," Brian de Palma's "Carrie" and "Dressed to Kill," Arthur Penn's "Bonnie and Clyde," and Bernardo Bertolucci’s "Last Tango in Paris" as fully-realized works of art, not just genre films. She was especially well matched for the movies of the 1970's, when a new group of brash, rule-breaking hotheads arrived in Hollywood, documented in Peter Biskind's excellent Easy Riders, Raging Bulls. She was ruthless about films that were adored by the intelligentsia like the Holocaust documentary "Shoah" and the European films she unforgettably classified as the "Come Dressed as the Sick Soul of Europe Party" movies. For her, while "La Dolce Vita," "La Notte," and "Last Year at Marienbad" were scathing attacks on a society that was self-indulgent, decadent, and shallow, those terms were equally applicable to the movies themselves. "Why should we care that they can't talk to each other if we don't know what they would say to each other if they could?"

Her work was refreshing in refusing to find a distinction between high and low art. She was equally refreshing, if sometimes frustrating, in refusing to make any effort at consistency or applying a standard set of criteria. She was scornful of the "auteur theory" proposed by Andrew Sarris, as described here by his widow, Molly Haskell, also a film critic and scholar. When Renata Adler, briefly a New York Times film critic did a take-down of Kael's work, meticulously documenting inconsistencies like she was filing a brief in appellate court, she failed to understand that, like Emerson, Kael thought foolish consistencies were the hobgoblins of little minds. Her only standard, and one she applied to every movie: don't bore me.

It is clear from the title that Garver sees Kael as as much of an artist as the filmmakers she wrote about. Her vivid and lively writing, narrated by Sarah Jessica Parker, is interspersed with archival footage of Kael herself and commentary from the usual group of colleagues and commentators, including her daughter, Gina James, and New York Magazine film critic David Edelstein, who insists that he was not a "Paulette" (a usually derisive term for the group of young film critics she mentored, helped get jobs, and then badgered to join her in supporting films she considered worthy). Instead, he says, he was a Paulinista.

The documentary is also interspersed with film clips, a few to illustrate selections from her reviews and commentary, like how the famous overhead shot in the Library of Congress from "All the President's Men" is used to illustrate a point about quantities of material. Maybe these clips are meant to convey the magic of cinema that so captivated Kael from the first film she saw, sitting on her parent's lap, but too often they are superfluous and distracting.

The documentary is most insightful when it identifies Kael's influences, strengths and weaknesses, the last including a failed attempt to be a filmmaker herself after Warren Beatty brought her to Hollywood. As a girl who grew up on a chicken farm in Petaluma, California, she was an outsider to the conventionally genteel world of New York magazine writing, inspired by the wisecracking, independent-minded heroines of the heroines of the 1930s movies she grew up watching. We see glimpses of notes from New Yorker editor William Shawn, deeply distressed over what today we might call graphic and explicit language. She probably tried that just to tweak the quiet, gentle man, but she was determined to "get away from term paper pomposity" and refuse any deference to authority, like the brash American New Wave filmmakers she championed.

What would Kael think of this film? Probably that it was too conventional, just a mix of talking heads and archival clips, and not as lively as her own prose. And some of its most interesting questions are raised only implicitly. What have we lost by replacing public intellectuals with reality show "celebrities" as influencers? And what does being a critic do to a person? James acknowledges without rancor that her mother "couldn't not be critical," and brought that kind of judgment to everything and everyone, not just films and filmmakers. "She turned lack of self-awareness into a triumph," says playwright John Guare. It was perhaps a strength as a critic and a weakness as a person that she never understood how painful her words could be. 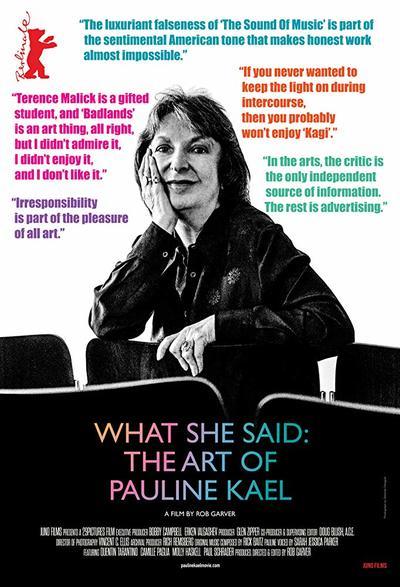 Pauline Kael as Herself (archive footage)

Quentin Tarantino as Himself

David O. Russell as Himself

Paul Schrader as Himself

John Boorman as Himself

Robert Towne as Himself

Joe Morgenstern as Himself

James Wolcott as Himself

Gina James as Herself

William Whitworth as Himself

Molly Haskell as Herself

David M. Edelstien as Himself

Stephanie Zacharek as Herself

Carrie Rickey as Herself

Philip Lopate as Himself

Camille Paglia as Herself