Something terrible must have happened to John Michael McDonagh, the screenwriter and director, after he made “Calvary.” That 2014 movie, a darkly comic murder mystery and a relentlessly but purposefully morbid exploration of mortality and faith, made me pretty eager to see whatever its creator had up his sleeve next. But this ostensible satire on American cops, crime movies, American values or lack thereof, intellectualism and anti-intellectualism, racism, and so on, is so hackneyed, tired, labored and overstuffed with contempt not only for all of its targets but also its own self that one gets the feeling that the talented Mr. McDonagh has gone mad with rage. Possibly during dealings with the American film industry.

Still, that’s no excuse for a movie that begins with a mime joke. Yeah, a mime joke. You just can’t get enough of those, can you? The film’s protagonists, Terry and Bob, played by Alexander Skarsgård and Michael Peña respectively, are police detectives in nice blue suits driving a cherry vintage American car and chasing a mime. Terry asks Bob if a mime will make a sound if you hit it with a car, so they’re that kind of cops. They find out, and to justify the gag, a bag of cocaine is found on the mime, who does make a sound and who also bleeds from the mouth after being hit with the car, which is undamaged.

In the early scenes of the film, McDonagh shoots a lot of bright flat, tableaus, and accompanies them with corny horns-blaring Cop TV Show music. One gets to suspecting that he’s going to cough up something like a feature-length version of the video for the Beastie Boys’ “Sabotage.” If only. The shooting style is meant to accentuate a certain absurdism: Terry and Bob are such awful cops that the crude jokes they make require a certain arty underpinning. Walking into the New Mexico police station where they work, they observe, “Look at all those fu**ing a**holes working”; “Suckers.” Terry has a thing for Glen Campbell. Bob and his wife enjoy trading literary aphorisms and debating their origins. After finding a guy who’s pegged to be the driver in an upcoming heist, Bob accepts that perp’s bribe of a flat-screen TV and an XBox; the next scene shows the TV mounted above another TV; on the bottom screen, his two kids, including one comically obese one, are playing video games, while on the screen above it, Bob is trying to watch “Out of Sight,” a film, he explains to his wife is by the “Jewish-American auteur” Steven Soderbergh. His wife corrects him: “He’s Swedish.”

Do you find any of this funny? Because there’s so much more of it. Here’s an exchange between the film’s villain, Lord James Mangan, and his fey henchman, Birdwell (Caleb Landry Jones, who clearly studied Gary Graham’s work in Paul Schrader’s “Hardcore,” as well as every homophobic stereotype in a ‘70s Ken Russell film):

“You know what the worst thing about jail is?” asks Lord James of Birdwell.

“You’re pretty quick for an American.”

Trying to get in on some heist action, the fellows inveigle an ex-con who’s converted to Islam (at one point he’s seen playing a doubles match of tennis with two women in burqas, ar ar ar, but it’s not a racist joke because the women are superior players, ar ar ar) and once the con (Malcolm Barrett, whose performance affords the movie its only measures of anything resembling fun) absconds with the money to Iceland, the movie’s plot complications turn more whimsical, necessarily.

But nothing here actually works, at least for any sustained amount of cinematic time. This is one of those movies in which the filmmaker has decided the fat jokes he’s putting in are, in fact, savage condemnations of fat jokes, but they’re really just fat jokes, and not very good ones at that. The Skarsgård character’s obsession with Glen Campbell is such a circa-1998-Tarantino-derivation that McDonagh, unless he’s completely brain-damaged, has to believe it’s a trans-dimensional meta lampoon of a Tarantino derivation, because there’d be no other reason to include it. AND YET, the way it actually plays is as a plain derivation. (The soundtrack also contains a Lee Hazelwood song and some other stuff that one of McDonagh’s assistants might have picked up for him on Record Store Day a couple years back.) Poor Tessa Thompson, of “Creed” and “Dear White People,” is here compelled to play a stripper who falls for Terry, and she’s depicted reading John Hersey’s “The Algiers Motel Incident,” just to show you that her character, and her character’s creator, are really above all this, which assertion begs certain questions.

Into the nothing-sacred dynamic, the movie eventually introduces a child pornography theme, which compels its wayward characters to do the right thing, or a right thing. Too little, too late. The Iceland-set scenes are very nice to look at though. 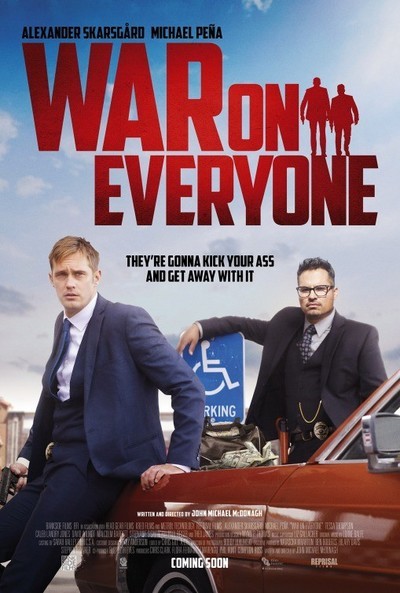 Rated R for violence, sexuality/nudity, drug use and pervasive language.