This review was originally published on October 17, 2014 and is being republished for Black Writers Week.

"Dear White People" made me think of an alternate title: "And That's Why They Call It Race." The negro and Caucasian Ivy League University students in Justin Simien's comedy are all competing to be the first and best across various societal finish lines, either to attain higher status or to solidify it and pass it on to one's offspring. From a certain vantage point, all this elite jockeying and politicking is exhausting to behold. Ivy League institutions are where many of America's leaders and innovators are farmed, but the process includes a certain amount of sandbox childishness. It's fortunate that, like "The Social Network," "Dear White People" is so charismatic in form and style that we easily forgive its surfeit of priviliged narcissists. And, while the tone here is broader and brassier than that of David Fincher and Aaron Sorkin's Harvard rhapsody, we eventually get to see much further beyond the surface of these calculating, thin-skinned brats, to an intensely sensitive and searching core. You can see it in the eyes of Tessa Thompson, who plays mulatto campus radical Samantha White with such implosive rage and heartache that her closeups feel like grand set pieces.

"Dear White People" gets incredible mileage out of Thompson's personaility (along with her dizzying beauty) and that of her co-star, Tyler James Williams ("Everybody Hates Chris"). Williams isn't the leading man, but he quietly leads the film. As oddly Afroed, gay Lionel, he plays a character we never see in movies, a shy, offbeat young Negro whose awkward social navigation invites as much sympathy and identification as laughs. Such a watchful, introspective character, when Caucasian, naturally assumes the role of Unlikely Hero. When Negro, he is either a non-entity or a joke. In "Dear White People," he simply stands for any Negro kid who finds himself adrift in a sea of cliques and types that reserve one predetermined slot for his kind. In a sweet little reverie, he imagines himself fitting in smoothly with the Caucasian kids and then with the Afrocentric crowd, his hairstyle and clothing changing to suit each reality. Yet neither are his reality.

There are no easy heroes or foils in this briskly cross-cutting ensemble piece, only blossoming adults and beleagured elders (including Dennis Haysbert, cast to type as a no-nonsense Dean of Students) responding to a unversity economic crisis by standing their ground and sharpening their knives. Austerity breeds contempt. Two big events bookend the power plays and betrayals in between: A student government election complicated by House Negro/Field Negro politics of a distant era; and a racist theme party hosted by the movie's fictional equivalent of the Harvard Lampoon. Along the margins, a reality TV producer pulls some marionette strings. This is Obama era satire, but, in his visual storytelling, Simien is not joking. He's not content to work from the stale but persistent improv-mockumentary template that's been the state of the art for a decade--where the handheld camera flops around with a lack of conviction and worldview to match a gang of (often Ivy educated) comedy writers just bobbing for laughs.

In contrast, Simien treats his own screenplay as if it were a slow-boiling neo-noir thriller, or, in its dapper sensuality, "8 1/2." You could make a (film geek) party game out of guessing his influences. There's the erudite-vernacular screwball dialogue of Wilder, Schulberg, Chayevsky and their funkiest disciple, Spike Lee (circa "He Got Game"-to-present). Certain Wellesian low angle shots of strident characters arrayed like superheroes of intolerance suggest "The Boondocks." There's also the brashness of very early Spike, particularly the campus cattiness of "School Daze" and the exuberant sexuality of "She's Gotta Have It"-through-"Jungle Fever." Lionel mentions his own love of Robert Altman films--perhaps shared by the director, though his canvas, full as it is, rarely gets Altman-messy. The dialogue is dense but rolls out as neatly as a "Dragnet" interrogation.

Whether Simien drew on all or none of these influences, his vision seems to spring directly from what's up with his generation now. A student election managed by one computer science major's smartphone app doesn't have an election day but an election minute. Apps, Tweets and YouTube channels round out this film's cast. They're as essential to the film's storytelling as phone booths and telegrams were back when Negro college students didn't exist in movies.

The pressure to make a mark in a fickle campus society composed of walking social media profiles, but without doing anything to disgrace the legacy they've been entrusted, ultimately pushes these kids to the breaking point. It all falls apart at the film's climactic party. Vulnerabilities and complexeties come to light. Characters we never expected to gain any self-awareness suddenly hit a brick wall of truth.

If it sounds like I'm talking around this film's supposed central subject, Race, I sho' is! This whole race thing is exhausting. Caucasians are generally as tired of hearing Negroes' race-based grievances as we Negroes are of being profiled, passed over for opportunities and murdered in the street with impunity. It's all so played out.

"Dear White People" agrees with me. It is as preposterously good-looking as its student government rivals and ex-lovers, Samantha  and Troy (Brandon P. Bell), but never so lovely as in those moments where characters, overcome with spontaneous emotion, set aside their spiritual placards to engage on a human level. When Samantha and her new boyfriend, a somewhat dorky, analytical Caucasian teaching assistant (Justin Dobies), argue volatile issues of race and representation in cinema while stepping out of their clothes to make sweet love, you might learn everything you ever wanted to know about race but were afraid to face. 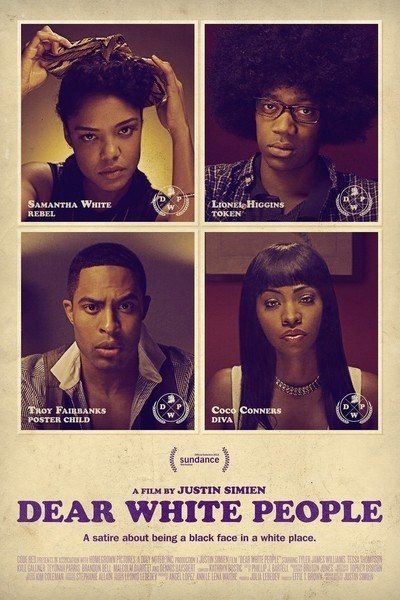