Watching “Ticket to Paradise,” one can’t help but think of the famous James Stewart line from 1940’s “The Philadelphia Story.” It goes, “The prettiest sight in this fine, pretty world is the privileged class enjoying its privileges.”

To be clear, the privileged class in Ol Parker’s frustratingly unexceptional rom-com doesn’t only consist of the story’s chief characters: successful architects, art dealers, and recent grads of a fancy college, with pockets deep enough to afford an extended luxury vacation in Bali. In this specific case, it also consists of two bona fide movie stars—George Clooney and Julia Roberts (you might have heard of them here and there)—having a ball with the well-earned privileges of their status as the-last-of-their-kind Hollywood superstars, while bickering their way through some bitter zingers and sarcastic gotchas.

In that regard, it certainly is a pretty sight, to witness two gorgeous, forever-charismatic silver screen royals unite against a breathtaking tropical backdrop (and in frothy promotional videos), with their gracefully aging visages front and center before the rest of us mortals. Sadly though, the loose link between “Ticket to Paradise” and George Cukor’s screwball classic stop right there, at that aforementioned quote. And you should blame it on a dispiriting script that relies too heavily on its A-list actors’ magnetic presence alone, instead of bothering with a good story that we can root for.

So let’s jump to another quote from another film. At this stage, imagine this die-hard romantic-comedy devotee, throwing her jazz hands in the air and yelling like the late William Hurt in “A History of Violence”: “How do you f**k that up?” Indeed, how on earth do the effortless charms of Roberts and Clooney not yield the kind of rom-com we used to routinely get in the ‘90s? The issue is the second romantic tale that unfolds around them, one that doesn’t hit a single believable note. It belongs to Lily (a delightful Kaitlyn Dever in an underwritten part), who is the abovesaid college graduate on her way to a Bali vacation, with her fun and sexually very active female sidekick, Wren (Billie Lourd), and an invitation to join a top-shelf law firm on her return.

Soon enough, Lily decides to get married to the handsome seaweed farmer Gede (Maxime Bouttier) she’s somehow rapidly fallen in love with, after the laziest meet-cute sequence imaginable. (It’s more appropriate to call that scene just plain meet and drop the cute entirely.) So instead of enjoying her time with Wren, having some wild nights out, and returning home for the bright future that awaits—you know, like any intelligent young woman of her caliber would do—Lily dedicates her entire being to Gede. There is of course nothing wrong with love at first sight in life or in movies, the kind that this critic is shamelessly in favor of, especially in cinematic contexts. But to make the massive life decision of marriage and deciding to stay in Bali for it on a whim? Even the rugged ice harvester Kristoff of “Frozen” laughed at this idea: “You mean to tell me you got engaged to someone you just met that day?” And that was a Disney movie in a 19th Century setting.

Objectively speaking, Lily doesn’t decide on the marriage that day exactly. But the film is so lacking in building the couple’s romance and chemistry that it feels like a same-day verdict. What co-writers Parker and Daniel Pipski instead do is use Lily’s storyline as an excuse to bring Clooney’s David and Roberts’ Georgia together, Lily’s parents and each other’s exes that hate one another. But the duty calls and the duo embarks on a mission to Bali to end this ridiculous fling as a pair of responsible parents.

In fairness, “Ticket to Paradise” earns some goodwill during the David-Georgia scenes and gives the two some sharp moments of squabble, several of which the film’s trailer unfortunately spoils. But the ex-couple’s sexual tension and natural ease at hating each other earn the admission price, even when the momentary bliss we feel in their presence fades away with Lily and Gede reappearing frequently and a present-day romantic interest of Georgia (played by Lucas Bravo) taking up too much time. It would have been one thing if “Ticket to Paradise” spent some real time thinking through the young fiancés, helping us understand what makes them interesting and right for each other. But in the aftermath, you’ll be shocked at how little you’ll learn about either, apart from their vast affection for the locale they often call beautiful. Well, of course, it is beautiful because what we see is mostly a luxury resort, a fact that makes the “I understand why she likes it here” quote from the parents painfully funny when they show empathy towards Lily’s decision to stay. Doesn’t everyone like a luxury resort?

We do get to see some things outside of the resort, like the lovely grounds of Gede’s supportive family and a pair of touristic sites. But “Ticket to Paradise” seems oddly disinterested in any family dynamics or anything that has to do with Bali, save for a couple of nuptial traditions cartoonishly represented. In the world of this film, everything is background noise and an item on a list of excuses to bring George and Julia together. The saddest casualty of this disposition is Wren. But with her P.J. Soles vibes, Billie Lourd still runs with it enchantingly, committing the cardinal sin of being far more memorable than the bride herself. Perhaps in revenge, the film periodically forgets about her existence.

Bless the old-school stars Roberts and Clooney for elevating this lackluster mélange and in certain instances, even making you forget about the non-sensical film that surrounds them. But that’s hardly enough, especially if you are hoping for a homecoming for the rom-coms of yore. 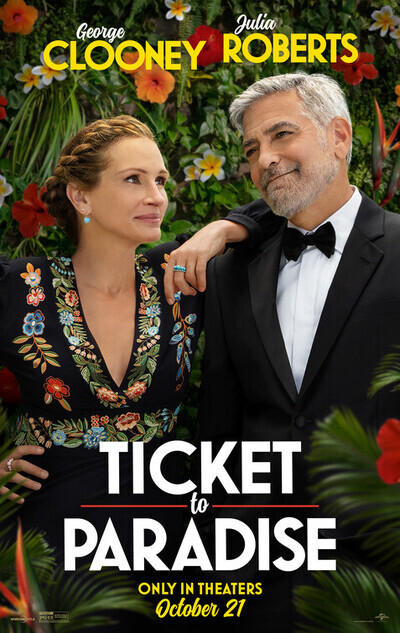 Rated PG-13 for some strong language and brief suggestive material.