The War with Grandpa

What were these people thinking?

That’s the question I asked myself over and over again while watching “The War with Grandpa,” a straining comedy featuring the wildly overqualified Robert De Niro, Uma Thurman, Christopher Walken, Cheech Marin and Jane Seymour. No one needs a paycheck this badly. This goes far beyond the one-for-me, one-for-them theory of role choices.

And yet, here they are alongside Oakes Fegley and Rob Riggle in a family-friendly movie that would seem merely benign and forgettable under ordinary circumstances. During our current state of chaos and claustrophobia, however, its central conflict feels beyond archaic and teeters on tone deaf. So you’ve got a giant house in a leafy suburb with an attic and a basement, providing plenty of space for a mom, dad, three kids and a grandpa to live comfortably? Only the surly tween boy doesn’t want to give up his room for the clan’s sweetly aging patriarch, so he stages an all-out war to make him miserable and force him out? Boo freaking hoo.

Yes, I realize “The War with Grandpa” is based on the decades-old children’s book by Robert Kimmel Smith. And, of course, production on director Tim Hill’s film occurred way before the pandemic turned the world upside down. But rather than serving as a pleasant escape during these uncertain times, “The War with Grandpa” is a frustrating reminder of what normal life used to be like (crowded classrooms, birthday parties) as well as an extended, whiny screed about extreme first-world problems.

Fegley stars as Pete, the middle child in a happy family who’s starting middle school with his loyal group of pals. But when it becomes clear that his grandfather, Ed (De Niro), is having trouble functioning in the world on his own, Pete’s mom, Sally (Thurman), suggests that the widower come live with them rather than placing him in a retirement home. In the script from Tom J. Astle and Matt Ember, Ed’s debilitation reveals itself in the kind of reductive characterization we too often see in films: He can’t figure out the self-checkout at the grocery store, he knocks over the mailbox while backing out of the driveway, he doesn’t know how to read the news on an iPad and he still has a flip phone, so he can’t summon a Lyft car if he runs into trouble. These are all legitimate concerns that the movie plays for cheap laughs. (At least we’re spared the obligatory Viagra joke. “The War With Grandpa” is rated PG, after all.)

But Grandpa moving in means Pete must move out, from his beloved corner bedroom to the attic upstairs, which is spacious but might already be the home to bats and mice. Pretty much immediately, his friends suggest that he play a bunch of tricks on Ed to make his life hell, starting with a declaration of war. This high-concept premise might have landed a bit more effectively if Hill had let the tension build a bit, if he’d established that this living arrangement is simply untenable through steadily increasing anger and humor and let the antics run wild from there. Instead, Pete’s primary attack comes too soon, is unprovoked and makes him seem like a petulant brat rather than a regular kid we can relate to and root for. (My own son, who’s almost 11 and squarely within the target audience, found the character annoying and declared this one of the worst movies he’s ever seen—and he’s seen “Playing With Fire” and “UglyDolls.”)

From here, “The War With Grandpa” ramps up with sub-Fockers levels of sabotage and one-upmanship. The increasingly damaging pranks involve a drone, fake shaving cream, a broken record player and a shattered jar of marbles (which is a long way to go for a punchline about how Grandpa has lost his marbles). In no time, the back-and-forth turns legitimately dangerous, with Pete placing a snake in Ed’s bed and intentionally triggering the life alert button he wears around his neck, drawing emergency personnel for a false alarm. (We never do see the consequences for that move.) But beyond the fact that many of these gags are painfully wacky and predictable, including a trampoline dodgeball showdown that plays out exactly as you’d expect, there’s a meanness to “The War With Grandpa” that’s at odds with its fundamental feel-good message. The film as a whole isn’t weird enough to earn the darker places it goes, and so it occupies a bland and mushy middle ground instead.

Meanwhile, Walken, Marin, and Seymour get little to do besides make the occasional wisecrack and chime in on Ed’s next steps as his supportive group of friends. Thurman’s chief characteristic as mom to Pete and his sisters (Laura Marano and Poppy Gagnon) is that she’s always running late. Riggle is repeatedly emasculated throughout the film, either through a repeated joke about how he needs his wife’s permission to use a chainsaw or with De Niro dropping his towel in front of Riggle in another deeply unfunny moment. And Ed, whose presence is the driving force behind the action, seems like too nice of a guy to get caught up in all this mayhem. The fact that he allows this war to escalate the way it does makes absolutely no sense. “Dirty Grandpa,” this is not, but that other De Niro comedy looks a whole lot better now by comparison. 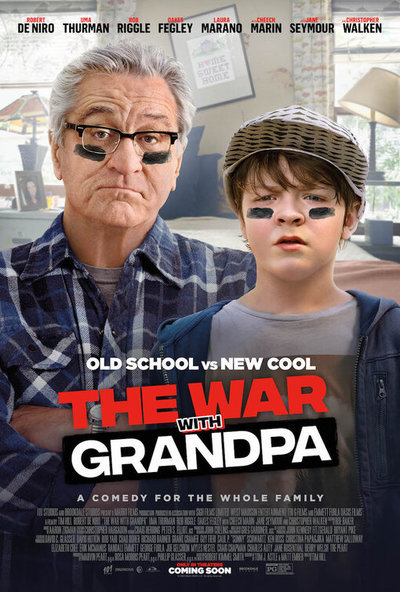 Rated PG for rude humor, language, and some thematic elements.