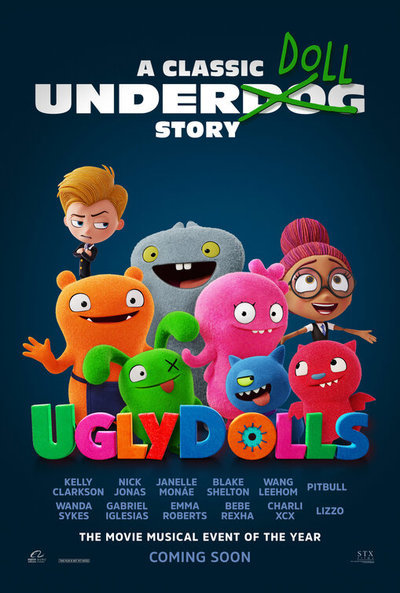 Writer (based on characters by)

"UglyDolls" is less a movie than an infomercial for the plush Hasbro toys designed to be “ugly” in a commercially cute, lovable way. Unfortunately, the script is not particularly cute or lovable, just a muddled story with lukewarm musical numbers that takes pieces from better films like “Toy Story,” “Monsters Inc.,” “The LEGO Movie,” “Smallfoot,” “Trolls,” and all those other stories about how we should appreciate our own kinds of beauty and the individuality of those around us. It’s not bad. It’s just not very good.

Moxy (Kelly Clarkson) is a sunny character who wakes up each morning hoping that this is the day her dream will come true and she can be loved by a child. She's a resident of Uglyville, where the friendly residents live in a cheery world stitched together from scraps and cardboard.

The benevolent mayor is Ox (Blake Shelton), who asks Lucky (Leehom Wang) to try to persuade Moxy that Uglyville is the only place there is so she can stop dreaming of “a child for every doll and a doll for every child.” But we know there is another place, because earlier we see a factory where imperfect toys are snatched off the conveyer belt so that only those that match the same identical template are given to children.

A new arrival shoots out of a portal into Uglyville (Emma Roberts as Wedgehead). If someone can arrive, there has to be a somewhere to arrive from, and maybe that portal goes both ways. Moxy and her friends cross over and find a place where a handsome singing idol named Lou (Nick Jonas) presides over “the gauntlet.” It is a special kind of perfection boot camp that subjects the dolls to a rigorous series of tests.

The participants introduce themselves, one a lawyer and model, one an engineer and model, and so on, all dressed in prep school plaid. Lou tells the dolls that “if you want someone to love you, you’ve got to look like me … kids just don’t want ugly.”

Lou pretends to offer help to Moxy and her Ugly friends survive the gauntlet. He asks one of the “perfect” dolls, Mandy (Janelle Monaé), to be their guide and take them to a place he has selected for them to stay in. Mandy takes them past the row of immaculate, identically (and boringly) symmetrical houses to a shabby shed, which the Uglies immediately love. Just to hammer a bit harder on the theme, they see the items stored as junk to be treasures. Mandy, who has been hiding her glasses from Lou so she won’t seem less than perfect, begins to appreciate the warmth and optimism of the Uglies.

“Perfect” here means more than to be without flaws or differences; it also means being free of “the three s's": stains, smudges, and smells. In Lou’s world, the kinds of wear and tear that come from playing or, really, any interaction, result in the most severe punishment: the washing machine.

As Moxy and her friends experience the bigger world, Lou sends three conventionally pretty but mean girl dolls to investigate Uglyville. They spend most of their time simpering about their crushes on Lou and making cutting remarks. It turns out that dolls who look “perfect” can be arrogant and selfish. And we learn that the upper-case "U" Ugly story has a lower-case "u" ugly history.

Like the dolls themselves, the movie is supposed to be concerned with kindness, but its appreciation of individual differences is regrettably superficial and cookie-cutter. Even worse, the voice talent is cast more for singing than creating distinctive characterizations, and while the songs are well-produced and performed, they're forgettable because they hardly move the story along. The always-welcome Wanda Sykes is here oddly relegated to a one-note role as a “can’t we just all stay home,” apron-clad, UglyDoll version of Betty Crocker.

"Uglydolls" struggles to sustain, much less promote, its message about how we should love to get messy and how our flaws make us who we are. The movie's conclusion seems to grossly suggest that children can only appreciate the dolls who share their imperfections, making it clear that some flaws, like this script, can and should be fixed.