The Belgian fraternal filmmaking duo of Jean-Pierre and Luc Dardenne have been celebrated throughout the world as being among the most humane artists working in the cinema today. With “Two Days, One Night” (2014), they added a new ingredient to their basic narrative formula by having their central character played by a world-famous movie star, the great Marion Cotillard. Some of their more dedicated admirers may have looked at this development as a sellout move on their part but even though the film as a whole lacked the power of a masterwork like their wrenching 1999 drama “Rosetta,” that was due less to the presence of Cotillard, who proved to be a surprisingly good fit, and more with a certain sense of contrivance that had crept into their storytelling. That problem crops up again in their latest film, “The Unknown Girl,” an odd fusion of an earnest socially conscious drama and a B-movie mystery programmer that never quite comes together despite a strong performance from Adele Haenel at its center.

Haenel plays Jenny Davin, a young doctor working in a free clinic in a working-class neighborhood. As the film opens, she has just landed a coveted position at a large and prosperous medical facility that will essentially make her career. At the end of one of her final shifts at the clinic, she and her intern (Olivier Bonnaud) are closing up shop when yet another patient arrives after business hours and begins frantically hitting the buzzer. The intern wants to let her in but Jenny refuses to do so—she tells him that he cannot allow himself to be overworked by patients by seeing them after work hours but in reality, she just wants to get out of there at last and begin her new life. That one moment of cold callousness ends up backfiring horribly when a young immigrant prostitute is found dead from a blow to the head and a look at the clinic’s security tapes reveals that the girl, whose identity is a mystery to the police investigating the crime, was the same one who had been trying to get buzzed in that night.

Jenny is devastated by this news and wracked with guilt over how her brief moment of thoughtlessness may have helped contribute to the girl’s death. Determined to atone for her actions, she decides to spurn her new job and stay on at the clinic. Then, worried that the police investigation may not go anywhere, Jenny decides to begin her own amateur investigation into the case by using her position to quietly suss out useful information from her patients in the hopes of discovering the identity of the girl and uncovering her killer. Slowly but surely, she begins to piece together key bits of information but at the same time, she also begins to attract the attentions of certain people who would prefer that she not continue her investigation and will go to great lengths to try and stop her.

One of the things that made the previous films of the Dardennes so impressive was that they clearly came from a unique dramatic sensibility that set them apart from others—their stories may have contained elements of melodrama but they approached them in such a distinct and low-key manner that they made viewers feel as if they were watching real people going through the paces of their lives instead of just a mere movie, even during their collaboration with Cotillard. With “The Unknown Girl,” on the other hand, we are always aware of the fact that we are watching a movie and not an especially distinguished one at that. Although there are moments in which we see Jenny interacting with some patients that harken back to previous efforts that put their emphasis on character and behavior, too much of this film is driven exclusively by the machinations of the plot, a problem in this case because said machinations just are not all that interesting. The mystery aspect, for example, is somewhat undercut by the fact that her amateur investigation turns up one key lead after another at a rate that eventually begins to defy plausibility after a while.

What does work quite well, however, is the performance from Adele Haenel as Jenny. The Dardennes have shown a strong facility for telling female-driven stories with powerhouse performances at their center—besides the aforementioned turn by Cotillard in “Two Days, One Night,” there was also the stunning debut by the then-unknown Emilie Duquenne in “Rosetta”—and Haenel, who has worked with the likes of Andre Techine and Guy Maddin and who provides one of the most striking scenes in the controversial urban terrorism drama “Nocturama,” lives up to the high water mark set by those previous collaborations. Jenny is a character that could have easily devolved into some kind of bleeding-heart caricature but Haenel fleshes her out in smart and interesting ways that helps to drive the film along even when the screenplay refuses to follow suit. To whatever degree that this film succeeds, it is due almost entirely to her efforts and hopefully the higher international profile that working with the Dardennes generates will help to supercharge her career.

Because the Dardennes have made so many good and worthy films over the years and because their work is governed by equal amounts of raw filmmaking talent and sincerity, there is the temptation to give “The Unknown Girl” a bit of a pass for just being a single blip in an otherwise exemplary filmography. I myself went back and gave the film a second look in the hopes that the issues I had with the storytelling could be set aside and that a more profound driving concern would finally reveal itself. Alas, aside from getting another chance to marvel at Haenel’s work, the second look did not offer any such revelations. Instead, I found myself once again realizing that this is the first film of theirs that theoretically could have been made by any number of other filmmakers without much change in the end result, a notion that would have once been considered absolutely unthinkable. 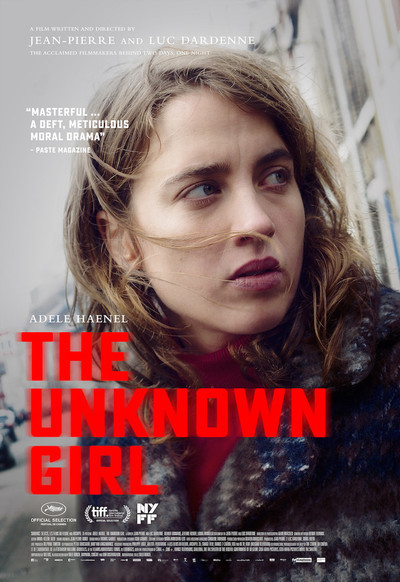