With narrative echoes of “Sucker Punch” and stylistic commonalities with “Sin City,” one would expect John Suits’ “The Scribbler,” adapted by graphic novelist Dan Schaffer, to at least be a bit of escapist fun. A female empowerment, mental illness-defeating, noir-esque comic book movie with B-movie Goddesses like Gina Gershon, Sasha Grey and Eliza Dushku? Where do I buy tickets? And yet “The Scribbler” never clicks into the escapist mind f**k it really needed to be to work. It can't maintain its style and never finds its substance. It’s a ridiculous narrative with scenery-chewing performances, but it doesn’t have the form to match. It’s dull when one wants it to be ludicrous, and serves as a reminder of how hard it is to bring comic books to celluloid life on a limited budget.

Suki (Katie Cassidy) has multiple personalities, one of which is the title character. Her Doctor (Billy Campbell) has developed a technique known as “The Siamese Burn,” which is essentially a massive shock to the system designed to destroy the extraneous personalities one at a time. But which ones are extraneous? And what will she do when she’s down to two? Questions like these linger in the background of what is also a poorly-written mystery. The “Burn” subplot is actually part of a flashback conveyed through an investigation by two police officers (Eliza Dushku, Michael Imperioli) into why all of Suki’s fellow inhabitants of Juniper Tower happen to be showing up dead. The Tower is a halfway house for the “mentally and socially inept,” which allows for a cavalcade of odd characters, including a bunny ear-wearing Sasha Grey, milk bath-taking Gina Gershon, disturbing Michelle Trachtenberg, scene-stealing Garret Dillahunt and a girl who just walks around naked (Ashlynn Yennie). One by one, most of these characters jump from Juniper Tower, leading one to wonder if “The Scribbler” doesn’t have echoes of “Identity” as well and these people are all just dying personalities of the film’s protagonist.

The best moments of “The Scribbler” embrace the film’s ridiculous concept with overheated dialogue pulled from the noir/action comic book manual. “Why don’t you tell me what happened, from the beginning?” “That’s not always the best way to tell a story.” Those lines early in Schaffer’s film sets it up as a work that will navigate the traditional storytelling structure in a unique manner, but “The Scribbler” ends up depressingly linear. And most of the subtext—the burning out of personalities could clearly be read a commentary on control of female individuality and sexuality—is underdeveloped to the extreme. “The Scribbler” feels like an outline of a better film.

There are times when one can see what “The Scribbler” could have become. Garret Dillahunt, so great on “Deadwood” and “Raising Hope,” is having a blast as the one guy in Juniper Tower, who “checked the wrong box.” He even gets a slo-mo sex scene with Cassidy that kind of needs to be seen to be believed. I wanted more of that kind of insanity instead of the drab, episodic pacing of a film that feels way longer than its 88 minutes. It’s ugly when it should be crazy. Someone burned all the personality out of it. 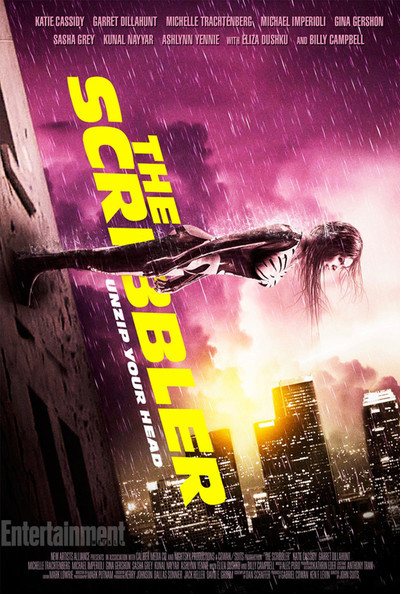 Rated R for violent images, some strong sexuality/nudity, and language