The Happiest Day in the Life of Olli Maki

And all these similarities notwithstanding, “The Happiest Day in the Life of Olli Mäki,” a Finnish film that’s the debut feature from director Juho Kuosmanen, is the antithesis of “Raging Bull.” Perhaps all the similarities are there to underscore that point. Because Olli Mäki, the real-life boxer on whose biggest match this movie is based, is the antithesis of Jake LaMotta, the real-life basis of “Raging Bull.” Olli, a compact lightweight boxer played by the appealing Jarkko Lahti, is not a fellow prone to violence, battling inner demons and sexual jealousy. As his manager and hypeman Elis contends, he’s a simple baker from Kokkola who’s going to put Finland on the map by fighting the American featherweight Davey Moore, who’s coming to Helsinki for the bout.

But in the weeks prior to the big match, Olli finds himself strangely distracted. The movie opens with him driving his steadily dysfunctional little automobile to his girlfriend’s place, only to learn that their date that night is to attend a wedding, for which he’s not dressed. To top off the harriedness, his car breaks down for good. So Olli balances his sweet, pretty girlfriend Raija (Oona Airola) on the handlebars of a bicycle and off they go. The long, steady shot of the couple calmly gliding down the road has a lyricism that’s the basis of the movie’s rhythm.

Not all is placid for so long. Olli then makes his way for Helsinki, with Raija in tow. Manager Elis is putting them up in his place—they have to sleep in the bunk beds that usually belong to his kids. The big money and accommodations of boxing have not yet come to Helsinki, it seems. Elis was once a boxer himself, and he’s constantly trying to sell Olli on the glamour that accrues to a champion, swearing to his acolyte that the day Elli won a particular championship was “the happiest day of my life.”

But Elis is not an ideal mentor. He has set up Olli in any number of sponsorship schemes, and is constantly insisting the socially ill-at-ease and naïve boxer perform like a trained monkey at photo shoots and dinners. There’s also the matter of weight, which Olli tries to explain to a friend in one of the movie’s funniest scenes. Olli is most comfortable as a lightweight, but Elis, in order to get the bout with Moore, has ordered Olli to trim down to featherweight, which Olli is hard-pressed to do. Not least because of the epiphany that hits him like a thunderbolt during a press conference at which he can’t stop looking at Raija smiling at him from the back of the room. He is truly in love, he decides then. And he makes the mistake of confiding to Elis about it.

Resentment and backbiting ensue. Raija is compelled to take a train back to Kokkola, and Elis is revealed to be spending money on promoting the match far faster than he can accrue actual revenue from it, compelling HIS wife to kick him out of the house. A scene in which Elis has to beg a consortium of promoters for expense money as his kids wait in the car in a torrential downpour, and then one of said kids wanders into the building because he needs a bathroom, is one of the movie’s most cringeworthy hilarious set pieces. It all builds up to the title event, a day that is the happiest not because of the outcome of the fight.

This movie won an award in the Un Certain Regard section of Cannes last year, and was also Finland’s entry for consideration for a 2016 Academy Award. For all that, I should warn some readers that this is a movie that’s laid back to what many would consider a fault. Its portrayal of Olli Mäki’s ordinary-guyness risks making him ordinary to the point of invisibility. The movie doesn’t hammer too hard on its ostensible theme that what one may be good at doesn’t always define what one is. In this case, Olli is a reasonably skilled boxer whose temperament is antithetical to what one needs to be a great boxer. Which is not brutishness but single-mindedness. Lacking that single-mindedness with respect to boxing, Olli concludes that all he needs is love. A lesson for our time? I can only hope. 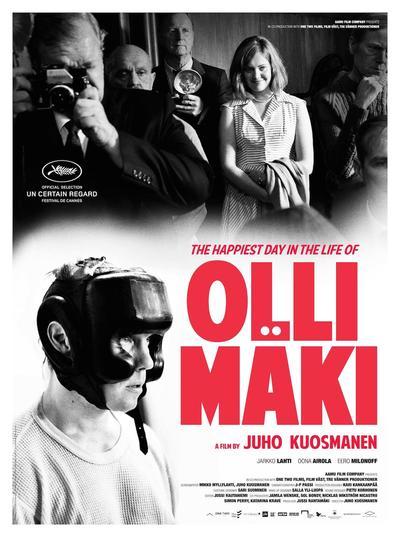