In a 2019 interview with Charente Libre, Wes Anderson said that his new movie, "The French Dispatch" was "not easy to explain." He's right, it's not, and any explanation would deconstruct it in a way to make it sound even more incomprehensible. It's like taking apart a clock to see how it works, and in so doing you no longer know what time it is. A clock is an apt metaphor for Anderson's style, present in all of his movies, but to an extreme degree here. Made up of a dizzying array of whirring intersecting teeny tiny parts, "The French Dispatch" ticks forward relentlessly, never stopping to breathe, barely pausing for reflection. "The French Dispatch" lacks some of the more endearing qualities of his earlier features—the prep school shenanigans of "Rushmore," the intimate family dynamic of "The Royal Tenenbaums" and "The Darjeeling Limited," or the kid-centered "Moonrise Kingdom." By contrast, "The French Dispatch" holds the audience at a remove, and is a stronger film for it. Watching Anderson follow his obsession to the outer limits (it's hard to imagine how much further he could go) is fascinating. The movie may be hard to explain, but it's very fun to watch. It's a fast-paced delirious movie about a very slow unchanging world.

In "The French Dispatch," the object of Anderson's obsession ("object" is a key word) is The New Yorker, specifically The New Yorker in the time of finicky founder/editor Harold Ross, and his daunting roster of writers—James Thurber, A.J. Liebling, Joseph Mitchell, Rosamond Bernier, James Baldwin—all of whom were given enormous leeway in terms of subject matter and process, but edited within an inch of their lives to align their prose with the aggressive New Yorker house style.

The fictionalized New Yorker is called The French Dispatch, published out of a little French town called Ennui-sur-Blasé, although it started in Liberty, Kansas, where editor Arthur Howitzer, Jr. (Bill Murray) was born and raised. (In one of the many "A-ha" moments of trivia sprinkled throughout: the magazine was originally called Picnic. Playwright William Inge, most famous for his 1953 play Picnic, was born in Independence, Kansas. Liberty, Independence, get it? None of this means anything, but it's fun if you pick up on it.) Howitzer is surrounded by a loyal staff overseeing a collective of eccentric writers, all busy at work completing pieces for the upcoming issue. "The French Dispatch" doesn't delve into these characters' lives but instead focuses on their work, and the movie's structure is that of an issue of the magazine, where you literally step into the pages, and "read" three separate stories. But first, there is the Jacques-Tati-style opening sequence, clearly a riff on The New Yorker staple, "The Talk of the Town," with Herbsaint Sazerac (Owen Wilson, jaunty in a black beret and turtleneck) bicycling through Ennui-sur-Blasé, showing us the sights (and speaking directly to the camera, causing some unfortunate collisions).

The first magazine story centers on Moses Rosenthaler (Benicio Del Toro), a genius artist serving a life sentence for homicide, and engaged in a love affair with Simone (Léa Seydoux), his muse, promoter, and prison guard. Adrien Brody plays Julian Cadazio, Moses' representation in the hifalutin' art world, wheeling and dealing to get Moses' work out there. The second story is a whimsical pantomime of the 1968 student protests in Paris, presented in Godardian pastiche, with Timothée Chalamet as Zeffirelli, a moody revolutionary (is there any other kind?), and Frances McDormand as Lucinda Krementz, the French Dispatch writer whose objectivity is compromised when she inserts herself into the story. (This section is clearly inspired by Mavis Gallant's 1968 coverage of the protests for The New Yorker, "The Events in May: A Paris Notebook".) The final story shows the attempt by writer Roebuck Wright (Jeffrey Wright)—a mashup of James Baldwin and A.J. Liebling (with a little M.F.K. Fisher thrown in)—to profile a legendary chef named Nescaffier (Steve Park), who works his magic in the police department kitchen. Each story is told with its own style, with Anderson utilizing animation, graphics, still lifes, visual puns, and gags, all held together by the thread of Alexandre Desplat's score, and Anderson's single-minded sense of mission.

Very few filmmakers have as distinct a fingerprint as Wes Anderson. (There's an entire book called Accidentally Wes Anderson, made up of photographs from around the world of buildings and landscapes that look like Anderson shots.) There are two things that obsess him: objects and nostalgia. Prosaic everyday objects transform in the context of Anderson's miniaturized diorama world. He views objects the way the artist Joseph Cornell viewed them. Cornell was an obsessive collector of what was deemed "junk" (marbles, old maps, tiny glass jars), junk which turned into magical talismans when placed in his now-world-famous boxes. Cornell's fetishism is apparent in his work, making it all slightly unnerving in really beautiful ways. There's a fine line between obsession and fetishism, but in art that fine line doesn't much matter. Anderson's objects glow from his detailed attention: he cares about each and every one of them. A line from The Picture of Dorian Gray comes to mind: "It is only shallow people who do not judge by appearances. The true mystery of the world is the visible, not the invisible." Anderson perceives the mystery in the visible.

Anderson's obsession with objects has to do with his other obsession of nostalgia. Nostalgia is universal, but it is also tricky. What one person yearns for in the past may be someone else's nightmare (and vice versa). In a cliched film, nostalgia expresses itself in a golden glow (assumed to be universal). Anderson's nostalgia isn't like that. His is extremely specific. There's a reason some people find his work alienating. You're in the presence of a true obsessive, that's why. For example, if you don't yearn to live inside J.D. Salinger's Franny and Zooey, then you won't easily enter into Anderson's dreamspace. The same is true of "The French Dispatch." What is most interesting about this, though, is that Anderson is nostalgic for things that pre-date his own life. He is nostalgic for fictional worlds, for objects now considered obsolete, for rhythms of a long-ago time he didn't even experience. This is not to say his nostalgia is not personal. It is. Another quote, this time from Nancy Lemann's eccentric novel The Fiery Pantheon: "She had a nostalgia for a life she had never lived."

This is not so much what "The French Dispatch" is about, as what it made me think about. It's strange that such a crowded, dazzling, visually-insistent film leaves so much space for free association, but it does. Now that's endearing. 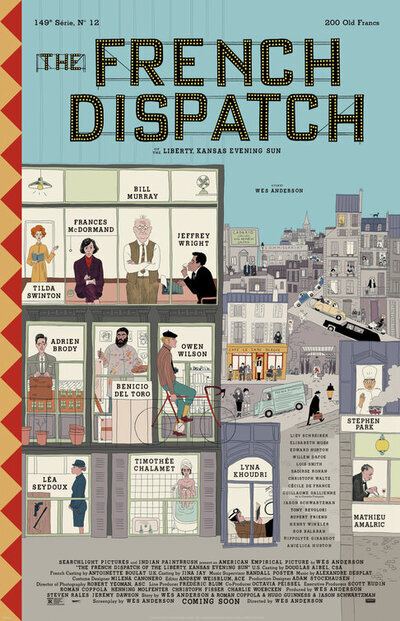 Rated R for graphic nudity, some sexual references and language.

Edward Norton as The Chauffeur

Willem Dafoe as Albert 'The Abacus'

Cécile De France as Mrs. B

Guillaume Gallienne as Mr. B

Anjelica Huston as The Narrator (voice)