If Merchant Ivory and Paul Verhoeven ever gave birth to a movie baby, it would probably come out looking something like “The Exception.” This tony drawing-room period piece, anchored by Christopher Plummer’s wily take on an aging German monarch who longs for the past and abhors the present, is served with a side of steamy interludes of sex-laced intrigue. Yes, the narrative is occasionally clunky and there is often more tell than show. But a strong ensemble offers compensation.

David Leveaux, a noted British stage director, wisely chose a tightly focused story as his feature debut, one that takes place at a single scenic locale—an isolated countryside mansion located in the Netherlands. Based on The Kaiser’s Last Kiss, a 2003 fictionalized historical novel about Kaiser Wilhelm II’s waning days in exile, the drama opens in 1940 as Hitler is busy invading European countries. A young German officer named Capt. Brandt (Jai Courtney, in a part that is an upgrade from the “Divergent” series and “Terminator Genisys”), injured in battle and with an elaborate scar to prove it, is recruited as a bodyguard to the Kaiser while gathering evidence of the dethroned ruler’s lack of loyalty.

Yes, a Nazi is our hero and rooting for him might prove a challenge. But Brandt also is sensitive enough to be haunted every night by the nightmarish images of a mass killing he recently witnessed that targeted women and children in Poland, so there is that.

Soon after his arrival, a new hire in the form of a comely young maid enters his chambers and he quickly issues a command: “Take off your clothes.” She duly follows orders. You might not recognize Lily James as the dark-haired Mieke. That’s because the last time you probably saw her was as Disney’s live-action and very blonde Cinderella, a role that required her only to lose a shoe. In a welcome gender-switch in the art of seduction, the next time her servant girl and Brandt have a hot-and-heavy encounter—a household no-no—she is the one who demands that he doffs his duds before forcefully pushing him onto the bed and taking charge of the boudoir situation.

After Mieke confesses to her undercover lover that she is Jewish, it becomes clear she is a spy for the Dutch resistance, one that Brandt is tasked with pursuing. Her mere presence has already caused the Kaiser’s cunning wife, Princess Hermine (Janet McTeer), to be suspicious especially after she stumbles upon the maid and the captain engaged in a late-night rendezvous. It also doesn’t help that Mieke has caught the eye of her husband, winning him over by sweetly helping him feed his ducks.

Plummer’s deposed monarch, whose withered left arm doesn’t stop him from chopping wood or lighting cigarettes, actually roots for this taboo twosome. And because he cares about their fate, we do, too. This Von Trapp family patriarch is more handsome than ever at 87, and he towers over the proceedings as a bellicose character who has no filter when it comes to criticizing Nazis in public while hoping to reclaim his seat of power in Berlin. The real Wilhelm II apparently was nobody’s idea of a charmer, but Plummer gets away with suggesting he was.

Matters come to a head when it is announced that the monstrous Nazi official Heinrich Himmler is paying a visit, allowing the Kaiser to believe his regal status will soon be restored. That doesn’t stop him from bellowing, “Better start counting the silver,” however. Marvelous British character actor Eddie Marsan (the boxing brother on “Ray Donovan”) does a bang-up job of sending a much-needed chill up the spine of the film with his insidiously subtle portrait of Himmler as a rodent-snouted personification of evil incarnate. His casual dinner-table discussion about exterminating disabled children with a deadly shot of fenolin into their hearts proves quite the appetite killer and a sign that his intentions are not on the up and up. Eventually, the plot is tangled in shootouts and a car chase with the Kaiser, Mieke and Brandt joining forces.

One major peeve: The accents spoken by various cast members are all over the place. Then again, when Courtney and James strip down, words are unnecessary. Would I rather be watching Verhoeven’s “Black Book” or Merchant Ivory’s “The Remains of the Day”? Of course. But for Plummer’s plum of a performance alone, you might want to make an exception for “The Exception.” 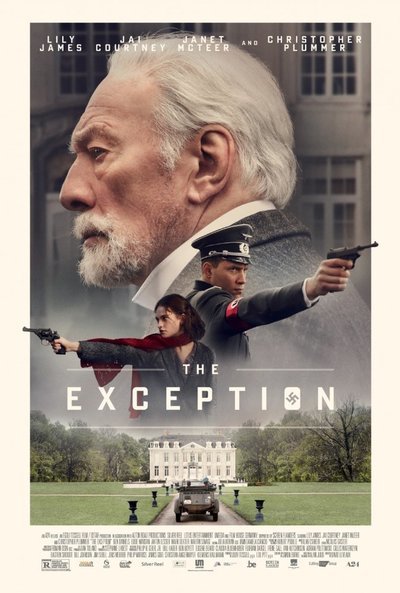 Writer (based on the novel "The Kaiser's Last Kiss" by)