The highlight of "The Circle" is producer-costar Tom Hanks' performance as the CEO of the titular company, a Google- or Apple-styled high-tech octopus that's spreading its tentacles into every nook of our lives. The brilliance of Hanks' performance as Eamon Bailey, founder of The Circle, is that it's not remarkably different from the humble, charming average guy performance he gives as himself whenever he goes on talk shows, accepts awards, or narrates a documentary about the unsung heroes of World War II. For whatever reason, you can't help trusting Tom Hanks. That's why "The Simpsons Movie" cast him in a voice cameo selling "The New Grand Canyon," a name for the hole that would have been left in the ground if the military went through with its plan to bomb the recently contaminated town of Springfield into oblivion. "Hello, I'm Tom Hanks," he says. "The US government has lost its credibility, so it's borrowing some of mine."

The notion that Tom Hanks, a patriotic emblem right up there with apple pie and the American flag, would be hired to put a smiley face on an American Hiroshima is scarier than a lot of current horror films. You just know that if he ever used his considerable influence for evil rather than good, almost no one would resist him, and the handful that warned against him would not be believed. And yet Hanks has never played a straight-up bad guy who chills you to the bone whenever he shows up onscreen. The closest he's gotten to that sort of character was in "The Road to Perdition," where he played a mob hitman who was more of a morose antihero than a bad guy, and the "The Ladykillers," a slapstick comedy that cast him as an obnoxious, bumbling Satan with a Foghorn Leghorn accent. His performance in "The Circle" as Evil Tom Hanks is the best thing in the picture.

That isn't saying much. James Ponsoldt's film based on Dave Eggers' same-titled 2013 book has a lot of good ideas and a few engrossing sequences, but it never quite finds a groove, or even a mode, and it ends in an abrupt, unsatisfying way. Emma Watson stars as Mae Holland, a young woman who gets a job at The Circle, a cult-like corporation based in the Bay Area that has a campus with man-made lakes and a sky filled with buzzing drones.

You probably have a good idea of where this story is going even if you've never read Eggers' book or seen an anti-tech warning tale before. Mae is handpicked by Eamon and his right-hand man, company co-founder Tom Stenton (Patton Oswalt), to take part in an experiment to glorify a new tiny camera they've invented. She'll wear cameras on herself and plant them all over her apartment and in other significant locations of her life and embrace the idea of "total transparency" hyped by her boss. "Transparency" and "integration" and other multi-syllable words get tossed around a lot by guys like Eamon, who are really interested in getting access to our data so they can monitor our lives, sell us new products, and resell our information to third parties. "The Circle" gets this and uses it to generate low-level paranoia in every scene, and amps it up whenever Eamon strides onstage to give one of his TED-talk styled addresses to the company or to unveil a groundbreaking new product (such as the tiny spherical cameras that Eamon distributes all over the world, giving the resultant Orwellian surveillance network a granola-crunching progressive label: SeeChange).

The problem is, "The Circle" never finds a good way to escalate its paranoia in anything other than a tedious, obvious way. And the meat-and-potatoes manner in which Ponsoldt has adapted and directed this material reveals the limits of his talent. A mad visionary stylist who paints with light and sound might've made a memorable film out of this story, but that's not the kind of director Ponsoldt is. He thrives in a low-key mode, telling stories of ordinary people interacting in ordinary spaces; "Off the Black," "Smashed" and especially "The Spectacular Now" were about as good as intimate character-driven indies could be, and "The End of the Tour" had its moments, too. There's a Hanks-like decency to the way he looks at human beings.

But this story doesn't have many recognizable human beings in it. They're mostly plot functions with names. Watson's character is The Heroine, really more of a Gullible Ingenue. Glenne Headley and the late Bill Paxton are The Parents (Paxton shakes visibly because his character has multiple sclerosis). Hanks is the Villain, even though he doesn't play him that way, and Oswalt's character is the Scary Right Hand Man, sizing up Mae and pushing her back onto the beaten path whenever she's about to stray. Ellar Coltrane of "Boyhood" plays her ex-boyfriend Mercer, who warns her that The Circle is evil and that she's selling her privacy and her soul. Karen Gillan is The Friend who hires Mae to work for The Circle, only to become jealous and irritated when the founder selects Mae as the company's poster girl, then worried when the extent of Eamon's exploitation becomes apparent.

What I'm describing here is the cast of a horror movie that traffics in archetypal situations, one in which the characters don't have to be plausible human beings to rivet our attention and merit our sympathy. David Cronenberg and David Lynch, both of whom might've done a brilliant job with this same material, are aces at making films fueled by dream logic and filled with archetypal characters and images. (Just imagine what either of them could do with Oswalt, a reliably excellent comic character actor who unexpectedly radiates power and menace here.) Ponsoldt does not appear, on the basis of this film, to be that sort of director, and that sort of director is what "The Circle" needed. This movie might represent the least sensible match of filmmaker and material since Sidney Lumet adapted "The Wiz."

As you watch the film, the subdued performances, realistic-looking locations and active-but-not-baroque camerawork make you expect a more realistic film about tech, along the lines of "The Social Network" or "Steve Jobs." When the story turns into something akin to a nightmarish cousin of "The Truman Show" or "Network," or the kid sister of Cronenbeg's "ExistenZ," you want it to get bigger, wilder, more outrageous, more frightening, and it's too nice and reasonable and conscientious to do that. The result feels undernourished in just about every way, although Hanks's performance, John Boyega's brief role as a founding programmer, and a couple of frightening action sequences break through the tedium. This is one of those movies that has nothing and everything wrong with it. It's frustrating in a singular way. 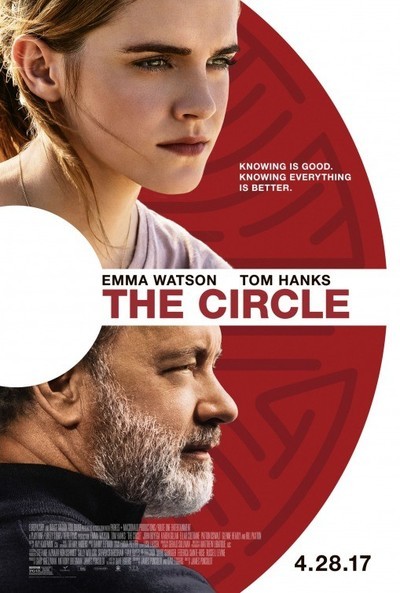 Rated PG-13 for a sexual situation, brief strong language and some thematic elements including drug use.