The second the credits started rolling at the end of “Steve Jobs,” I reached into my purse and did what so many other people in the theater did: I turned on my iPhone. Currently, I’m writing this review on my MacBook Pro. Later this afternoon, once I’ve brought my six-year-old son home from school, I’ll try to deflect his demands to play “Angry Birds Star Wars” on the iPad. So yes, Steve Jobs has changed my life just as he’s changed many millions of others’ on the planet. The devices he devised do what he hoped they would do: They make our lives easier. They are aesthetically appealing. They are our friends.

Danny Boyle’s thrilling film, which takes place behind the scenes at three key product launches during the late Jobs’ career, begins with the Apple co-founder freaking out minutes before introducing the Macintosh in 1984 because his team couldn’t get it to say “hello.” It was nitpicky and obsessive—qualities he was famous for—but he was also onto something, as we now know: this idea of technology serving as a constant and comforting companion.

All of which makes the fact that he was so coldly dismissive to the real-life people closest to him—the people who actually loved him—such a fascinating contradiction, one of many that Boyle, writer Aaron Sorkin and star Michael Fassbender explore with great ambition and élan.

He insisted on micromanaging the tiniest details of his presentations—making sure the console was a perfect black cube, down to the millimeter, at the 1988 launch of his failed company, NeXT, or cajoling underlings to ignore fire code by shutting off the exit signs in the theater in hopes of achieving a dramatic darkness for his unveilings. But he couldn’t control who was going to come at him in the moments before he took the stage, or what they would say, or what they would want, or how they would dare to invade his formidable brain to wreak havoc when all he wanted to do was maintain his carefully crafted façade of Zen cool.

They include Apple co-founder and old friend Steve Wozniak (played with great intelligence and pathos by Seth Rogen); Apple CEO John Sculley (Jeff Daniels), the one-time father figure who would gain infamy for eventually firing Jobs; and Chrisann Brennan (Katherine Waterston), Jobs’ ex-girlfriend and the mother of his daughter, Lisa, whom he long refused to acknowledge as his or support financially. (All three actresses playing Lisa at various ages give smart, distinctive performances, by the way—Makenzie Moss at 5, Ripley Sobo at 9 and Perla Haney-Jardine at 19.)

And of course, there is Fassbender himself, who doesn’t really resemble Jobs in any physical way but rather embodies his drive, his restlessness. Fassbender has never shied away from playing damaged or difficult characters—“Shame,” “12 Years a Slave,” even the “X-Men” prequels as a young Magneto—but here, he has the added challenge of playing a revered, real-life figure over the span of 14 years, from long hair and bow tie to glasses and dad jeans. He never flinches from the arrogant and repulsive elements of this man’s behavior, but there’s an intensity to his presence and a directness in his eyes that make him not just compelling but commanding. He doesn’t care whether you like him, and that’s exciting.

Through it all is Kate Winslet as Joanna Hoffman, Jobs’ calm yet forceful right-hand woman and a much-needed voice of reason. Winslet gets a couple of great speeches, which she delivers with convincing power, totally unsurprisingly. Her exchanges with Fassbender are the film’s high points and almost a high-wire act; it’s a tricky thing making such dense dialogue sound effortless, but both actors pull it off.

This a super-Sorkiny Aaron Sorkin script—full of the kind of well-timed zingers and clever turns of phrase that never occur to us in real life. Rogen gets the best line of all toward the end, one he levels at Jobs in a crowded auditorium before the 1998 iMac launch: “You can be decent and gifted at the same time. It’s not binary.” With self-conscious beauty and piercing insight, it’s a notion that defines the entire film.

The energy is relentless and the actors all more than meet the challenge of not only keeping up with Sorkin’s trademark, rat-a-tat patter but also making it sing. But because the movie takes place almost entirely within interiors, the non-stop walking-and-talking—back and forth through hallways, up and down stairways and in and out of doorways—almost plays like a parody of Sorkin’s style, the kind of thing we saw when “The West Wing” was at its peak.

Thanks to Boyle’s typically kinetic direction, “Steve Jobs” is certainly never boring. It rarely takes a breath and is crammed with high-tech jargon, but it never feels bogged down. Corridors come to life with imagery. Moments from the past crosscut seamlessly and inform the present, often with overlapping dialogue. And the glare of the lights and thunder of the crowds can be so all encompassing, they make you feel like you were there, too: on the precipice of the future.

And that’s sort of a fascinating contradiction in itself: that a movie about a guy who was obsessed with sleekness and simplicity should be bursting with verbiage and verve.

Having said that, if you don’t know a whole lot about Steve Jobs going into “Steve Jobs,” “Steve Jobs” isn’t about to go out of its way to help you. If you don’t know about the garage in Los Altos, CA where it all began, or his lengthy and tangled friendship with Wozniak, the potential for exploring the complexities of Jobs’ personality might be lost on you. An excellent companion piece would be Alex Gibney’s recent documentary, “Steve Jobs: The Man in the Machine,” which covers much of the same ground, but more thoroughly. (You’re welcome to ignore the 2013 biopic “Jobs” starring Ashton Kutcher, if you haven’t already. But it is rather telling that Jobs’ life has inspired three separate features in just a couple of years.)

Sorkin’s script is bold in choosing these pivotal moments in Jobs’ career and structuring them as a three-act play. Certainly it’s far preferable to the standard, superficial, cradle-to-the-grave biopic that tries to encompass too much. It’s easy to imagine “Steve Jobs” as a stage production, actually, for its theatrical talkiness and the minimalism of its set design.

It’s also easy to compare Sorkin’s portrayal of Jobs in “Steve Jobs” to his portrayal of Mark Zuckerberg in “The Social Network,” which earned him the adapted-screenplay Oscar in 2011. Both men are visionary geniuses who revolutionized the way people connect with each other, even though they are more than a little socially challenged when it comes to the people in their own lives. The irony may be too rich, but it’s delicious—even though the men in question can be so vicious that their actions leave a bad taste in your mouth.

The fact that he doesn’t try to redeem these flawed, fascinating figures—or even try to make you like them in the slightest way—feels like an innovation in itself. 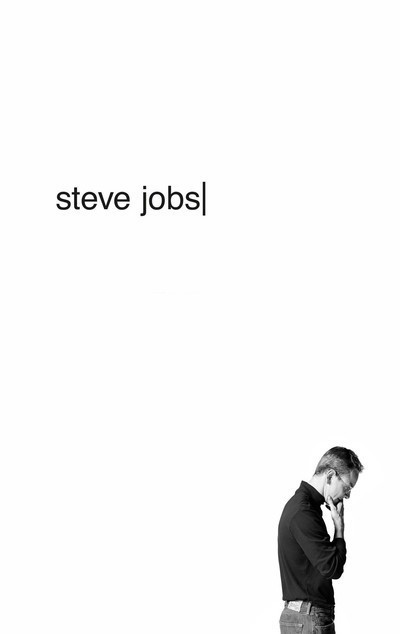