The End of the Tour

Directed by James Ponsoldt ("The Spectacular Now"), "The End of the Tour" might fit well on a double bill with "Amadeus," another film about a genius and a lesser artist who basks in his aura. Of course, the setting is very different, and the stakes are much lower—"Tour" is a fictionalized account of the week-and-a-half that Rolling Stone writer David Lipsky spent following the late David Foster Wallace as he toured to promote his doorstop-sized masterpiece "Infinite Jest"—but it's still the story of a competent but unremarkable creative person observing brilliance up close, feeding on it, reveling in it and resenting it.

It is also certainly one of cinema's finest explorations of an incredibly specific dynamic—that of the cultural giant and the reporter who fantasizes about one day being as great as his subject, and in the same field. What it definitely isn't is a biography of David Foster Wallace, much less a celebration of his work and worldview. Whether that proves a deal breaker, a bonus, or a non-factor for viewers will depend on what they want out of this movie.

"The End of the Tour" is not really about Wallace (Jason Segel), although he's the other major character. It starts with Lipsky (Jesse Eisenberg) expressing amazement (but really jealousy) over a rave review of "Infinite Jest" in New York magazine, a moment that sparks his obsession with Wallace. It ultimately leaves us thinking about Lipsky's feelings and career trajectory, and whether he feels any guilt about using his brief association with Wallace to further his own career as a writer of books. At this point in his life, Lipsky has had just one volume published, a novel that few people bought and fewer read; after some hesitation, he foists it on Wallace while visiting him at the University of Illinois during a punishingly icy winter.

The screenplay by Donald Margulies spends most of its time and energy observing a dance. One dancer is Lipsky. He only got Rolling Stone to pay for his rock-star style profile of a novelist by agreeing to ask Wallace about the rumors that he uses heroin, and his motivations for doing the story are, to put it mildly, less than noble. The other dancer is Wallace. His fiction and nonfiction were partly concerned with the meaning of the word "authenticity," and how the social rituals and technology and economic structure of modern life created false intimacies that Wallace was determined to reject.

Theirs is a complex relationship, brief as it is. The most fascinating thing about it is how each side of it seems to be happening in a different storytelling genre.

Wallace's side of the story is something along the lines of a light drama, perhaps even a romance, about somebody who's been burned over and over and has withdrawn from nearly all relationships save for a handful that he feels he can trust and believe in. Although the small part of the world that cares about writers' private lives thinks of Wallace as a bit of a recluse and perhaps a bit mysterious, it's immediately clear that he's just selective and self-protecting. It's the story of a man learning to trust again (in a love story, it would be "to love again") while worrying that he's going to get burned one more time. Lipsky isn't a Wallace-level intellect, he is very smart, and a good listener, and excellent at getting subjects to open up, even though his demeanor is presumptuous. He doesn't approach Wallace with the appropriate  humility. He instead comes at him from the point-of-view of a writer who believes that he is Wallace's potential equal—somebody as profound as Wallace but not as accomplished or famous, for now. Wallace seems to buy this. Why? Maybe because he's a teacher, and at least a few of his students have real talent, and he doesn't want his ego or insecurity to rule out the possibility that he might cross paths with an artist. Or maybe he's just a decent, optimistic guy.

Lipsky's side of the story often feels like the story of of a con man, or a regular person who uses other people without realizing that's what he's doing. If this were a romantic drama, Lipsky might be a drug user who swears he's gotten clean, or a recovering alcoholic who's not as far along in the process as he claims to be, or a serial cheater who wants everyone to think he's reformed and can be monogamous even though he's constitutionally incapable of that. We keep waiting for the other shoe to drop—for Wallace, who genuinely likes Lipsky even though he's observant enough to spot all the warning signs immediately, to realize that Lipsky cannot have a real friendship with him, and that in general it is a bad idea for a subject to think that he can have that kind of relationship with a reporter.

Any journalist who's been profiling famous people for any length of time will recognize the dynamic depicted here by Ponsoldt, Eisenberg and Jason Segel, and the honest ones will be made uncomfortable by it. There is something vampiric about features like the one that Lipsky has been assigned to write. There are also elements of theatricality. As Wallace observes early on, the subject is expected to give a performance of sorts, imitating the person he'd like to be perceived as being. The reporter in turn playacts casual curiosity, and tries to push past the facade and find something real, maybe uncomfortable, best of all revelatory.

Segel and Eisenberg, who as movie stars have been in Wallace's position many times, have an intuitive understanding of how this relationship works, and they illuminate it in the moment, with specificity and clarity. Segel doesn't really look or sound like Wallace (not that that matters; Anthony Hopkins didn't look or sound like Nixon in "Nixon" but was extraordinary) and I didn't necessarily buy him as somebody who could write like Wallace, but he's so smart and genuine and peculiar that we believe he is capable of Wallace's extreme sensitivity and delicate observations—a major accomplishment. Eisenberg is the true star of the movie—an actor of extraordinary originality and also bravery, insofar as he never seems to trouble himself with whether people will hate his characters. He's a great listener but also a rather scary one. His characters often seem to be scrutinizing other characters the way a snake might scrutinize a field mouse. There are many moments in "The End of the Tour" when we dislike Lipsky. There are a few moments where we might find him sickening.

Is this a story that will fascinate an audience beyond editors, critics, reporters, novelists, and people who care about the problems of such people? I have no idea, though it seems unlikely; the film's incredible specificity would seem to mitigate against being discovered and championed by a wide audience, despite Segel and Eisenberg's presence in the cast. Did the film necessarily need to have David Foster Wallace as one of its two main characters? That's a thornier question. We rarely hear any of his prose read aloud (Lipsky reads a passage of "Jest" to his girlfriend, but that's about it) and there is nothing in the film besides some of Wallace's dialogue to indicate that the movie has any interest in illuminating Wallace's fiction, or the obsessions that he worked into them.

It is very much an Amadeus and Salieri story, and if you are familiar with Amadeus, and the barest outlines of Wallace's life, and the fact that this is based on a nonfiction book by the writer David Lipsky, you know how the story must end: with Lipsky gaining a greater measure of fame via his brief association with Wallace and not being quite sure how to feel about it. The best thing you could say about "The End of the Tour" is that it could've been about any two creative people. That's also the worst thing you could say about it. 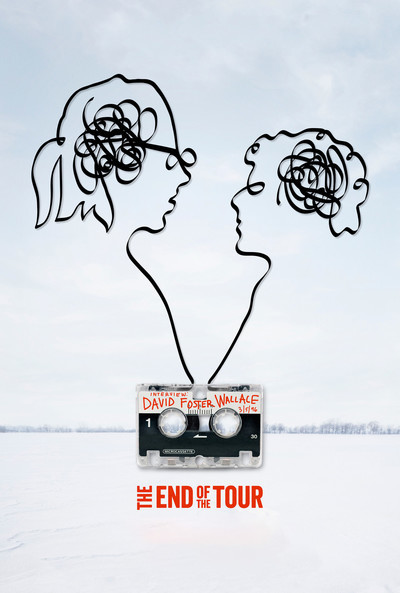