The writer-performer Sacha Baron Cohen clearly places no credence in the idea that an explorer may find himself with no new worlds to conquer. Over the course of his career he has delved into and exhausted several personae, more than a couple of them expressly designed to hoodwink the famous and the fatuous. Donald Trump recently boasted of his acumen by recalling that he immediately walked out of an Ali G interview, the dim Mr. G having been a satirical character created by Baron Cohen at the start of his comedic reality exploits back in the day. With the characters Borat and Bruno, Baron Cohen was similarly outrageously prankish, but by the time he decided to impersonate a Middle Eastern despot, Baron Cohen was too famous to successfully pull off the kinds of stunts he used to; hence, 2012’s “The Dictator” went for a concentrated, frenetic double-barreled approach of spectacular crassness and scattershot satire.

His latest project, “The Brothers Grimsby,” finds him continuing in that mode. The movie’s premise, to U.S. eyes at least, appears to be a send-up of tech-crazy conspiracy-driven spy pictures, and it is that. But it’s also a merciless lampoon of certain types in the contemporary British working class; “Grimsby” isn’t the surname of the brothers played by Mark Strong and Baron Cohen but rather the real name of a real British town, a no-longer-booming seaport that has been named the worst place to live in England by more than one publication. The movie opens with Baron Cohen’s pudgy sideburned character Nobby having a go with his sex partner to R. Kelly’s “Bump and Grind"; a cutaway reveals that he’s gone at it in a mattress store, and the next shots show Nobby carrying the mattress on to a bus. This is one of the film’s milder gags. It so happens that football-loving, multiple-child-rearing Nobby has a younger brother he misses so terribly he’s kept his childhood bedroom intact. That brother is Strong’s character, Sebastian, now a super-kitted-out-undercover agent for British intelligence. Nobby gets wind of his brother’s whereabouts and messes up a mission, inadvertently causing the actor Daniel Radcliffe to get infected by HIV. It’s complicated. Once reunited, the brothers are compelled to act in tandem to prevent a greater contagion from sweeping the world.

Am I giving a plot description here? I am, and I don’t know why. The storyline of “The Brothers Grimsby,” like almost everything else about the movie, is simultaneously labored and half-assed. It’s one of those movies that’s barely a movie; scenes don’t follow any discernible logic, the action is incoherent when it’s not deliberately inane, and so on. (The director is Louis Leterrier, of “Now You See Me” fame, presumably brought on board to bring an action-genre sheen to the proceedings, which he does not really do.) The scenario is almost exclusively in the service of the set pieces, which are terrifically invested in raising the stakes for gross-out humor. Again, a small firework protruding from Nobby’s butt in an early scene in the film is the stuff of one of the movie’s most refined jokes. Later on there’s a riff on the “suck out the poison” bit from Woody Allen’s “Bananas,” updated and firmly planted into the world of that sexual practice introduced to moviegoers of cult persuasion by John Waters’ “Pecker.” Almost all the gross-out humor here recalls Waters’ work. It’s as if the ethos of “Pink Flamingos” was filtered through a bad jag on crystal meth, with a lot of visual effects money thrown after it. While it’s interesting to see that this kind of stuff, which used to be relatively unspeakable in the nicer homes of America, has entered entertainment’s mainstream, it’s also, frankly, a little dispiriting. Maybe that’s because it all gets so predictable after a while. When Nobby and Sebastian are fleeing from assassins in Africa, they come across a herd of elephants migrating across a plain. Where are they to hide among all these wild animals? Unfortunately for me, I was able to guess without much effort. Ew.

More dispiriting is watching Gabourey Sidibe allowing herself to be reduced to a sight gag in a scene directly prior to the one with the elephants. Sure, it’s arguably laudable that the “Precious” star has a raucous sense of humor about herself. And it’s also true that none of the other performers here, save maybe Ian McShane, Penelope Cruz, and Baron Cohen’s wife Isla Fisher (the movie has a big and wide-ranging cast, which also includes Rebel Wilson, and you’d never guess what kind of character she plays) escape the movie with their dignity intact. But there’s something a little opportunistic about the way Sidibe is used here.

Is the movie entirely without laughs? No. I chuckled appreciatively not at the gross-out humor but at some of the dry reactions the characters had after their body-function ordeals. The bit where Nobby discovers how much “fun” it can be to use a gun is nasty but chortle-inducing, and some sharp social observation humor sneaks in at the movie’s margins. But as a full movie experience this did not drop my jaw in a consistently enjoyable way. And the movie’s Trump joke is pretty ineffectual. Sad! 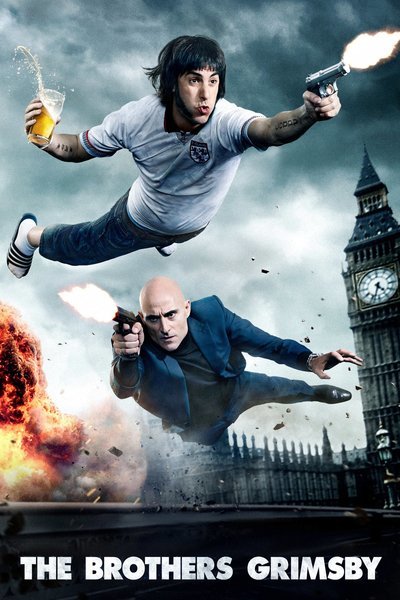 Gabourey Sidibe as Baun the Cleaner