"The Dictator" is funny, in addition to being obscene, disgusting, scatological, vulgar, crude and so on. Having seen Sacha Baron Cohen promoting it on countless talk shows, I feared the movie would feel like deja vu. But no. He establishes a claim to be the best comic filmmaker now working. And in a speech about dictatorships, he practices merciless political satire.

Compared to the gleeful transgressions of "Borat" and "Bruno," this is Cohen's most conventional film. It has a plot, it has a romance, it sticks to the story. Not that it's mainstream, although judging by the laughter of a preview audience, who knows where the stream is anymore? He also wisely gets in, gets his laughs, and quits. The movie, like Bruno," falls short of 90 minutes, in an era where too many comedies run on relentlessly.

Cohen plays General Admiral Aladeen of the North African nation of Wadiya, which seems superimposed upon parts of Egypt and Sudan and is a spitting distance from Saudi Arabia. Here he occupies a huge palace, used for addressing admiring throngs of his worshippers and having sex not only with Megan Fox, but also, judging by his wall of post-coital Polaroids, Kim Kardashian, Arnold Schwarzenegger and Oprah. Megan Fox has a great cameo, showing up for sex but drawing the line at an all-night cuddle.

Aladeen's premier is Tahir (Ben Kingsley), rightful heir to the throne, who is plotting to overthrow him. After an assassination fails, Tahir encourages Aladeen to address the United Nations, where he hopes another assassination will succeed. After being de-bearded by a security man (John C. Reilly), Aladeen finds himself wandering the streets of Manhattan while being impersonated in public by a body double.

He finds his way into an extreme left-wing health food store run by Zoey (Anna Faris), and despite the radical difference in their beliefs the General Admiral finds himself falling for her. That sets up satire in general about feminists, vegetarians and immigrant-huggers. Then Aladeen wanders into Manhattan's "Little Waadeya" neighborhood, where a Wadiyan restaurant seems filled with people he thought he'd executed.

Although the movie very casually follows the progress of the romance and the assassination scheme, Cohen and the director, Larry Charles, are about as dedicated to plot as the Marx Brothers; the movie's spiritual ancestor is "Duck Soup" and Groucho's Freedonian dictator Rufus T. Firefly. There is also a taste of Buster Keaton's physical humor in a scene where Aladeen attempts to slide on a cable high above the street into the upper floor of a hotel.

Cohen's attack on the material is free-wheeling, his attitude is anarchist, and he's more good-humored than in "Borat" and "Bruno." I hope he isn't entertaining any ambitions to become beloved and popular. I expected this to be the most offensive of the three titles, and while you can't say it isn't offensive (especially in scenes involving a dead civil rights leader's severed head), it's somehow… nicer, maybe you could say.

Footnote: I want to know more about the Newcastle Hotel in New York. I don't believe there is one. It provides the fodder for a running gag about product placement that plugs the name again and again and again. 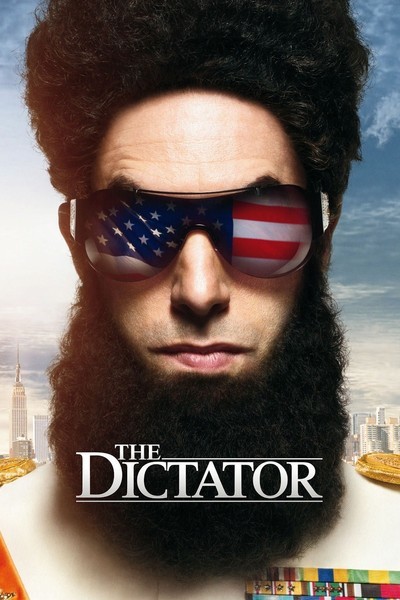