Now You See Me

Louis Leterrier’s directorial debut, "The Transporter," was the movie that established Jason Statham as an action star. It was also an important early hit for EuropaCorp, the French studio that kickstarted the careers of Pierre Morel ("Taken"), Olivier Megaton ("Colombiana," "Taken 2"), and actor / director Guillame Canet ("Tell No One"). After helming two more movies for EuropaCorp — "Unleashed" and "Transporter 2" — Leterrier decamped to Hollywood, where he ended up directing the leaden, mega-budgeted movies "The Incredible Hulk" and "Clash of the Titans," the latter of which he has since disowned.

Leterrier’s new film, "Now You See Me," is in some ways a return to his roots. Like his two "Transporter" movies, it’s light on seriousness and heavy on style — a razzle-dazzle fantasy about a team of bank-robbing illusionists. It’s slick, deliberately silly, and sprinkled with visual confetti — Steadicam spins, lens flares, CGI trick shots.

The movie opens by introducing the four leads: a cocky street magician (Jesse Eisenberg); his former assistant (Isla Fisher), whose solo act focuses on gory stunts; a once-famous mentalist (Woody Harrelson) who's been reduced to using cold reading and hypnosis to shake down people for cash; and a sleight-of-hand artist (Dave Franco, brother of James) who moonlights as a pickpocket. A hoodie-wearing stranger slips each of them a Tarot card inscribed with a date and a New York address.

Flash forward to Las Vegas a year later, where the four now perform as a headlining act called the Four Horsemen. For their big finale, they present a complicated illusion where a random audience member appears to be teleported into the vault of his bank. The audience member is told to turn on the vault's ventilation system, which sucks up a palette of Euros; a few seconds later, the bills rain down over the audience. The crowd goes wild.

The next day, the magicians are brought in for questioning by the FBI; it seems the audience member's bank has been robbed, and a prop used in the magic act has been found at the scene. Soon, the magicians are being investigated by a surly agent (Mark Ruffalo) and an Interpol detective (Mélanie Laurent); they know the Four Horsemen are involved in the crime, but can't figure out how.

Also on the Four Horsemen's trail is a smug ex-magician (Morgan Freeman) who has made a fortune revealing the secrets behind well-known illusions. Freeman can make the clunkiest exposition sound good (see: Christopher Nolan's Batman movies, or the recent "Oblivion"); for the most part, that's what he's here to do. Turning Freeman into the movie's de facto on-camera narrator is "Now You See Me"'s neatest trick, especially since much of the movie's third act revolves around tweaking his all-knowing screen persona.

There is, of course, an explanation for the heist — and it isn't "magic" — but said explanation doesn't so much strain credibility as negate it. "Now You See Me" is proudly outlandish; the Four Horsemen's methods — which involve giant mirrors, doubles, hypnosis, copious amounts of flash paper, and, uh, holograms — are as logic-defying as their tricks. Had the movie ended by simply revealing that the four were wizards, it would be more believable.

That, however, wouldn't be as fun. Much of what makes "Now You See Me" so entertaining — in a gaudy, disposable, Vegas act sort of way — is its ever-escalating ridiculousness. After the bank job, the Four Horsemen go on a series on ever-more-complicated heists, which turn them into fugitives and folk heroes. The movie, which began as "just" a bank-robbing magician story, eventually becomes a narrative Rube Goldberg contraption; conspiracies, secret identities, decades-old vendettas, and occult brotherhoods are involved.

The second half of the movie is effectively one long, protracted chase, with Ruffalo and Laurent always a few steps behind the Four Horsemen. It's here that Leterrier seems to really be in his element; a lengthy fight scene where Franco fends off FBI agents using throwing cards and sleight-of-hand tricks is as poppy and kinetic as anything in "The Transporter."

Like the EuropaCorp movies that started Leterrier's career, "Now You See Me" emphasizes cinematography over just about everything else, including narrative sense. Unusually, it has two directors of photography, both of whom are specialists in flashy, special-effects-ready extravagance: Mitchell Amundsen ("Transformers," "Wanted") and Larry Fong ("Super 8," as well as the Zack Snyder movies "300," "Watchmen" and "Sucker Punch").

Just as unusually — at least for an effects-heavy production — it's shot on celluloid with anamorphic lenses. This gives the movie a retro visual texture and a more classical sense of widescreen space; the trade-off is that the digital effects look less convincing than they would in a digitally-shot movie. However, in a film where nothing is supposed to be credible, mediocre CGI seems appropriate. It’s not meant to seem realistic, so why should it look real? 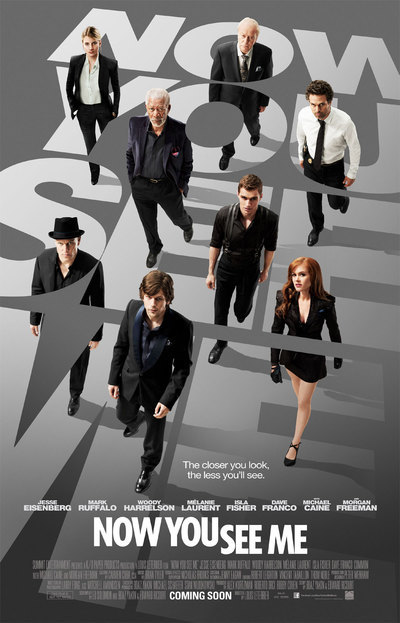