The peculiar thing about Spock is that, being half human and half Vulcan and therefore possessing about half the usual quota of human emotions, he consistently, if dispassionately, behaves as if he possessed very heroic human emotions indeed. He makes a choice in “Star Trek II” that would be made only by a hero, a fool, or a Vulcan. And when he makes his decision, the movie rises to one of its best scenes, because the "Star Trek" stories have always been best when they centered around their characters. Although I liked the special effects in the first movie, they were probably not the point; fans of the TV series wanted to see their favorite characters again, and “Trek II” understood that desire and acted on it.

Time has passed since the last episode. Kirk has retired to an administrative post. Spock is commanding the Enterprise, with a lot of new faces in the crew. The ship is on a mission concerning the Genesis device, a new invention which, if I understand it correctly, is capable of seeding a barren planet with luxuriant life. A sister ship, the USS Reliant, is scouting for lifeless planets and finds one that seems to be dead, but its instruments pick up a small speck of life. Crew members investigate, and find the planet inhabited by an outlaw named Khan, who was exiled there years ago by Kirk, and has brooded of vengeance ever since.

Khan is played as a cauldron of resentment by Ricardo Montalban, and his performance is so strong that he helps illustrate a general principle involving not only Star Trek but “Star Wars” (1977) and all the epic serials, especially the “James Bond” movies: Each film is only as good as its villain. Since the heroes and the gimmicks tend to repeat from film to film, only a great villain can transform a good try into a triumph. In a curious way, Khan captures our sympathy, even though he is an evil man who introduces loathsome creatures into the ear canals of two Enterprise crew members. Montalban doesn't overact. He plays the character as a man of deeply wounded pride, whose bond of hatred with Admiral Kirk is stronger even than his traditional villain's desire to rule the universe.

There is a battle in outer space in this movie, a particularly inept one that owes more to "Captain Video" than to state-of-the-art special effects. I always love it when they give us spaceships capable of leaping across the universe, and then arm them with weapons so puny that a direct hit merely blows up a few control boards and knocks people off their feet. Somehow, though, I don't much care if the battles aren't that amazing, because the story doesn't depend on them. It's about a sacrifice made by Spock, and it draws on the sentiment and audience identification developed over the years by the TV series.

Perhaps because of that bond, and the sense that an episode may be over but the Enterprise will carry on, the movie doesn't feel that it needs an ending in a conventional sense. The film closes with the usual "Star Trek" end narration, all about the ship's mission and its quest, and we are obviously being set up for a sequel. You could almost argue that the last few minutes of “Trek II” are a trailer for “Trek III”, but, no, that wouldn't be in the spirit of the Enterprise, would it? 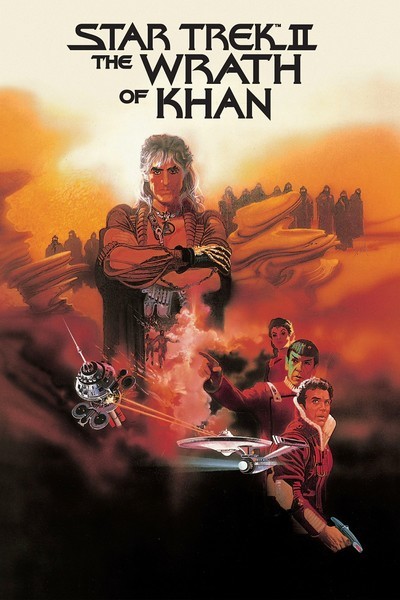