As odd as it may sound, there have been instances where French filmmakers have taken a stab at that most seemingly all-American of story genres, the Western. A number of silent Westerns were produced between 1910 and 1915 and there was a minor revival of the genre in the Sixties that probably hit its apotheosis with the release of Louis Malle’s 1965 “Viva Maria!,” a sexy goof in which Brigitte Bardot and Jeanne Moreau played two women named Maria who inadvertently invent the striptease and then become revolutionaries in Central America. More recently, there was the genre-breaking “Blueberry” (2004), a very trippy adaptation of the French-Belgian comic book series illustrated by the legendary Moebius. Presented in America as a conventional oater named "Renegade," that film featured the likes of Vincent Cassel, Juliette Lewis, Michael Madsen, Eddie Izzard, and Ernest Borgnine.

Nevertheless, the idea of a French-made Western still seems offbeat enough to ensure that most viewers will approach a movie like “Savage State” as little more than a novelty. That would be a shame because while it has an undeniable curiosity factor, the film has merit as a sprawling and effective work that combines the expected action beats with quieter, character-driven moments, and elements of pure weirdness to surprisingly strong effect. Even when it doesn’t quite work, and it's undeniably uneven at times, it at least has the good taste to offer up flaws borne of ambition instead of laziness.

The time is 1863 and French settler Edmond (Bruno Todeschini) is living a genteel upper-class life in Missouri with his wife, Madeline (Constance Dollé) and their three daughters: the headstrong Esther (Alice Isaaz), the sickly Abigaelle (Maryne Bertieaux), and Justine (Déborah François), who has dedicated her life to helping to care for Abigaelle. The Civil War is raging and while it's the official policy of Napoleon III that French settlers in America take a neutral position on the conflict, the arrival of the Union Army in town makes that increasingly difficult. When a local dance goes violently wrong after Esther refuses to dance with a thuggish Union soldier, Edmond decides that enough is enough and that he and the family, along with their emancipated maid Layla (Armelle Abibou), are going to take the next boat back to France.

To aid them on this arduous journey, Edmond hires Victor (Kevin Janssens), a laconic Man with No Name-type he has employed in the past, to lead the way. As we see in the opening scene, Victor’s previous job for Edmond, of brokering a deal trading diamonds for French perfume, went badly after Victor tried to pull a scam. Many died, including that of Abigaelle’s fiance. But the person he was scamming, Bettie (Kate Moran), is not willing to let things lie and, backed by her gang of burlap-masked sidemen, is now in hot pursuit of him. There also may have been a romance between them in the past, and when Bettie gets an inkling that Victor and Esther might be an item, she's further enraged.

So yeah, not only is “Savage State” a French-made Western, it's a Western in which the female characters assume all of the dominant roles in the narrative while the men, for all their bluster and bravado, are little more than useless appendages whose accomplishments are limited to bloodshed and bad decisions. Taking a feminist approach to what is traditionally considered to be a masculine genre is not unheard of. The film film even plays explicit homage to one of the most famous examples, Nicholas Ray’s still-astonishing “Johnny Guitar” (1954), via the relationship between Victor and Bettie, who seems constantly torn between her desire to kill him and her desire to sleep with him.

Rather than simply offering the same narrative tropes with a simple twist, writer/director David Perrault swings for the fences; his story uses the perilous journey template as a springboard for musings on race, sex, gender, family, colonialism, and the entire Western mythos. These additions help transform the film from a mere oddity into something legitimately interesting, and while the slow burn approach may frustrate some viewers expecting the usual thrills and spills, even the most seemingly extraneous element on display—Esther’s fascination with Layla’s voodoo tales—ends up paying off nicely.

As Esther, whose innate sense of determination eventually drives her to become the de facto leader as her family presses on, Isaaz makes for a strong and compelling heroine throughout. Even if her scenes with Janssens charting their relationship do not always convince, she more than makes up for them with the far-more interesting friendship that she and Abibou end up developing. Equally impressive is Moran as her nemesis, though her character’s strange similarities to the one played by Rebecca Ferguson in “Doctor Sleep” may be a bit disconcerting for some.

On a filmmaking level, "Strange State" is hypnotic throughout thanks to the strong contributions from cinematographer Christophe Duchange (whose efforts will make you wish that you could see it on the big screen where it belongs), production designer Florian Sanson, and costume designer Veronique Gely. The score by Sebastien Perrault is also interesting in how it never conforms to what one might expect to hear in a Western, yet it always seems to fit.

There are times when “Savage State” bites off a little more than it can chew: Esther’s sisters aren't developed particularly well, an effort to give Justine more shading is more than a bit awkward, and there are points where I found myself wishing that Perrault would put the spurs to the narrative a tad. Those in the mood for a straightforward Western may not entirely go for "Savage State," but those looking for something different that manages to be both epic and intimate simultaneously, and which filters a familiar story through an unexpected perspective, are likely to enjoy it. 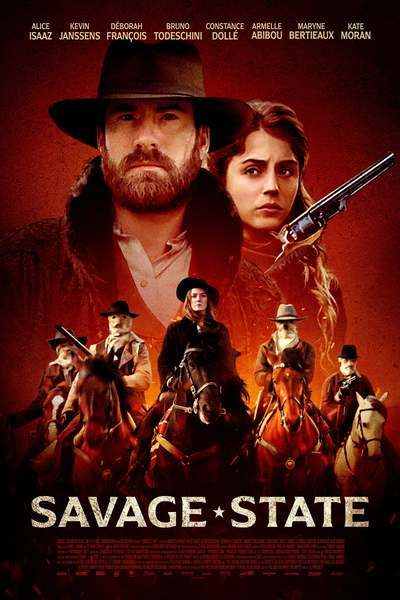