Mike Flanagan’s “Doctor Sleep” connects the visions of Stephen King and Stanley Kubrick with his own style, made most popular in Netflix’s “The Haunting of Hill House.” It is an often effective blend of the three as it’s forced to pay more homage to Kubrick’s vision than King was in his book, which served purely as a sequel to a novel that the filmmaker had drastically changed when he adapted it in 1980. Flanagan was tasked with making a sequel to a film that stays loyal to a book that ignores the changes made in the first movie. That ain't easy. Different characters are in different places at the end of the book and film versions of "The Shining," and Flanagan has to tie the two together. For example, King’s original book ends with the explosion of the Overlook Hotel. We all know that Kubrick’s “The Shining” does not. And while one can sometimes feel Flanagan struggling to satisfy both King and Kubrick fans when he really should be trusting his own vision, he’s talented enough to pull off this difficult blend of legacies.

After a prologue that reveals a young Danny Torrance figuring out how to control his “shining” powers and capturing the ghosts that haunt him, we’re re-introduced to an adult Dan, played by Ewan McGregor. Detailed a bit more in the book, he’s basically using alcoholism to hide his trauma, and he reaches rock bottom when he takes money from a single mother with whom he just had a coke-addled one-night stand. He jumps a bus to New Hampshire, where he tries to find stability, joins AA, and makes a friend named Billy (Cliff Curtis), before getting a job at a hospice, where his shining power allows him to help people on the edge of death cross over. There’s a respectful solemnity to these scenes that emerge from Flanagan’s empathetic and emotional side. The idea that someone who learned through trauma that ghosts are real could comfort those wondering what happens after death is one that Flanagan takes seriously.

While Dan is earning the nickname that gives the film its title, we’re introduced to two new characters. Rose the Hat (Rebecca Ferguson) leads a roving group of powerful creatures who aren’t exactly invulnerable but have found a way to be immortal. They call themselves the True Knot, and they travel the country looking for children who “shine,” stealing their essence and feeding off of it. The idea that there are forces in this world that thrive off pain and misery, selfishly living off the greatness found within others, is a very King creation, and Flanagan doesn’t shy away from the grisliness here. In one of the film’s most disturbing scenes, the True Knot kidnaps a boy (Jacob Tremblay) and brutally murders him—after all, torture makes the steam he releases that much sweeter.

Connecting the Rose and Dan arcs is the character of Abra Stone (newcomer Kyliegh Curran), who is so powerful that she literally draws the attention of the True Knot and finds a way to psychically communicate with Dan. The True Knot could feed on her for generations or make her one of their own. Abra finds her way to Dan, and the two draw Rose and her team into a final showdown, which everyone who’s ever seen a movie knows can only happen in one place.

Flanagan and his team wisely don’t choose to visually emulate “The Shining” for most of “Doctor Sleep,” producing a film that looks a lot more like an episode of “Hill House” than the Kubrick original. The film has arguably too many close-ups and a bit too much of a cool gray/blue color palette, but these elements add to its eerie, twilight feel. Flanagan’s best work has a way of blending the emotional and the supernatural—things go bump in the hearts and minds of his characters as much as in the darkened hallways—and that makes him a good fit for a book that needed an emotional touch to work as a film. “Doctor Sleep” is often at its best when Flanagan is allowed to flourish and play away from both the source material and the Kubrick film. When he returns to the Kubrick vision, including actors playing iconic roles from the movie, it sometimes feels like “Doctor Sleep” is in a very big shadow.

The best thing about Flanagan’s film by some stretch is the work by Rebecca Ferguson. The director of “Gerald’s Game” and “Hush” proves again to be a very capable filmmaker when it comes to directing actresses, getting Ferguson’s career-best work to date. She walks away with the film as a presence that’s somehow both captivating and terrifying. Her take on Rose the Hat turns a thin character on the page into a great villain, someone who uses her good looks and charisma to disguise her evil intentions. McGregor isn’t so lucky, sometimes falling victim to a source material that never really gave us much of a character, while Curran is an engaging young actress, at her best when she’s selling Abra’s understandable confidence. I liked how Abra isn’t just a scared victim to be rescued by Dan. She needs help, but she also knows she’s a badass.

What’s going to be most controversial about “Doctor Sleep” is the final act, when, slight spoilers, Flanagan and his team find themselves in the halls of Kubrick’s film. And make no mistake—it is Kubrick’s film in which they’re playing and not King’s book. Some fans of “The Shining” will consider this sacrilegious, some will find it playful and nostalgic. I’m in the middle. I think Flanagan goes back to the Kubrick well 2-3 too many times, but the changes he makes to the final third of King’s book are smart and effective. He twists King’s sequel into something that’s less about empowerment and more about overcoming trauma, reclaiming the darkest moments of your life. He makes major changes to the source material and comes out illustrating again what a confident, interesting filmmaker he can be. Kind of like someone else did four decades ago. 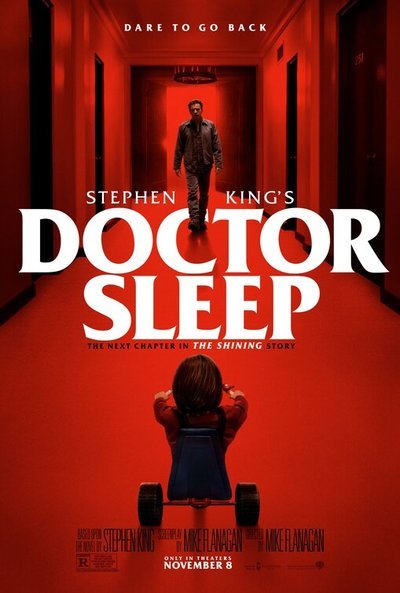 Rated R for disturbing and violent content, some bloody images, language, nudity and drug use.

Rebecca Ferguson as Rose the Hat