"I never met a woman who was more man."

Nicholas Ray's "Johnny Guitar" (1954) is surely one of the most blatant psychosexual melodramas ever to disguise itself in that most commodious of genres, the Western. Consider: No money was lavished on the production. The action centers on a two-story saloon "outside town," but we never even see "town," except for a bank facade and interior set. So sparse are the settings that although the central character (Joan Crawford) plays the tavern owner and goes through a spectacular costume charge, we never see her boudoir -- she only appears on a balcony above the main floor, having presumably emerged from the sacred inner temple.

A cheap Western from Republic Pictures, yes. And also one of the boldest and most stylized films of its time, quirky, political, twisted. Crawford bought the rights to the original novel, Nicholas Ray signed on to direct, and I wonder if they even openly spoke of the movie's buried themes. One is certainly bisexualism; Crawford's tavern-owner Vienna is, it is claimed, in love with "Johnny Guitar" (Sterling Hayden), but has not seen him in five years. She effortlessly turns tough hombres into girly-men, and her bartender observes to Johnny, "I never met a woman who was more man."

Her archenemy Emma (Mercedes McCambridge) is allegedly in love with "The Dancin' Kid" (Scott Brady) and is jealous because he is allegedly in love with Vienna ("I like you, but not that much," Vienna tells him). But there is hardly a moment when Emma can tear her eyes away from Vienna to glance at the Kid. All of the sexual energy is between the two women, no matter what they say about the men. Crawford wanted Claire Trevor for the role, but the studio, perhaps having studied the script carefully, insisted on McCambridge, who was not a lesbian but played one, as they say, in the movies.

That casting led to more Crawford bitch legends, as on the day when she threw McCambridge's costume in the middle of a highway. The chemistry of loathing is palpable, as it was between Crawford and Bette Davis in "Whatever Happened to Baby Jane." Both women wear fetishistic black leather, silk and denim costumes that would have been familiar enough to students of 1954 pornography: The tightly corseted waists, the high boots, the long shirts, the tight bodices, the lash of lipstick; give us Meg Myles in "Satan in High Heels."

McCambridge, said to be a "cattle baron" (not baroness), dominates her posse of cowboys and lackeys, standing before them in a wide, challenging stance. She's shorter than they are, but is always strutting in the front while they almost cower. Crawford often appears from above on her balcony, worshipped by the camera in low-angle, adored by her loyal employees, ordering Sam, her croupier, "Spin the wheel. I like the way it sounds."

Somebody has to spin it. Throughout the film, the saloon attracts no ordinary customers, only characters in the plot. Has a Western ever been more casual about its male leads? "Johnny Guitar" is about the hatred between Vienna and Emma, and Sterling Hayden seems to know it. Brought into town as fire-power when Vienna fears gun trouble, he claims to have given up guns, speaks softly, talks of his onetime love of Vienna with only barely convincing regret, and is laid-back, as Sterling Hayden rarely ever is. The critic Dennis Schwartz recalls: "Francois Truffaut said it reminded him of 'The Beauty and the Beast,' with Sterling Hayden being the beauty."

The plot. Ridiculous. Vienna owns the saloon in a choice location outside town. We are not sure how a single woman without means paid for it, but are reminded by Marlene Dietrich in "Shanghai Express" that "it took more than one man to change my name to Shanghai Lily." Apparently Vienna is now all paid up. but the railroad is coming through, and the townsfolk fear it will run past her door and put them out of business.

The town is led by McIvers (Ward Bond) and his tool the sheriff (Frank Ferguson), who are led by Emma as they demand what Vienna knows about a stagecoach robbery. The stolen cash was intended for her brother's bank. Since the Dancin' Kid has rejected Emma's love, it stands to reason, doesn't it, that he stuck up the bank, along with his tough sidekicks (Ernest Borgnine, Ben Cooper and Royal Dano)?

Johnny Guitar arrives at about the same time. Coincidence? Imagine the notoriously deadly Old West and an unarmed cowboy with only a guitar. Well, he does play it once. But there is a secret: Guitar is the pseudonym for Johnny Logan, a notorious gunslinger who retired five years ago. Vienna was Guitar's lover until he "wasn't ready" for marriage (not to her, for sure). And the sheriff, McIvers, etc. are trying to frame someone -- the Kid, maybe, for sticking up the stagecoach. Their suspicions are not unfounded, since there are literally no other characters in the movie, except for the faceless coots who crowd into doorways behind McIvers.

The dynamic of their investigation and their attempts to force townsfolk to testify against one another form an allegory squarely aimed at the House Un-American Activities Committee, which in 1954 was trying to force alleged communists to "name names" of other alleged communists; the screenplay was ghosted by the blacklisted Ben Maddow. A significant moment comes when Johnny Guitar acknowledges his own name.

There are extraordinary moments in the movie, not least when Crawford, who has been dressed entirely in black, suddenly appears on the balcony in a stunning white gown and cows the men with her presence and a piano recital(!).

It is also fascinating to watch her and Johnny use words as love weapons. This dialogue, quoted by the critic Derek Malcolm, could have appeared in the laconic Broadway social dramas of the period:

Johnny:How many men have you forgotten?

Vienna:As many women as you've remembered.

Vienna:Sure. What do you want to hear?

Johnny:Lie to me. Tell me all these years you've waited ...

Vienna:I would have died if you hadn't come back.

Johnny:Tell me you still love me like I love you.

Whoa! I see Brando as Johnny, Shirley Knight as Vienna. That's not Western dialogue, it's cynicism made audible. There are other moments I will leave for you to savor, and I trust you may share my bafflement about the route from the waterfall to the hideout, but ponder this: Everyone involved in this movie had made countless other films, knew all about the clichés and conventions, and must have known how many they were breaking. As the scenes come along that are clearly an indictment of HUAC, were they thinking they could get away with murder because the surrounding movie was so goofy?

It was goofy then, and very strange now. The more you think about the tavern and the "town" and the tragedy that plays out against the unpopulated landscape, the more you see them playing dice with their destinies. Spin the wheel. I like the way it sounds. 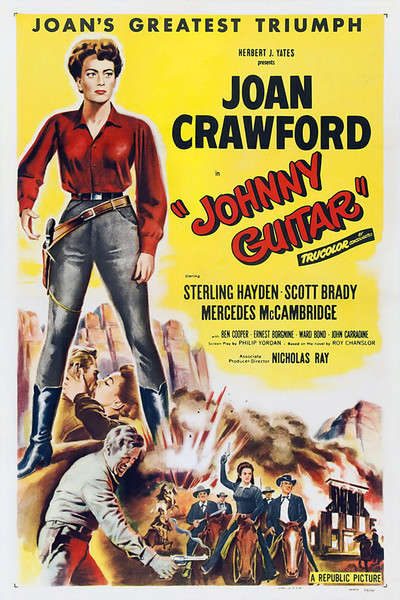