Bill Murray’s image as an entertainer has always wobbled somewhere between a debauched rock star who demands a piping-hot Wolfgang Puck pizza to be delivered at 4 a.m. while on tour in far-off Reykjavik, and a crazy, fashion-challenged uncle who makes you laugh like no one else but also scares you more than a little.

Therefore, when the trailers for “Rock the Kasbah” first appeared, fans of the man who once engaged in mortal combat with golf course vermin mentally waved lighters in the air with joy. It was taken for granted that Murray would be great as Richie Lanz, a two-bit con-artist of a talent agent with an office in a dilapidated Van Nuys motel who claims to have discovered Madonna, and takes credit for urging Jimi Hendrix to play "The Star-Spangled Banner" at Woodstock.

Never mind that Chris O’Dowd has already done basically the same role to perfection in a superior film, “The Sapphires.” How could we not have a good time as Murray heads to violence-riddled Afghanistan to hang out with the likes of Bruce Willis, Danny McBride, Scott Caan, Zooey Deschanel and Kate Hudson, the latter channeling her “Almost Famous” groupie as a jaded lady of the night named Miss Merci who conducts her business in a double-wide trailer on the streets of Kabul?

But the first signs that “Rock the Kasbah” might not deliver on all the promises suggested in its preview arrive in the film's opening scene, which we learn occurs “in the recent past.” We see a young girl in a shadowy cave whose features, save for dark expressive eyes, are hidden by a burka. She proceeds to hook up a power source to a TV and the logo for “Afghan Star,” an “American Idol”-like singing contest, appears. Her eyes widen and she is transfixed.

It doesn’t take much to predict that rock ‘n’ roll anarchy will eventually take a back seat to a sentimental bid for us to cheer for an underdog. Salima—as we later learn she is called—is forbidden to watch the show since she is hiding out in the hills. On top of that, she has performing aspirations that don’t conform to her culture’s restrictions on female behavior. Nevertheless, she will find a way to compete. And guess who eventually helps?

Add rather startling explosions and bloodshed to this tonal discord, and you have a movie with one too many agendas—especially considering it is inspired by a real-life female singer who broke the gender barrier on the actual “Afghan Star.” A veteran director like Barry Levinson of “Good Morning, Vietnam” and “Rain Man” fame and a screenwriter like Mitch Glazer, a one-time Rolling Stone reporter who contributed to Murray’s “Scrooged,” should have done a better job at weaving all these shaggy strands together considering it took “Rock the Kasbah” seven years to get off the ground.

The road to get to the talent contest part of the story is a long and bumpy one, and not just because Salima’s unsympathetic father turns out to be the rather intimidating chief of their village. Murray does manage to score some memorable moments along the way, such as strumming a lute-style instrument while raucously serenading locals with a strident rendition of Deep Purple’s “Smoke on the Water," and spinning comic gold out of such lines as “I’m not a loser. I am a quitter.”

But first, we have to believe that sweet Zooey Deschanel, who has always looked like the sort who would gently transfer spiders outdoors rather than squish them, is a karaoke-level singer hired for a USO gig who would cruelly strand Murray in a dangerous foreign land after stealing his cash and passport. She also leaves the movie a bit stranded, never to be seen again, which is too bad since she would have made a good sidekick.

Then we have to care about Lanz, who treats life as if it were a perpetual game of “Let’s Make a Deal” as he relies on unsavory types—Danny McBride and Scott Caan as wise-ass gun runners and Bruce Willis as a smirking, flack-jacketed mercenary—to get him out of his cash-strapped, passport-less pickle. Not helping matters is that Murray’s co-stars aren’t so much playing characters but simply being versions of themselves. The three co-stars act as though they were doing cameos in a Bob Hope and Bing Crosby road comedy.

Also, when you use a revered Clash anthem as your title, even if there aren’t any kasbahs to be found in Afghanistan, audiences are going to expect to hear it at some point. But it is not to be. As compensation, there is plenty of classic rock on the soundtrack, including Blind Faith’s “Can’t Find My Way Home,” Harry Nilsson’s ”Jump Into the Fire” and Bob Dylan’s “Knockin’ on Heaven’s Door.” As if we haven’t heard them enough in our lifetimes.

In the end, it is up to Leem Lubany, a beauty who hails from Palestine and made her debut in the 2013 Oscar-nominated foreign language film "Omar," to lend a much-needed grace note as Salima. Just when I was ready to give up on “Rock the Kasbah,” she performs a gorgeous version of Cat Stevens’ “Peace Train” and—in the context of the movie—the words to the ‘70s easy-listening staple shine anew with fresh relevance. 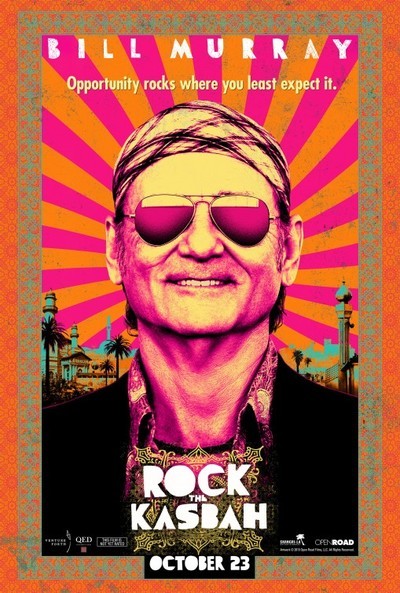 Rated R for language including sexual references, some drug use and brief violence