The real-life Dreamgirls from Down Under

What if the Supremes had been born Down Under? A very conventional story of a '60s Australian girl group gains extra power from its context and setting in this fact-based story set to the beat of Motown soul.

Co-written by the son of one of the real-life singers and directed by Wayne Blair, who starred in the play based on their story, "The Sapphires" is clearly a labor of love for all involved. It's also a warm tribute to four women for whom success as performers was just the beginning.

Before the action begins, we learn two stark, devastating facts. Until 1967, the native Australians dubbed "Aborigines" by British settlers were not classified as humans by the Australian government. They were considered "flora or fauna." The government had the authority to remove light-skinned native children from their families as part of a program (depicted in "Rabbit-Proof Fence") to make them part of the white community.

In "The Sapphires," we meet the future singers as children, three sisters and their cousin, performing at a family celebration in 1958. The light-skinned cousin is taken to become part of what is now known as the "Stolen Generation," with no contact with her family.

The accompanist/master of ceremonies is Dave (Chris O'Dowd), a broken-down mess who seems to have burned every possible bridge that once linked him to music, a job, his home in Great Britain or any semblance of self-respect. But he still knows the real deal when he hears it. As amateurish as they are, Dave sees what the sisters can become.

They ask him to come with them to try out for a chance to perform for American GIs in Vietnam for $30 a week. Soon they have reconnected with their cousin Kay (Shari Sebbens), switched from country to Motown, and passed the audition under their new name, the Sapphires. O'Dowd's shambling charm plays well against Mailman's protective ferocity, and the wartime background and struggles against bigotry add some heft to what might otherwise seem like a lightweight jukebox musical.

A girl group with four members under high-stress touring conditions means many opportunities for romance, adventure and power struggles, plus the inevitable rehearsal montages. "Can you make it sound blacker?" Dave asks at one point. He switches lead singers, guides them on stage presence and suggests some different songs. Both country and soul music are about loss, he tells them, but in country music, the lead singer seems to have given up. "With soul, they're still struggling." Dave's passion for the music and belief in the girls are scary but exhilarating. So is being away from home for the first time.

The girls learn that performing is about more than great songs and tight harmonies as they are touched by the valor of the American soldiers. It is not just that the GIs expect a show; they deserve one. So the Sapphires add spangles, go-go boots, hip-shaking and a lot of attitude.

That gives them the freedom to open themselves up to new experiences and new ways of looking at themselves. It means that we get to enjoy quite a show as well. When the story line starts to feel too close to the familiar "VH1 Behind the Music" soapy sagas of backstage tensions and heartache, those fabulous classic soul songs of the '60s ring out, thoughtfully matched to what is happening offstage.

"I Heard It Through the Grapevine," "What a Man," "I'll Take You There," "Hold On! I'm Coming," and many more add tremendous energy and spirit. They are every bit as entertaining as they were nearly half a century ago. Equally entrancing is a moment when they sing a native song called "Ngarra Burra Ferra."

The credit sequence updates us on what happened after the Sapphires came home, with an extraordinary record of achievement, photos of the women who inspired the film, and a concluding line of piercing sweetness. It would be great to have a sequel, but the Sapphires deserve a documentary. 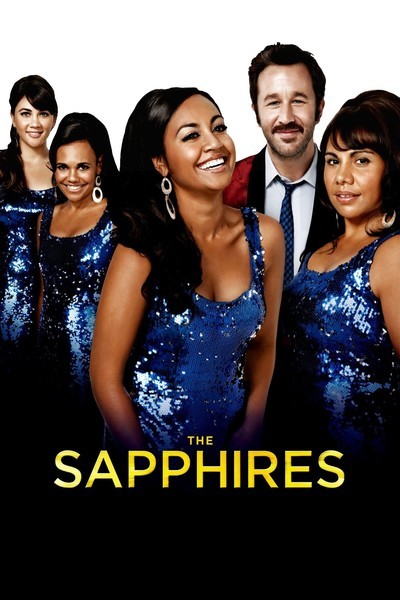 Rated PG-13 for sexuality, a scene of war violence, some language, thematic elements and smoking