Do you know the name of the high school the characters attended in John Hughes’ movies? Did you play “Pitfall!” on the Atari 2600 when you were a kid? And are you aware of what lurks behind the door of Room 237?

You may be able to answer “yes” to all three of these questions (as I was), and yet still not be able to register much more than a chuckle of recognition in response to the vast majority of voluminous pop-culture references scattered throughout “Ready Player One.” The action is breathless and non-stop, both in the virtual reality and the reality reality, but wallowing in ‘80s nostalgia is only so much fun for so long—even if you’re a child of the era (as I am)—and it only really works when it serves to further the narrative. So much of what constitutes the humor in Steven Spielberg’s adaptation of Ernest Cline’s best-selling novel is along the lines of: “Here’s a thing you know from your youth.” And: “Here’s another thing.” And: “Here’s an obscure thing that only an elite few of you will get, which will make you feel super-smart.”

Chucky from the “Child’s Play” movies shares the screen with The Iron Giant and the DeLorean from “Back to the Future.” A thrilling auto race through the virtual streets of New York finds the characters daring to outrun the T. Rex from “Jurassic Park” as well as King Kong. There’s no way to catch it all in one sitting. This is a movie that has a literal Easter egg—and it is indeed a “movie,” not a film, as Spielberg himself pointed out earlier this month during its South by Southwest premiere.

Spielberg would seem to be the ideal director for such a thorough (and overlong) trip down memory lane. This is, after all, the decade he helped define, asserting himself as one of our greatest and most influential filmmakers. “Ready Player One” may have sprung from someone else’s brain originally, but it’s a Spielbergian hero’s journey at its core, complete with lens flares early and often. The young man at its center is an obsessed gamer named Wade Watts who goes by the moniker Parzival in the massive virtual reality everyone inhabits in the movie’s dystopian future. But he’s very much a figure in the same driven, single-minded vein as Henry Thomas in “E.T. – The Extra-Terrestrial,” Harrison Ford in the “Indiana Jones” films, Tom Cruise in “Minority Report” or Tom Hanks in “Catch Me If You Can.” The actor who plays Wade Watts, Tye Sheridan (“Mud,” “X-Men: Apocalypse”), even resembles a “Close Encounters”-era Richard Dreyfuss.

“Ready Player One” is at once familiar in its fabric and forward-thinking in its technology, with a combination of gritty live action and glossy CGI. It’s an ambitious mix that can be thrilling while it lasts, and yet it fails to linger for long afterward, leaving you wondering what its point is beyond validating the insularity of ravenous fandom.

The movie’s copious needle drops drag us deeper into the decade, from Van Halen’s “Jump” and Twisted Sister’s “We’re Not Gonna Take It” to George Michael’s “Faith” and Tears for Fears’ “Everybody Wants to Rule the World.” At times, the selections can be painfully on the nose; the use of New Order’s “Blue Monday” to set the tone as we enter a large, laser-filled dance club is absolutely perfect, however.

Somewhere in the middle of all this retro mayhem (which Cline himself co-scripted with Zak Penn) is an actual story—which itself is a throwback to something that’s never specifically named. This is essentially “Willy Wonka and the Chocolate Factory,” complete with a scrappy, crafty underdog attempting to solve a series of challenges posed by a whimsical, mystical genius in hopes of winning a grand prize at the end.

The year is 2045 and the place is Columbus, Ohio. Wade lives, as so many others do, in “The Stacks,” a densely populated cluster of cruddy trailers piled high atop each other and tied together by scaffolding. To escape their dreary lives, Wade and his neighbors strap on their headgear and enter the Oasis, a sprawling virtual reality where everyone spends the bulk of their time. Yes, they’re doing VR in their RVs.

You can be whoever you want to be, go wherever you want to go, do whatever you want to do. You can be a fearsome warrior or a sexy anime vixen. You can gamble in a casino the size of a planet or climb Mount Everest with Batman. Or you can just hang out with your friends—people you’ve never actually met, but you feel like you intimately know—as Wade does when he’s in the Oasis as the chicly rebellious, “Final Fantasy”-styled Parzival. His best buddy is a hulking orc with a heart of gold named Aech (Lena Waithe), and he’s smitten with a motorcycle-riding, punk rock badass named Art3mis (Olivia Cooke).

“Ready Player One” would have been a far more compelling film with either of these characters at its center, but we’re stuck with Parzival as our bland yet brave conduit. Waithe has a swagger that’s hugely compelling; Cooke doesn’t get nearly as much of a character to work with here as she did in the gripping dark comedy “Thoroughbreds,” but at least Art3mis is Parzival’s equal in terms of her smarts and abilities, and she and isn’t simply relegated to being “the girl.”

They (and everyone else) are searching for the three hidden keys left behind by the late creator of the Oasis: the socially awkward, Steve Jobs-esque James Halliday (Mark Rylance, a much-needed source of quiet and humanity in this noisy, overwhelming world). These are literally the keys to the kingdom. Whoever finds them becomes the heir to his empire and the ruler of the Oasis. No one has ever gotten close—not even Parzival, despite his encyclopedic knowledge of the minutiae of Halliday’s life and inspiration. Meanwhile, the greedy corporate villain Nolan Sorrento (Ben Mendelsohn, chilling as always) has built a massive army of mercenaries to scour the Oasis for the keys so that he can exploit this realm for commercial gain. Which is totally evil, according to this behemoth studio blockbuster.

So much of “Ready Player One” consists of following these characters around as they jump from one challenge to the next, solving one problem before moving on to the next problem, with clues from the movies, music and video games Halliday loved. But this instinct leads to the film’s strongest sequence of all, which finds the characters’ avatars landing right smack in the middle of “The Shining.” I wouldn’t dream of giving away which elements of Stanley Kubrick’s film they explore—or which rooms of The Overlook Hotel. But I will say it is the cleverest use of CGI within a live-action setting, and it upends our expectations of a pop-culture phenomenon rather than simply regurgitating something we know and love back to us. It comments on why “The Shining” matters while also giving us the opportunity to see it unexpectedly from a fresh perspective.

More of that kind of multi-layered approach could have elevated “Ready Player One” from a rollicking, name-dropping romp to a substantive tale with something to say about the influences that shape us during our youth and stick with us well into adulthood. Oh, and the answer to that John Hughes question? It’s Shermer High School, Shermer, Illinois, 60062. 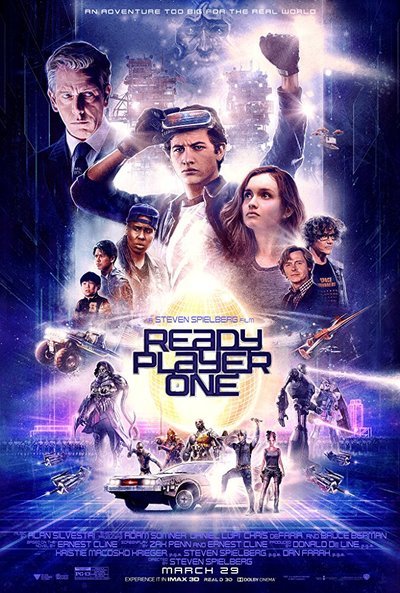