The superhero genre has gone through dramatic changes since Bryan Singer directed “X-Men” in 2000, and now finds itself in a precarious place. The city-level destruction that characterizes so many third acts has become visually rote and morally abhorrent. And how many more movies can we handle about white men given great power who churn out jokes and punches with equal aplomb? The genre desperately needs to diversify not just in terms of race and gender but also the kinds of stories on which filmmakers choose to focus. “X-Men: Apocalypse” should be a corrective measure, considering its ensemble allows for the opportunity to focus on popular female and people-of-color characters. Instead, it magnifies all the worst issues of the genre, serving up a story that would have felt dated five years ago.

"X-Men: Apocalypse" is a confused, bloated mess of a film. There are several films crammed into one, all battling for the spotlight, and none of them wholly work; there is really no central storyline or heart to the film. The first hour is almost entirely in service of setting up new players and establishing what the veterans are up to. Charles Xavier/Professor X (James McAvoy) is successfully running his school for mutant kids. Raven Darkholme/Mystique (Jennifer Lawrence) is rescuing mutants, including the walking punchline Nightcrawler (Kodi Smit-McPhee) on her own, and struggling with being seen as a hero. Then there are the teenaged Scott Summers/Cyclops (Tye Sheridan) and Jean Grey (Sophie Turner) who are struggling to cope with their powers and fledgling attraction to each other. Sheridan and Turner seem to actually be enjoying themselves but their development staggers under the weight of everything else going on around them; Jean grappling with the dark side of her abilities is especially fertile ground. One of the few evocative scenes involves her having a nightmare which rocks the school and burns the walls of her room before Xavier comforts her. Even though she gets a big hero moment at the end, it doesn’t land well, given how poorly she’s developed. Singer doesn’t offer the scant interesting moments enough room to breathe. He’s too interested in hurtling to the next plot point, the next introduction, the next fight scene.

The greatest sin of “X-Men: Apocalypse” by far is how terribly it wastes some of the greatest modern actors.

Michael Fassbender can’t give Magneto’s storyline the emotional depth it needs. But could any actor distract from how that storyline embodies the most onerous cliché in regards to the treatment of women in comics? How many more wives and daughters will be killed in these kinds of films in order to give a male lead some angst?

As the movie's world-destroying, god-like mutant, Oscar Isaac struggles to make Apocalypse even the least bit menacing. How can an actor as charismatic and dynamic as Isaac feel so torpid here? The failure to make Apocalypse engaging is mostly the fault of Simon Kinberg’s script. These operatic, world-destroying villains don’t seem to work on-screen as they do in comics. Their motivations are—at best—confusing and nonsensical. They seem so disconnected from the world the heroes move through that they almost exist in entirely different films. Perhaps, “X-Men: Apocalypse” also exhibits the worst traits of these sort of stories in the comics, which can be damningly inert, nihilistic, and overcrowded on their own, before even being adapted for the screen. Despite Apocalypse’s backstory and grandstanding, he spends more time imbuing his Four Horseman with power than wielding his own.

The rest of Apocalypse’s team are the smug yet forgettable Angel (Ben Hardy), Psylocke (Olivia Munn) and a young Storm (Alexandra Shipp). None of these characters are all that interesting but Psylocke and Storm embody the ways this entire series has failed its female characters; Psylocke is such a one-dimensional villain she seems two steps away from twirling a mustache. Singer and Kinberg are seemingly incapable of developing more than one female character at a time.

There’s also something deeply troubling about a series that trades in the language and ideas of the Civil Rights Movement without caring one iota about its characters of color. Storm is once again given very little to do. She has none of the emotional interiority, swagger or complexity of her comic counterpart. Jubilee (Lana Condor) is such a non-factor she could be taken out entirely and nothing would change. Raven and Jean are slightly better served, but Jean’s development is too inconsistent to leave much of an impact. Raven comes off far worse due to Lawrence's obvious disinterest in the role, coasting from scene to scene with none of her trademark charisma. When Raven reverts to her natural blue form (which is probably one of the worst translations of a character from page to screen in modern comic book films) her performance somehow becomes even more unengaging.

While much has been made about how superhero films rely on the destruction of cities in order to make the stakes higher for heroes, “X-Men: Apocalypse” takes this idea to the next level with startling violence. It isn’t just one city that hangs in the balance, it’s the entire world. The destruction in the third act is so wide-ranging, so cataclysmic, that it zaps the film of any tension. There is no sense of danger here, only the distinct feeling that nearly everyone involved is counting down the minutes until this whole affair is over.

There is one scene involving the surprisingly fun Quicksilver (Evan Peters) that gives “X-Men: Apocalypse” one of its only visually interesting moments. He uses his super-speed to traverse through Xavier’s school saving people from an explosion, as set to “Sweet Dreams (Are Made of This)” by The Eurythmics—a confounding music choice, to say the least. Singer finds some physical humor and levity in Quicksilver’s ingenious ways of saving everyone.

But it’s the only scene in a film almost 150 minutes long that gets close to evoking the bright-colored, zany nature the comics can delve into at their best. It isn’t enough to save what proves to be an emotionally empty and morally confused film. “X-Men: Apocalypse” isn’t just the low point in Singer’s series, it represents one of the ugliest superhero films in recent memory. 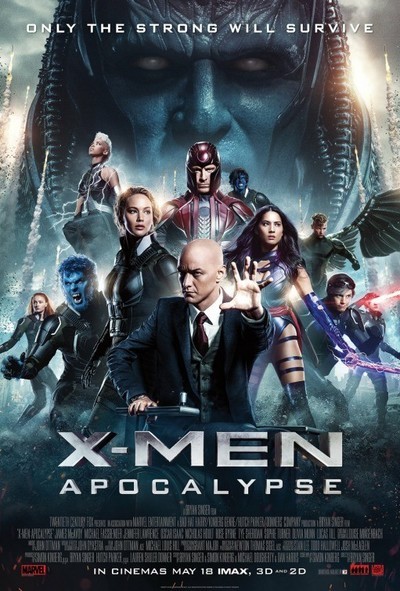 Rated PG-13 for sequences of violence, action and destruction, brief strong language and some suggestive images.

Lucas Till as Alex Summers / Havok